Victoria Osteen - Have a Peacemaker's Heart 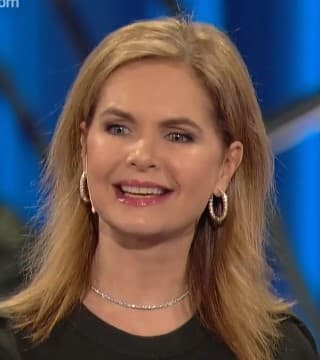 Yes, we are a grateful people, amen? I want to encourage us all today to have a peacemaker's heart, a peacemaker's heart, the heart of a peacemaker. You see, we all want to live in peace. We all want people to be at peace with us. We want peace in our families, we want peace in our homes, but the way we're going to have peace is to make peace. "Peacemaker" is a compound word, peacemaker. We should be the maker of peace, the maker of peace. You see, we have the ability to draw the line in the sand and say, "I'm not going to step over this line into strife, into division. I'm going to make peace"?

We're all from different backgrounds. We have different opinions, different ways of doing things, so we have to learn that peace is what's going to bind us together. You know, it's so interesting in families and with co-workers and in partnerships with business, husbands and wife. The interesting thing is this: we start out good. We have the same goal in mind. We want to be successful at this task. We want to have peace in our homes. We want to raise kids that are thriving and well able to accomplish things. We want to have financial security. These are all common goals that we start out with, but somewhere along the way because we differ in our personalities and the way we do things, we begin to get in conflict. We have the same goal, but we do it differently, and that conflict sidetracks us and gets us off course so we don't have the desired outcome, or it extends and prolongs the outcome.

You see, those are the things that, at the end of the day, it's not the way you do it or I do it that's going to bring happiness. At the end of the day, it's going to be peace that binds us together in unity, that brings the happiness, the achievement, the outcome of the goal. You see, there is a place in your spirit that says, "I am a peacemaker, and because I'm a peacemaker, I can trust God to fight my battles for me. I can trust God to bring the outcome, even if it's not the way I would do it".

The attitude of a peacemaker is what we all need. We're all going to face challenges along the way. Those challenges are getting along with people, because we all want our way. We all want to do it our way. Our way or no way. You know sometimes it can get to the lowest part of our maturity, and it can be, "If you don't do it my way, I'm not going to be happy. In fact, if you don't do it my way, we're not moving forward from this point". That is what is hindering our outcome. We've got to learn that if we want peace, it starts with us. We can make it.

I was talking to a beautiful, really sharp, brilliant young girl the other day, and we were having a conversation. I could just see how sharp she was and with it and right on the ball, and she began to tell me, "I have a strong personality. You know, I love to win. I love the feeling of winning". She says, "There's just something about being right. It's a great feeling". Then she paused, and she said, "You know, those traits of mine, those personality traits, I'm realizing they're beginning to slowly demise my marriage. They're beginning to change the atmosphere of my home. It's beginning to affect my children".

You see, if you have to be right all the time and you love that feeling of being right, you're making other people feel wrong. You see, we don't want to make the people in our life feel wrong. We've got to let other people be right. We've got to allow them to be right. It doesn't mean that you have to agree with everything that they're saying. Just let them be right. It doesn't make you wrong. It makes you a peacemaker. It makes you a peacemaker. It makes you a person who says, "I'm going to make peace because I don't want to be right all the time. It's too costly. It's too expensive. It isn't worth the price of my home, of my family, of my children, of my job. It's too costly". We have to be willing to be a peacemaker.

I looked at the synonyms for peacemaker, and listen to some of these words. It's diplomat, arbitrator, mediator, calmer, soother, go-between. Sounds like the characteristics of Jesus, doesn't it? It sounds like the attitudes that he walked this earth with, and he won anyway. You see, he is saying our attitudes should be like that. You see, he made peace for us so that we could make peace for others, we could be reconcilers of peace.

When Joel and I were really young in our marriage, before he was ever the pastor, we were at a meeting, and he was talking to this gentleman, and I came up a few minutes into the conversation, but this gentleman was talking passionately and really had these convictions about what he was talking about. He was going on and on and to me some of them sounded a little unrealistic and a little bit wrong, in my opinion, but I wasn't going to say anything because I really wasn't part of the conversation, so I just sat there and listened, and I looked at Joel, and Joel was standing there with a pleasant look on his face. He was being very cordial, and I thought, "Oh, okay, all right".

So, as I was standing there just listening to the conversation, a little while later Joel had somehow given us an exit point. He had dismissed us and said, "Hey, we got to go". So, as we were leaving a little later, we were in the car going home, and I said to Joel, I said, "Hey, you know, who was that guy and what did you think about his opinion? You know, I don't know what I thought about it. I don't know if I agree with all that". I said, "Did you agree with his opinion?", and Joel said, "No, I didn't". I said, "Well, you were standing there so nice and everything. I thought maybe you did". I'll never forget what he said. He said, "Victoria, I wasn't put on this earth to straighten everybody out".

You know, some people think they were. They're the judge and the jury. I thought that was so profound, very deep. I thought, "I like that. I'm going to remember that". Have you ever interjected in a conversation and later on when you left, maybe when you got home, you thought, "Why did I do that? I just wish I wouldn't have said anything"? We ought to adapt that motto, "I wasn't put on this earth to straighten everybody out". You know, that doesn't mean that we can't have opinions, likes, and dislikes that differ. You know, even in the most difficult conversations, if we will come from a place of honoring God, from a place of a peacemaker, a place of unity, that's how we're going to make it in this life.

That's how we're going to keep the bond of peace. We all know that we have to have difficult conversations, but it's not about having our way. It's about saying, "God, I want to converse with this person. I want to be intelligent about it, but I don't have to have my way. I can let someone else be right and, God, it doesn't have to be done my way. There is more ways to a point than just my way. There is more ways to a common goal than just my way". Sometimes you've got to know when to take your hands off of it and when you got to say, "God, this isn't the way I would do it, but you know what? I'm going to zip it up because I'm going to keep unity through the bond of peace, through the common ground of peace, and, God, I'm not going to try to fight my way. I'm going to allow you to step in".

You see, God says you're not blessed when you're right. You're not blessed when you win every argument. He says the blessing comes from being a peacemaker. See, there's a blessing on the other side of that promise, and we've got to walk in that place of a peacemaker's heart. The Bible says in Ephesians, it says to bring unity through the spirit, through the bond of peace. If we're going to achieve unity, we're going to have to be active, and we're going to have to take the initiative to do what it takes to make the peace. The scripture says, you know, as far as it's up to you, the buck stops there, be at peace with all men. Let's be instruments of peace, because there is a blessing in the life of a peacemaker, amen? Amen. He's an awesome God.