Victoria Osteen - Have a Compassionate Heart 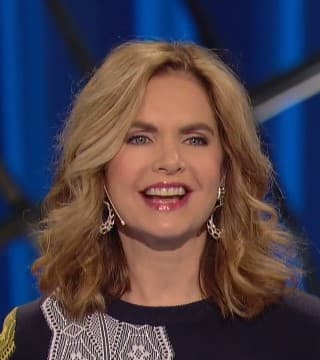 See, God wants to flow through us to other people. He wants to use us as an instrument of love. He wants us to be the hands and feet of him right down here on this earth, but we're never going to be that until we begin to understand this feeling that God wants to put in us so that it can flow out of us. It says in John 3:17: "'If anyone sees his brother in need and yet closes his heart of compassion, is the love of God in him'"? Question mark.

You see, this scripture says we all have a heart of compassion, and it indicates that this heart, this chamber that God wants to work through, can either be opened, or it can be closed. It can be shut off, and as a result of it being shut off, the love of God cannot flow out of it. We don't recognize what God wants to do through us, and can I tell you right now, God wants to work through you? He's not looking at your mistakes. He's not looking at your past. He is looking at who he wants you to be and the things he wants to do through your life, because you are very influential. You hold value and substance, and in your sphere of atmosphere, wherever you travel, God wants you to use what he's given you, and the first way to use what he's given us is to recognize that God wants to put in us the ability to understand this compassion and how it works in our life.

You see, I believe that's the reason some people are very unhappy today, is because they've closed their heart of compassion. They're not paying attention to the people around them, to the world around them. You see, if we're going to live this full life in the abundance that God has given us, we need to stir up this heart of compassion and say, "God, give me eyes to see what you'd have me do today. Open my mind and my heart to the people who need your love". All through the Bible, we can read this when Jesus walked the earth. He saw the multitudes, and the Bible says that he was moved with compassion. He saw the sick. It says that he had this deep inward moving of compassion. He saw two blind men. They were yelling his name, "Jesus, son of David, have mercy on me". It says, "He was moved in his inner being with compassion".

It's interesting because Jesus walked over to where those blind men were. He turned right around, he walked over, he looked them right in the face. They couldn't see him, but I bet they could feel him. They could feel him. They felt that compassion. They said, "Have mercy on us". He said, "What do you want"? They said, "We want to see", and do you know that compassion that was in Christ Jesus went out of him in power and healed those two blind men? You see, compassion is powerful. Compassion can bring forth miracles. You see, Jesus fed the multitudes because of the compassion. Jesus healed the sick, opened blind eyes because he understood that God was saying, "This is your time, move out in compassion".

You see, he didn't just feel sorry for them. He didn't just say, "Oh, well, that's pitiful. Aww, man, that's too bad. Oh, my heart hurts for them". You see, his compassion had action. It moved, it had action, and you see, you may say to me today, "Well, I don't think I can open blind eyes. I don't think I can heal the sick. I can't feed the multitudes". But do you know, the compassion that lives in you, when you're aware of it, it will cause you to move out in power? It will give you the desire to help someone else, because, see, it's not you. It's the power of God in you being released to someone else for a miracle. How freeing is that? You know, don't put the pressure on yourself. Say "God, I understand what you're doing on the inside of me, and, God, I am going to reach out and move in the compassion that you've given me, this divine flow of love".

There was an expert in the law when Jesus was saying this scripture, and he said, "Jesus, how am I supposed to know who my neighbor is? What classifies a neighbor? Who am I supposed to love like I would love myself"? And Jesus told a parable, told a parable about a man who was walking to Jericho. A band of robbers came and attacked him, beat him, bruised him, stoled all he had, and left him on the side of the road for dead. A priest came by, saw the man, went to the other side of the road, and walked past him. You see, we can't be too busy to notice. You see, it doesn't disqualify us because we go to the other side. A Levite man, probably assistant to the priest, they had something to do and somewhere to go, he saw the man.

The scripture says that "He walked to the other side of the street and kept on his way, totally ignoring the wounded man". But then there was a Samaritan. He was walking down the road, said, "What is that on the street"? Looked over there, and it was a man, wounded, laying there bleeding, about to die. The Bible says that he bandaged him up, took care of him, put him on his animal, took him to an inn, gave the innkeeper money and said, "Hey, can you help me take care of this guy? I'll give you money. I'm going to have to leave, but I'll come back, and I'll pay any expenses that you've occurred from helping him".

You see, we're all busy. Even that man must have been busy. He had to leave to take care of something, but he said, "Look". He reached out and said, "If you'll help me help this man, I'll give you what you need". Jesus said to the expert of the law, "Which one of these three men do you think was a neighbor to this guy"? The expert of the law said, "The one who showed mercy", and he said, "That's right". He said, "Now you go and do the same, do the same". Jesus is saying, "You go and do the same. Have mercy, open your heart of compassion. Let me work through you. Let me use you in a powerful way. Don't worry about trying to do it yourself. Understand that the flow of compassion, the divine love that I'm pouring out has power in itself".

You see, about eight years ago, I lived next door to a beautiful family. It was a wife and a husband and two beautiful young girls, and the wife was my age, and she came down with cancer, and she eventually died of cancer. I went to the funeral, and I began to talk to the young girls, and they were so precious. My heart went out to them, and so I became friends with the older girl. She was probably only 12 years old, but I told her how much I loved her and that I'll do anything for 'em. I'm right next door. And invited her to church, and she came to church on several occasions and loved it so much. But shortly after that her family moved away, and I lost touch. Life gets busy. I didn't know where they moved to.

You know, just about three days ago, I was putting on my makeup, getting ready for the day, getting ready to go out, and something in my heart just thought about this girl. Now, I thought about, "Where is that young girl"? I began to think about her just right out of the blue. I wasn't thinking about her. It just came into my heart. I don't know why God put that in my heart after eight long years, but I really feel like that it was his divine flow of love for this girl, and I began to pray for her. I began to say, "Lord, I don't know where she is, but you know where she is, God. I'm asking you, whatever she needs, father, meet every need that she has. Give her wisdom, God. If there's anything coming against her, father, just stop that scheme right now, in Jesus's name", and I began to pray for her and pray for her, and that compassion just came up out of me, and I continued to pray.

I told Joel later, I said, "You're not going to believe. God put this in my heart. I don't know what all he wants me to do with it, but I'm going to try to reach out to her". So I tried to look her up on Facebook and I couldn't find her. So I've asked a couple friends, "Hey, do you remember this family? If you know where they are, could you tell me or get in touch with them and let them know that I am thinking about them, and one in particular, the girls. Could they maybe reach back and touch me, or give me their number and I'll touch them"?

You see, my heart of compassion was there. It's not just enough to feel sorry for those girls because they lost their parents. I want to move in this compassion. I want to move out in this compassion, because I think to myself, "What if it was my children? What if it was my son and my daughter, and I left this earth, and someone thought about them, but that's all they did was think about them"? I would so want someone to reach out and touch them, to pray for them, and you see, God may put some people on your heart.

Maybe you've thought about some people. Maybe your spouse was saying some things you didn't recognize yesterday, but today you think, "Wow, they were hurting". Listen, God wants you to act on that compassion. You see a co-worker at work sitting across the room and you just, you feel like, "Oh, man, golly, I kind of feel sorry for them". Recognize that's God. He's saying, "Move, move, reach out". You'll never know the impact of what a phone call can do, or the significance of someone, of your words saying to someone, "Hey, I'm thinking about you. I care about you. I love you. Hey, you're going to make it. I'm praying for you".

You see, those simple words of hope can turn someone's life around, can open blind eyes and give them a new perspective, can heal a heart and change the course of their destiny. You see, God has called us to move out in compassion, to be the hands and the feet of Jesus. So, today let's pray, "God, open that heart of compassion. Let me see hurting people around me. Yeah, I may have to stop what I'm doing. I may have to take some time, maybe even some money, but, God, I know that when I'm someone's miracle, you will make sure I get all the miracles that I need", amen? When you're following love and compassion, you're following God, amen? Amen, he's an awesome God.