Victoria Osteen - Fight Fear and Discouragement with the Word of God 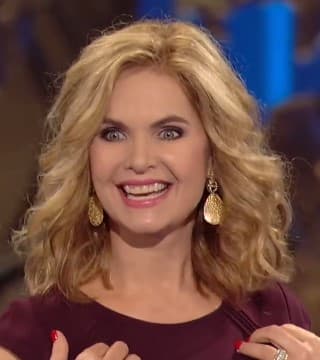 You may be seated. It's good to be in the house of the Lord. How many of you, like me, want to go from just knowing the promises of God to walking in to the promises of God? It's one thing to know something, it's another thing to use what you know to get where you need to be. You see, God has already reserved a seat for you. He's already carved out places for you. He's already reserved territories for you to conquer and for you to occupy. We know that, that God has things for us. That's a promise. But how we get to that promise is up to us. God was speaking to Joshua. He was telling him, "Joshua, I have a place that I want you to go, but there's going to be two enemies that you're going to face".

Now, you all know the story. Joshua and Moses were brought out of captivity and were being transformed, or being journeyed to the Promised Land. So they came out of captivity, but they wandered in the desert. So they came out of something, but they never fully got to where God had promised them. So it was Joshua's turn. Moses had died, and Joshua was standing in the place that he had stood before. Again, God spoke to Joshua, and he said, "Joshua, I want you to listen carefully to my instructions. I want you to listen carefully. There's two enemies that you're going to face". Listen to what he said in Joshua 1. He said, "Joshua, be strong and courageous". Then he went on to say, "Do not be afraid and do not be discouraged. For the Lord your God is with you wherever you go".

Okay, he broke it down for Joshua. He said, "Joshua, this is what you need to be, strong and courageous". He said, "Joshua, this is what you don't need to be, afraid and discouraged". See, God made it clear, "Joshua, I'm taking you to a place that you're going to occupy, but you can't be afraid and discouraged". God wasn't making a simple suggestion. He was saying, "Now, don't be afraid, don't be discouraged, be strong". No, God commanded Joshua. He said, "Have I not commanded you? Have I not commanded you, 'do not be afraid, do not be discouraged'"? You know, he didn't say, "Joshua, don't feel discouragement. Don't feel fear". What he was saying was, "Joshua, don't identify with fear. Don't let it become part of your identity. Don't let discouragement define you". He was saying, "Don't hang around with fear and discouragement too long". He says, "Because you're going places".

See, so many times, you know, we think, "Wow, these giants, they saw these giants". He was saying, "It's not the giants. It's not the Hittites. It's not the Canaanites. It's not the Jebusites. It's not even the Cellulites that you need to be afraid of". He said, "Joshua, your biggest enemy is fear and discouragement, fear and discouragement". You know, sometimes, when we feel fear, we entertain it. Fear causes us to be discouraged, and if you hang around with fear and discouragement long enough, it's interesting how you can wrap it in a circumstance. "This is the reason this is happening to me". We can literally take fear and we can make it such an excuse that we can literally put a face to it. We can name it. "See, it's Sarah in the office. That's why I can't get ahead". "It's my husband. He's been pushing me down. He won't let me blossom". "I'm not as talented as other people. That's why I'm not where I should be". "It's my finances. Man, if I had more finances, I could do so much more".

You see, we create scenarios and situations, but at the root of every one of these is fear, and fear causes discouragement, and discouragement causes us to be tormented. It causes us to sit down instead of move forward. See, we cannot let fear be an excuse for our life. God has already given us the promise. He's already said, "Here's the promise". It's optional if you're going to get there, and he's saying, "Your enemies are fear and discouragement". You know, I was talking to a girl the other day, and she said, "I'm in this ministry, but it just seems like that, you know what, no one will let me do what I want to do, and, you know, it's hard for me. I feel it difficult. I'm just going to quit".

I have seen so many people quit, give up a position because of people. The first time that I ever spoke in church, I was afraid. I was scared. I wrapped that up in an excuse. I became discouraged. I remember, "It's Sunday again". It was like a black cloud was following me again. I named it. I got in agreement with it. I was miserable. Then I realized, "You know what? It's fear, it's fear. It's wrapped up in all these other things, but it's fear that is the root of why I'm miserable", and, you know, you think about it. We've gotta recognize fear and discouragement, and we have to unwrap it for what it is.

See, it was the enemy trying to steal my destiny, and can I tell you, he's going to try to stop what God has started in your life any way he can. He'll use people. He'll use circumstances. He'll make it look like something else. But at the root of it all, it is fear. Fear always raises its head as lack, not enough, "I'm not enough. I do not have enough. There is lack in this situation. That's why I can't do it". It's always based out of lack and not enough, not good enough, not having enough. Listen, do you feel discouraged sometimes? What are you fearful of? That is the enemy's way of stopping you.

See, too often, we're fighting people. We're fighting our circumstances, and God is saying, "Don't fight people. Fight fear and discouragement". Listen, don't let anything or anybody rob you of your destiny. Don't let people steal your future. See, God told Joshua what he should be. He should be strong and courageous. Told him what he shouldn't be, "Don't be fearful. Don't get discouraged", and then he told him how to do it. He said, "Joshua, you're going to fight fear and discouragement one way, and one way only. It's when you take hold of my word, when you get it out of your mouth, when you chase discouragement and fear off with what I say, when you get it into your thinking and you meditate on it, and you let it drop down in the very depths of who you are".

See, God didn't leave the building because you're facing a hard time, you're facing people who are difficult. He said, "I will be with you wherever you go", and if God will fight Joshua's battles, God'll fight your battles too. See, it was not the fact that they were going to starve in the wilderness, thirst to death in the wilderness, get blocked by the enemy. We know that. God opened the Red Sea. He struck water out of a rock. God turned things. He let quail come into the camp so that they could eat.

See, that wasn't a problem. The resources, the battles weren't a problem. God said, "Don't worry about all this stuff. You fight fear and discouragement with the Word of God because I'll be with you everywhere you go. I'm not going to leave you. I'm not going to forsake you". I love what it says in one version, "I'll never give up on you. Even when you're feeling fear, even when you're feeling discouraged, hey, that's not enough to make me give up on you. I'll be there wherever you go. My promises are true. How you get there is optional". If you'll fight fear and discouragement, you too will get to your Promised Land, amen? Amen.