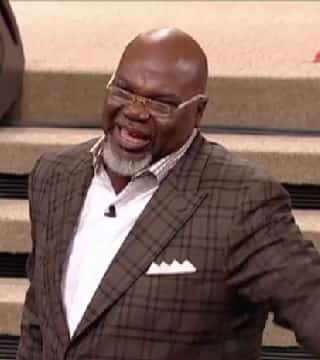 Greetings, in the name of our Lord and Savior Jesus Christ. I'm Bishop T.D. Jakes, The pastor of the Potter's House, here in Dallas, and I'm called to serve you. And I'm going to serve you by sharing with you a message that I shared with our congregation. It had strong impact on our church. And I believe it will bless your life. We are called to serve the kingdom of the Lord. We have to believe we are called for an important purpose. People who seek after the Lord's calling don't always fit in with other people. The message today is appropriately called, "Called". And if you are called, you'll understand what I mean, as we go into Romans 8:29-31. Hear ye the word of the Lord.

God's call will disrupt your life. You had everything planned, didn't you? And I'm going out on Tuesday. I see Fred on Thursday. I'll call Bobby on Saturday. I'll see Jimmy on Sunday for brunch. I had it all worked out. When I'm 25, I'm going to do such and such. By the time I'm 32, I'm going to do such and such. And then God says, "Helen"? Messes up everything. What made you come anyway? What made you give up a man you could see for a man you couldn't see? What made you give up high for joy? Yeah. Is that your spirit knew its voice. Because he knew you before. Them he called. He called what was his.

Yeah. I only bother what's mine. I don't want anything that ain't mine. If you're mine, come here. Yeah, if you're really not mine, leave me alone. Go about your business. I only want what's mine. You don't hear what I'm saying. That was worth you getting up out of the bed this morning. Yeah. Only call to you what's yours. Those he did foreknow he did predestinate. Them he also called. Not those. Not they. Just them. Those he did foreknow. And little by little, as you become more spiritual, you're coming into an awareness of who you really are. And the more you recognize who you really are, the less you are willing to be who you were.

Let me, one more thing I want to pull out of that foreknow, because I want you to understand the debate between this predestined and foreknowledge theological debate, for those who can eat on this level, there's a big argument, because they think when God predestines you, he makes you be saved. And that wouldn't be fair, because he makes some people be saved, and other people he doesn't make them be saved. And they're having a big argument about all of that.

That's as silly as saying that the weather man who forecast the rain made it wet. Even though he forecasted, he foreknew it. He doesn't make it rain, because he knows it's gonna. And Thursday the temperature will be 107 degrees. Don't worry about it. We'll get some relief on Friday morning. The rain will break out at 8:15 in the morning. Did he make it rain? No. But he foreknew it would. He foreknew you. He foreknew you. And out of the basis of that foreknowledge, not only knowing you before, he predestined you. Pre-, pre-, in advance, before. Destine, ending, okay?

So before, ending you. He predestined. He carried the umbrella, because he knew it would rain. He didn't make it rain, but on the basis of his foreknowledge, he set things in motion to accommodate what he foreknew. Because he foreknew you, he predestined an environment that would cause you to be rejected out of several places so that you would not rest beneath your destiny. He disrupted your circumstances. He moved your life around. He ordered your steps. He determined who you hooked up. He determined the level of your rejection. He prescribed the level and intensity of your pain so you would have enough conviction when you got up to be forceful about this. He pulled you backwards far enough so you would shoot forward far enough on the basis of this foreknowledge.

Whoo. So if I'm one of them, if I'm one of them, it's all good. It is all good. You left me. It's all good. I'm wounded about it, but it's all good. Because God's going to use the fact that you left me, and the pain I have about it to push me into the purpose that he has predestined. So you couldn't stay, you had to go. Because you came in my life because you had a role to play. Those he did foreknow, he did also predestinate. And them he also called. Call is the hinge to the text. He could foreknow me and me not know it. He could predestine me and me not know it.

This is all stuff that's done in the kitchen before the customer gets the entree. This is God's divine prep work. It all happened in the spirit world before you got here. But call cannot be done independent from me. So call is when he brings into time what he has done in eternity. And makes me aware of what has already been done, even though I cannot see the chef prep the meal. I am the beneficiary of the preparation. He did it where I couldn't see it. He's been marinating it all night. When he brings it to me, I benefit from what was pre-marinated back in the kitchen.

He heard my voice. He responded to the call. What he doesn't know is that I planned to call him before I called him, for I foreknew I would use him in this illustration. And I predestined to be this far from him so he would have to walk this far so you would get to see it so I could use it. And I did all of it without telling him. And he didn't know he would be here today until I called him. But I predestined and predetermined for him to stand in this spot before we ever even got to church. And you never even knew a thing about it until I...

Touch your neighbor, say, "Something happened to me". I was just happy. I was just chilling. I was just drunk. I was just high. I was just having a good time. I was building my business. I was going on with my friends. I was hanging out with all my cut buddies, my running dogs, my constituents, my contemporaries, my intellects and my friends. And then all of a sudden, he messed up everything, because he... You get it?

This is problem I have with this generation. They are so quickly, they are so quick to define themselves in the process of searching. He called you into a body. And then he called you into the body of Christ. And now when you're called into the body of Christ, he is now asking you to forget your experiences in the flesh. Do I have a thinking church this morning? Now, he says, "Forgetting those things which are behind, reaching to those things which are before, I now call you into the body of Christ, okay? And you must be born again". Born of the water. Born of the spirit. Born again. It's happening again. The whole process is happening again.

And the closer I get into who I am the more I must forget who I was, so I can remember who I am. I am shedding off what I had before that I might capture what I have right now. And I'm now called into the body of Christ. Second call. Third call. I am called into my purpose. My purpose. My thing. My it. My thing. That when I do it, I get so much out of it, I would do it for free. If you get that third call, that's a mind-boggling thing. Because once you find your thing, it satisfies your spirit.

Can I go a little bit deeper? This is not a shouting message, but can I go a little bit deeper with it? They were doing an interview with me, and they said, "How could you Pastor back in the hills of West Virginia"? I'm not talking about where I ended up in West Virginia. I'm talking about where I started in West Virginia was back in a city where they had one red light in the whole city. In the whole city. They called it the light. You laughing. I'm telling the truth. Where is the Go-Mart at? Right by the light. One light in the whole town, and I was Pastoring there. Seven people in the congregation. Ten dollars meal allowance. Wife and two kids. Sleeping in the church in between morning and evening service, sleeping on benches with my wife pregnant.

Your job is an important job when you think it's important. But some of you are forsaking your calling trying to find something big and impressive so people will think you're important. But let me tell you something. People think you're important will not raise self-esteem. That's why they call it self-esteem. Until you think highly of yourself, me thinking highly of you will never be enough. You've got to believe that what you are called to do is important. Because, let me tell you something, until you believe that, you won't do small things with excellence. And if you don't do small things with excellence, you'll never get big things. Let me say it in Bible language. If you be faithful over a few things, I'll make you ruler over many. If you think a few things are important, I'll make you ruler over big things. But until you value the role you play and the place I put you in, I can't give you anything else, because you've got to learn excellence on your level.

I had to stop and praise him for preaching big messages in little churches. For teaching great classes to crowds of three. Because until you learn to see what you're doing right now as a big thing, you can't have nothing else. I don't know who I'm preaching to in here, but God is about to promote you. Because you are excellent on your level. Slap seven people and just say, "Promotion". Promotion only comes when you are excellent on your level. You never promote anybody until they are excellent at their level. And when you get excellent at your level, you don't have to fight for promotion. Promotion will fight for you!

Ask your neighbor, "Are you excellent on your level"? No, you're stepping all over top of where you're at trying to get to the next place, and God's shutting the door because he's saying, "You haven't done everything you can do at the place you're at. But if you become excellent where you are, I'll promote you"! Touch somebody, say, "Something is going to happen in here this morning". Somebody is going get a breakthrough in here this morning. Love the skin you're in. Love the child you got. Love the man you're with. Love your own house. Love your apartment. Clean that sucker up. Dress it up where it is. And God... Hey! Can I get a praise in the balcony? Praise him up there! Praise him over there! Let everything that has breath, praise ye the Lord! Shout, "Yes"!