Steven Furtick - Even When I Don't See It... He's Working 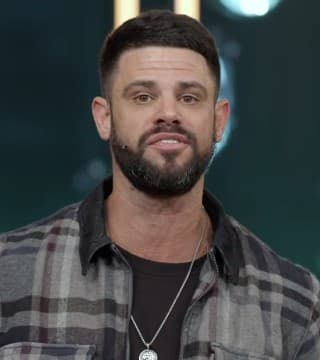 How could I illustrate this? I'm going to try to illustrate this real quick. This is very small, but what you're supposed to see you can't see. This is very small. Right? Something very small can block out something much bigger. Now you can't see anything that's supposed to be seen. Something very small. Maybe it's no coincidence that I'm using this iPhone that has got some of y'all with stomach ulcers because you won't come off of it and see what's right around you or you won't use that Bible app. You have that other app open. What's it called? Insta…what? It's not Instagram right now. It's like Insta-gross.

It just makes me feel… If I stay on it too long, it's like I'm in an alternate reality, and now I can't see what is invisible. Something small can block out something bigger. Okay. Is that camera on? We didn't plan any of this, so pray for your preacher right now. Pray for the cameramen. I'm still six feet apart, by the way. I want y'all to know that. I'm just showing you this illustration, how something small…

This is what 1 Kings 19 says about it. Elijah, who was the great man of God who taught Elisha everything he knows in 2 Kings 6, because this is nothing new, because the same God who delivered me from the paw of the lion and the paw of the bear will deliver me from this uncircumcised Philistine too… The only reason Elisha knew what to see in the situation he'd never been in before was he had followed the great man of God, Elijah, the prophet, the one who called down fire on Mount Carmel. Do you remember that Bible story?

He said, "If God is God, serve him. If Baal is God, serve him. Choose this day who you will serve". God answered by fire. Eight hundred fifty false prophets, the prophets of Asherah, had to bow their knees. When Elijah got done with that miracle, he went up on a mountain and prayed.

When he checked the seventh time, he saw something very small, a cloud the size of a man's hand. Something so small. Three and a half years of drought came to an end because of something very small. But do you know what's weird? When Jezebel, Ahab's wife… Ahab was the wicked king. Jezebel was the one really running the show. One preacher said the last decision Ahab ever made was "I do", because after that Jezebel took over. She would kill the prophets. She was much more ruthless than Ahab was.

When Jezebel heard what Elijah had done, she sent a messenger to Elijah to say, "May the gods deal with me, be it ever so severely, if by this time tomorrow I do not make your life like one of them". "I'm going to kill you". But she couldn't. There are certain things the Devil can't do to you, but if he can get you to believe it, he doesn't even have to do it. If he can get you to get so blocked by something small… How could something so small…? Look at what Elijah, the great man of God, did in verse 3. Elijah was afraid, so he fled, and he ran, and he ran, and he ran. Jezebel couldn't kill him. So since she couldn't kill him, all she could do was convince him.

I believe this message is prophetic in the sense that you are allowing something small to block out something bigger. I promise you right now: God's calling is bigger than any crisis. Trust me on that and read your Bible if you don't believe me. That's how I can go through it: because I know God's calling is bigger. Why would I let something small block out something big when he hung the stars and named them? Why would I refuse to lift my eyes to the hills when I know where my help comes from? There is something bigger. There is something greater. There is something other on the other side of this. I wonder what's on the other side of this that is so big the Enemy sent a storm to disrupt your peace, to destroy your joy. God is with us in this place right now. Do you feel that?

The prophet said, "Those who are with us are more than those who are with them". He must have went to public school. This dude is bad at math. Elisha is bad at math. The servant is like, "Huh"? Because he's counting. Right? He's like, "Those with us are more than those with them. All right. So, one, two", and then he starts counting the enemy. "One, two, three, four, five, six, seven, eight, nine, ten, eleven, twelve…" I know somebody is sitting there listening, like, "Well, Preacher, this is cool. This is neat. But have you seen the news"? I'm like, "Yeah, I saw it". I see the statistics, but what good is it going to do for me to be afraid? I want to be aware, but there's a fine line between aware and afraid.

Let me just say this, and we can edit it out if it's too strong. I think it's dangerous when we start watching a death count on a ticker like it's a score in a baseball game. I think that kind of crosses a line. I think it puts us in a state where we have made entertainment out of misery, and then we become addicted to being afraid, and it kind of feels comfortable. It's like, "Oh, this is normal". Do you know one of the reasons Elijah ran from Jezebel? He was used to running. He had been hiding for three and a half years, so he did what came naturally.

A lot of us, when we get in a fear state, it's because it feels familiar to us. This is like group therapy, isn't it? To know that sometimes we feel more familiar in a state of fear than we do in a state of faith. What the prophet gave him was a different way to do math. I wrote in my notes, "This is miracle math". Miracle math is like this. Are you ready? "There's more of us than them". Huh? Close your eyes and you'll see it. I'm not talking about what you can see; I'm talking about what's more real than what you can see. Close your eyes and you'll see it. This is miracle math.

It's like Gideon. "You have too many men". "Too many men? I'm going to fight a battle. That's exactly what I need: soldiers". "No, you have too many, because if you go in with this many men, you will think it was you who won the battle". When he gets down to 300, God says, "Now go in the strength that you have". "Now go". It's miracle math. It's like Jesus. There are 5,000 men and women and children. What do you have? Five loaves and two fish. It's not enough. Right? It depends on whose calculator you're using. This is not Texas Instruments; this is the Son of God.

That's why he was scared. He was like, "My vision is 20/20, bro. I don't know what you're looking at". He was like, "No, no, no, no. Open his eyes". Paul called it the eyes of your heart. Perspective. Now, when the servant looked again (verse 17)… This is the whole message. He opened his eyes after the Lord granted Elisha's request. "…and he looked and saw the hills full of horses and chariots of fire all around Elisha". Let me tell you what's really wonderful about that verse. When Elisha prayed, help did not come; help was already there. When he prayed, "Open his eyes so that he may see", the Lord only had to show him what was already there.

When he looked, he saw the hills full of horses. They were already full. He just couldn't see it. He saw the hills full of chariots of fire. The fire was already burning. Do you know what didn't happen when he prayed? I don't know if you want to hear this or not, but it's true and I need to say it. God did not answer Elisha's prayer by eliminating the enemy. Instead, he illuminated his presence. Faith is not a lever I pull. "God, make it stop".

Faith is a lens I look through to see that God has been there the whole time. He's with you right now. "But I'm still scared". Abbey said, "I'm still scared". "Then just stay with me, and whatever is going on up there…" Whatever is going on out there, you need to stay with your Father right now. You need to stay in faith right now. The only way we can really deal with fear… If we stay in fear, we stay in frustration, and then we get stupid, because you are not very strategic when you're scared.

So don't be afraid. The only way to do that is to change the focus. The situation did not change in 2 Kings 6; the focus did. The only way I know to stop being afraid is to change what I'm focused on. I just need us right now to begin to ask the Lord to illuminate. Not eliminate. "O God, take the fear away". It doesn't work like that. "O God, give me all of the answers. Tell me the plan. I need the strategy". God said, "Before I give you the strategy, I want to give you your sight and shine light on your situation".