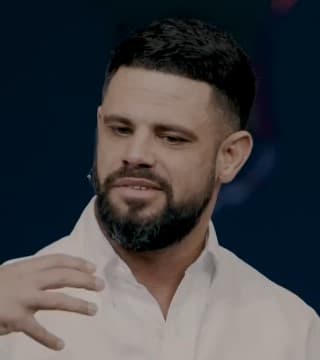 Do you know what kind of success sucks? The one you project but it's not real and you don't really possess it; when you need to appear a certain way. What happens is sometimes we get so addicted to the approval that comes from others we cannot receive the approval that comes from God, and that has to be an inner voice. Jesus did the will of his Father. He knew the voice of his Father. He did not see it; he knew it at a deeper level.

Now, we're living in a time right now where people want to be well known above all else, but there's a difference (this is how I was thinking about it) between being well known and widely known. It's the difference between fruitfulness and famous. Well known is like, "Oh, okay. A lot of people know my name" or "I'm popular", but if you judge the ministry of Jesus by popularity, he was a failure at the moment that he was fulfilling his purpose. Why that's encouraging to me is that being well known only requires that the God who made me has all of me and that there's no part of my life that is off limits to him.

I just want to talk to you about this today, because I'm meeting a lot of people who feel like they're failing, and they do not even recognize how much fruit they are bearing. Let that sink in. At the moment a seed goes into the ground and starts doing what it was created to do, to break apart, to change forms so it can produce what was in it… At the moment of its greatest realization of potential, it is broken and hidden. That means that in my life sometimes, the greatest moments of my maturity, when God is really growing me and really using me and really making a difference through me, are going to be the moments where I feel like I'm breaking, the moments where I feel like I'm hidden.

Obscurity is not the enemy. It doesn't matter if they know your name. It matters if you know what is inside of you. Blessed is the man who does not need the approval of people because "I already got it from God. I already got it. It's already mine. I'm walking in it. I'm living in it. I'm bathed in it. I'm covered by it. I am the righteousness of God in Jesus Christ whether you like me or not". How are you going to judge if you're a good mom? Whether your teenage daughter likes your decision-making? You're going to let the inmates set the curfew? Crazy. I remember when Oprah lost all that weight. When I was a little boy, my mom used to watch Oprah. She came on, and everybody clapped because she'd lost weight. A few years later, she came back and said, "I was the least healthy I had ever been in my life because of the way I lost the weight".

People will clap because you lost it. They don't care what it did to you on the inside. Let me give you another verse. In Luke 17:20, Jesus is talking about the kingdom of God. (I went straight from Oprah to Luke 17, because I am dynamic like that. I am versatile in this pulpit.) On one occasion, the Bible says… Because Jesus taught about the kingdom of God. In one translation, the phrase appears all throughout the New Testament 126 times. On one occasion, having been asked by the Pharisees… Those were his enemies. Let's talk about that.

You think success is having everybody like you. Then Jesus was a failure. We think success is for everybody all the time to be able to get us. "Well, they just don't get me". They're not supposed to get you. Only God can get you, because you are dysfunctional. The Pharisees didn't get Jesus. They didn't get what he came to do. They didn't get who he really was. So, on one occasion they asked him… This was not a purely motivated question, I might add. They were inquiring when the kingdom of God would come. I love the Word of God. Watch this. Jesus replied, "The kingdom of God does not come with your careful observation", by your standards of success. The Pharisees kept a lot of laws. They memorized a lot of Bible verses.

How do you know if you're a good Christian? If you memorize more Scripture? Then the Pharisees would have been the most successful, but they were actually the ones who stood in opposition to what Jesus came to do. Some people think they're good Christians because they read the Bible a lot. Maybe they just like reading. In the application of the Scripture growth happens, not the knowledge of it. So, how do you measure if you're more successful, if you're growing in God? It's if you are yielding more of yourself to him so you can yield the fruit of the purpose he planted inside of you. So, they're like, "When's the kingdom going to come"? We all want to know that. We all want to know, "When is God going to do what I want him to do"?

That's so good. The kingdoms of this world are out there. That's what they're marketing. When they market to you, they are trying to get you to hate here. The strategy of the Enemy is to get you to hate your here. The way he does that… Psalm 1 says the tree God plants will yield its fruit in season. I always skipped past the word its, but it may be the most important part of the verse, because it means that if I spend my time being frustrated that I can't bear your fruit… I can only bear Furtick fruit. Right? That's all I can bear. That's all I can be. All I can be, if I could say it this way, is the most fruitful Furtick I know how to be.

Now, my temptation is to see the fruit you bear or the life you have or the talent you have or the personality you have… I usually don't want other people's lives; I want other people's personalities, because they're chill. I wonder, "What would it be like to have just a day where you were not so uptight"? Some of y'all's personality looks so tropical, so sunny. "Wow! That would be so cool. Did you see how they just handled that? They didn't even get upset". But there's a certain way God wired me, within me. He will be like a tree planted by the streams that will bear its fruit, that will yield its fruit. Yield your fruit. Do your thing. Make your mark. Do your job. Hold down your spot. Stay on your post. If you're coaching, coach. If you're teaching, teach. If you're helping, help. If you are a shouter, shout. Yield your fruit!

I might not be famous, but I'm going to be fruitful. God created me to produce a purpose. I feel freedom coming through this house! I feel freedom from the frustration. God said he wanted to set you free from the frustration of trying to produce somebody else's fruit. "I'm such a good apple tree"… until you see some oranges. It's just the Word of God. Jesus said, "The kingdom is within you". He said, "You'll be like a tree planted by streams of water".

Now, the problem with a lot of us is we can't produce anything because we don't get planted anywhere, because it's not sexy to stay planted. Even preachers… Preachers do the weirdest stuff. How many sermons did I preach about Peter walking on water and never said anything about Andrew who stayed in the boat? All Jesus told them to do was get in the boat and go to the other side. Peter was the one who needed a spectacular sign. Andrew was content to just stay in the boat in the storm, because "This is what God told us to do". I'm looking for some people who will just go home and be a dad and be a mom and be a husband and be a wife. Oh, by the way, we live in a culture where you are not considered successful if you are still single at a certain age. By that standard, Jesus died a failure. "He'll be like a tree planted by streams of water". Streams. Isn't that what they call it on feeds… streams? To be planted by the streams of water produces the fruit that's already in you.