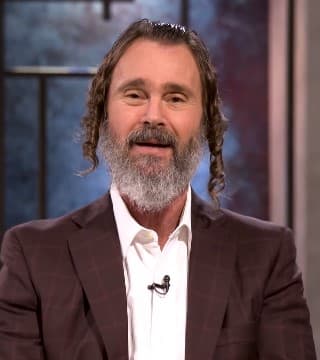 Passover as it's recorded in Exodus 12 and the other surrounding it, they all speak to us not of just what happened to ancient Israel, but about what is happening on earth and in our lives now. We're talking about the ancient Passover because we're in the Passover season right now. But what I'm doing is I'm taking the lessons from the ancient Passover and creating a midrash or a charismatic teaching from the foundation of the historical narrative of the Passover story contained in the book of Exodus or Shemot, we say in Hebrew, Chapter 12.

Now, in the ancient Passover story, we have symbolism that is totally relevant for our present situation. Passover as it's recorded in Exodus 12 and the other portions of Scripture that give us the events surrounding it, they all speak to us not of just what happened to ancient Israel, but about what is happening on earth and in our lives now. For example, Israel, the ancient Jewish people, God's first covenant people that we read about in Exodus 12, Israel is a symbol of the church. All of God's people today, Jew and Gentile alike. Egypt, in the ancient Passover story, is a symbol of the world. God's people, Israel, were living in Egypt and they were being oppressed there. Likewise, you and I, as God's people today, are living in the world and we find ourselves oppressed.

Why are we oppressed? We're oppressed because powers of darkness are at work and they're being governed by Satan himself. Even so, ancient Israel in the land of Egypt was being oppressed by the powers of darkness that were being executed through Pharaoh, who is a symbol of Satan. Pharaoh had no mercy. Pharaoh only wanted to do one thing, and that was subject God's people to slavery. That's why Passover is called the Festival of freedom because they were delivered out of slavery into freedom. Likewise today, you and I that are being oppressed by the powers of darkness had been called into freedom. Yeshua said, "If the Son shall make you free," and I love this scripture, "you shall be free indeed". Do you ever think about a moment in your life, a memory that you might have where you just felt so free, you just felt so good, you somehow felt that you were connected to God in that moment? Many of us have brief memories of that type of experience.

I remember, for example, in my life, going back to my competition days as a wrestler, how I was an underdog in this one wrestling match and I beat this guy that was... Really he was ranked as a very high-level wrestler and I beat him. And I remember driving back to in the school bus, and then getting out of the bus and going to my car in the parking lot, got in my car, put my tape in the tape deck. And I was listening to a record called The Eagles back then-that was before I knew the Lord, just as part of the world-and a song came on one of these nights. And I don't know what happened, but it was like my spirit left my body. It was like I became spirit. And it wasn't like I was just hearing the music in my ears, it was like I was alive in the music. It was like I was spirit. It lasted only for a second. But somehow I knew that God was the one that touched me in that moment even though I didn't know Jesus.

And I never forgot it. And as a result of that feeling, I've always had a deep quest in me to be free, to feel like I did in that instant where the Lord touched me after I won that wrestling match, to feel like that all the time. And because I was able to feel it for a second, I've never lost the hope or the dream or the vision that I could experience that freedom all the time. So when Jesus says, "If the Son shall make you free, you shall be free indeed," I believe that. I believe there is a freedom for all of us, a bliss, an experience that God is bringing us into where we will be absolutely free in the Spirit, dancing in the Spirit totally full of indescribable joy and freedom. And Passover is the festival of freedom. Because in the Passover story, the Lord delivers His people out of Egypt where they're being oppressed and He brings them into freedom.

That's why when we celebrate Passover every year as Jewish people, the leader of the Seder, which is the special ceremony that we go through when we celebrate Passover in our homes, celebrating the story and having a great Seder meal, the leader of the Seder, will have a pillow and back of him so he's laying in his chair. And the reason that he has a pillow is to represent our freedom. We've been delivered by our God out of slavery. And now we lean back on our pillow because we're free. So, as we think about Passover, I want to ask you today, do you have a vision of freedom? Do you believe that you can really be free? Remember Jesus said, "If the Son shall make you free, you shall be free indeed". And Yeshua said, "You shall know the truth and the truth shall make you free".

I want you to know, beloved one, you're not always going to be feeling this way. God is going to bring you into freedom. There's something for you that's more than what you're experiencing right now. And by the way, for those of us that are struggling, perhaps with a spouse or someone else in our family, we have to be careful that we don't become overwhelmed because we're so connected to anybody in the earth in such a way that it is keeping us from being open to the Lord. Remember Abraham had to leave his father, he had to leave his mother, he had to leave his relatives to follow the Lord into a promised land, to a land of freedom. And so, you and I, today, we need to not become so overwhelmed by our family dynamics that it is putting us in a state of oppression so that we can no longer experience the Lord or no longer open to the Lord.

No, we have to give the Lord our families, our spouses, and our children. We have to surrender them to Him. Because Jesus said, "He that loves father, mother, brother, sister, child more than Me cannot be My disciple". So I want to call each and every one of us into freedom today. And that is done by, number one, realizing that there is more. Jesus promised it; I believe it. Many of you have memories of being touched by the Lord experience in that freedom. We're going to be brought into a freedom that will be all the time. And number two, we need to repent if we're allowing things in our life, to rob us of freedom, because we've made them god with a little g, rather than keeping Him as our God.

Passover is a story of freedom and deliverance. And this deliverance that's bringing us into freedom is not something that happens all at once. Because even after the Lord delivered Israel out of Egypt, drowning the Egyptians in the sea when the Egyptians tried to follow them, it was still years, 40 years, before Israel reached the promised land. And the Lord said to Israel when they were in the wilderness, "I'm not going to drive out all these nations before you at once. Because you wouldn't be able to occupy the land safely if I did it all at once. You wouldn't be ready for it". He said, "But I'm going to drive out your enemies from you little by little". So you and I need to realize that we may not be where we want to be today but we're much farther on than we were a year ago if we're truly pursuing the Lord. The Lord is driving out our enemies, just like He did Israel, little by little. And we need to continue to focus on the Lord in such a way that when we leave this world, we're going to be more sanctified than we ever were in our entire life.

In other words, sometimes people they seem to love Jesus at some point in their life, but somehow their love grows cold. We read about that in the book of Revelation. Jesus said to one of the churches, "I have all these things that I want to say to you that you're doing right, but I have this against you," Jesus said, "You've lost your first love". You and I need to maintain our first love and we need to continue to build on our freedom by being discipled in the Word of God, by applying God's Word to our life, by talking with Him, by including Him in everything, by submitting to Him. And I could go on and on. And I've talked about that many times. But we're moving deeper into freedom. And the last day of our life on this earth should be our greatest day of sanctification because we're continually going forward, being transformed from grace to grace, from glory to glory, and strength to strength.

The Bible says it was the Lamb that was with Israel in the wilderness. It was Christ that was in the rock. It was Christ that gave them water out of the rock. It was Jesus that was with them the entire way. He was sufficient for their every need. And likewise today, beloved, if I could communicate this message to you deep in your heart and deep in your kishkas, we say "in your gut," I pray that we can hear it, receive it, absorb it, and walk in it. Jesus, Yeshua, HaMashiach, Yeshua of Nazareth, the Messiah is enough for us to satisfy every real need that we have in life.

First of all, let's talk about our physical life. Jesus is enough to sustain us physically. We need to get back to believing in Yeshua being our healer. In the Hebrew Bible, He's referred to as Yahweh Ropheka or Yahweh Rapha, the Lord that heal us in the Torah. We need to believe in the Lord that can heal our bodies. I'm not ruling out using doctors. I think God uses doctors, just like he uses different people to do different things in society. Doctors have a role. But unfortunately, too oftentimes we're relying on doctors and not on the Lord for our healing. And as soon as we're sick, the first thing that we do is we think about the doctor rather than looking to the Lord to heal us. God wants us to rely on Him for every single need we have. Every single need we have.

If we're living our life seeking to submit to the Father, seeking to please Him and let everything else fall where it may, we're going to have peace and your Spirit will well up from within us as living water. Our heart and soul will be satisfied through the Lamb of God. Remember the ancient Israelites had to eat that lamb. So you and I today, we eat the lamb when we do God's will and we look at Him to be our satisfaction rather than these false lights of the world. And finally today, beloved, Yeshua is enough, the Lamb of God, because the Lamb of God is coming back. We read in the book of Revelation that the Lamb is on His throne. And His last words are, "Behold, I come quickly".