Rabbi Schneider - Do You Agree? 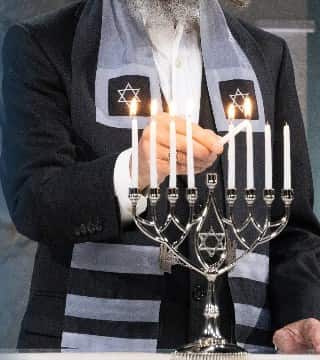 Shalom eleichem and Happy Hanukkah. I'm in Israel. What a great place to be talking about Hanukkah. Hanukkah is about how the ancient Maccabees, in the 160 BCE period, liberated Jerusalem and recaptured the temple and then dedicated it back to the God of Israel. And it's really about warfare, it's about spiritual warfare, how those Maccabees and the word Maccabee means hammer, that they were mighty warriors that drove out the Greco Assyrians and once again recaptured Jerusalem and then recapture the temple, liberating it. Dedicating it back to HaShem. But it took warfare.

And so I just want to pray right now, Father, that you would put within us a fire, that we would love you, even if it means the loss of our own physical life, that we would love you with such fire, with such focus father, with such passion that we would even be willing to give up our own life. The word says, Father, that they loved you, even unto death. Father, put that spirit within us that there'll be no shrinking back, no compromise. Father that we would be like those ancient Maccabees, but even more so, God, that we would defeat the powers of darkness in our own life and then be used of you to bring liberation to others as well. Father, we worship you this Hanukkah season, in the name of Yeshua, HaMashiach, who is the great menorah of God, that's continuing to shine in the planet.