Rabbi Schneider - Truth to Live By 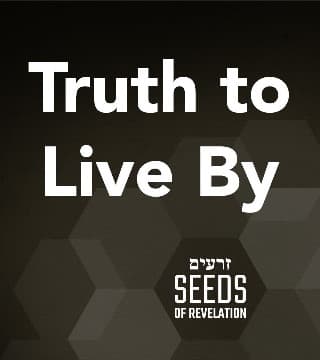 Shalom beloved one, God bless you. I wanna focus today on the Book of Luke, chapter 23 verse 34. A scripture that many of us are familiar with but I just wanna reemphasize it to help us remember this as we move through life. Yeshua's on the cross, being crucified for the sin of the world, there's people on the ground as He's high lifted up on the cross, they're mocking Him, laughing at Him, and Jesus as He's about to give His last breath before passing way, Yeshua says this out loud. Praying to the Father, He says "Father, forgive them, for they know not what they do".

So let's just pray that Father would help us to see beneath the offense to understand who these people that hurt us really are, and when we know who they really are and why they're doing what they're doing, that it's a result of their own brokenness and their own hurt and their own woundedness, we'll be able to have compassion for them, just as Yeshua had compassion for those that were crucifying Him when He said, "Father, forgive them, for they know not what they do".

So Father we ask you right now for a spirit of wisdom and revelation to be able to see through the surface, to penetrate the realms of darkness, to be able to see people for how they are standing before You that we can love them and have compassion on them, in Jesus' name.