Kenneth Copeland - Receive Your Covenant Promises by the Blood of Jesus 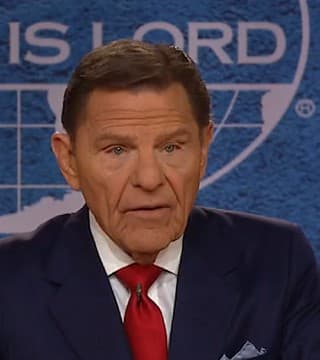 Let's go to the book of Hebrews. Praise God. Hebrews chapter six, oh I tell you what, I get over into the book of Hebrews, oh my, my, my, my. Thank you Lord Jesus. What, a rich, rich, rich book, Hebrews chapter six. Now we're talking about becoming fully, fully, completely, absolutely, fully persuaded, no wondering about it. I mean, you get to worry, you just know it like you know, two plus two is four. Glory to God, I mean this is just the way it is. From now, that's just it. Verse 12 "that you be not slothful but followers of them who through faith and patience inherit the promises".

Now we know what he's referring and talking about when he talks about promises, he's talking about covenant-sworn oath of God. "For when God made promise to Abraham, because he could swear by no greater, He swore by himself, saying, "Surely blessing I will bless the, multiplying I will multiply thee". And so, after he had patiently endured, he obtained the promise. For men verily swear by the greater, with an oath for confirmation is to them an end of all strife". An oath, a covenant promise of blood sworn oath is the end of the argument. Blood is involved here. The arguments over. We're western-minded people, covenants are just something neighborhoods make.

Well you can't have, your house can't have wood and shingles. No, we're talking about blood here. Blood agreements, blood of animals and the first, and the blood of God in the second. Verse 17 "Where in God, willing more abundantly to show under the heirs of promise, the immutability or the unchangeableness of his counsel, confirmed it by an oath". I have written in my, my Bible confirmed it by a blood sworn oath, "that by two immutable things, in which it was impossible for God to lie, we might have a strong consolation". One translation says a strong inner strength, fully persuaded, right? "Who have fled for refuge to lay hold upon the hope that is set before us", which hope we have as an anchor of the mind, the will and the emotions. That's where the questions occur, is in the mind, they must be renewed.

"Both sure and steadfast, which entereth into that within the veil; where the four runner for us is entered, even Jesus, made a high priest forever after the order of Melchizedek". Now, who was Melchizedek? No, it wasn't. It was not Jesus. Noah had three sons, you know their names? Shem, Ham and Japheth, Ham and Japheth, and God said the same thing to them that he said to Adam, he pronounced exactly the same blessing that he did to Adam in the garden. Ham and Japheth did exactly the same thing that Adam did. They just blew it off and went on their own way and really caused a lot of trouble. But Shem didn't, Shem according to Jewish records was, Melchizedek.

Now you have to remember, there's only something like 10 generations between Abraham and Adam. Oh, that stuff really starts getting good doesn't it? When you, when you, do some studying. Study the Chumash and you learn these things in the Chumash. Well anyway, so he, he blessed Abraham after the slaughter of the Kings. Now when you know, ole Chad came down there, he and two other Kings, I mean the largest military expeditionary force at the time, but he tied into a covenant man, didn't work. Abraham armed 318 men out of his own household, 318 men, and the blessing of the Lord taught them tactics, night tactics. Nobody had fought at night.

Remember the Army slogan; we own the night. Well that started a long time before the US army. It started with Abraham and his household. They owned the night, and I mean, they took care of business. They kicked the slats out of that bunch. I mean, they ripped into them. Listen to what Abraham said, I mean, there's dividing up the spoils and, and you know, there's one Knothead came up, said, uh, uh, yeah, you, you, you, you keep all the, you keep all the good goods, I'll take the people. Abraham said, no, I don't want any of it. Never let it be said, any man made Abraham rich. One translation said "no man made Abraham rich, but almighty God". El Shaddai made him rich. Amen. Are you listening to me? He's a covenant man.

Well Brother Copeland, you know how it is, win a few lose a few, not if you play the game right. Particularly when it's our bat and our ball and our father is the umpire. We gonna win this game. We don't play nine inning game. We play until we win, you understand that? Oh, glory be to Jesus, hallelujah. We're there. Now listen to me. Go with me now to the 15th chapter of Genesis. Oh Jesus. Now we've been reading from the 17th chapter of Genesis, but now go back to the 15th chapter and you can see now why Genesis 17 was so monumental and Abram immediately becoming Abraham. Why this, this, this whole arrangement was so marvelous and wonderful in his heart and in his mind.

"After these things, the word of the Lord came unto Abram in a vision saying, 'fear not Abram, I am by shield and exceeding great reward'". Abram said, Lord God, what wilt thou give me, seeing I go childless and the steward of my house is this Eliezer of Damascus? And Abram said, behold to me thou has given no seed and lo one born in my house is mine heir, and behold the word of the Lord came unto him saying, "this shall not be thine heir, but he that shall come forth out of thine own bounds or out of thine own body shall be thine heir". And he brought him forth abroad and said, "look now toward heaven and tell the stars if thou shall be able to number them, and he said unto him, so shall thy seed be".

Now you know what he's talking about when he went into Romans and said, thou so shall thy seed be. Now he has a base record. He has a, something with which to refer, to which to refer. He's got a base now. Stars. Oh. Wow. Whoa. Amen. Thank you Lord. He believed in the Lord. Now he did not believe in the Lord. Go back to Romans chapter four right where we were. It does not say, let the Bible interpret itself. Amen.

Now that means this is the ancient way of cutting the Hebrew covenant and it became the way of covenant in many, many peoples thereafter they divided, they cut it down the spine all the way, dropped the two halves, creating with the different animals end to end. Let me do it this way. Creating just room enough to walk in that blood. Now look at it again. A heifer three years old, a goat three years old, a ram three years old, three animals creating a blood walkway. Now, the ancient way of walking in that blood was to walk a figure eight which is today a figure eight on its side is the sign of infinity. This covenant is for ever, God said a thousand generations. Yeah, it's shouting time in the house of the Lord. He took uno him all these divided them in the midst, laid each piece one against the other another, but the birds divided he not and when the fowls came down on the carcasses, Abraham drove them away.

Now when you're believing God and you're standing and you're saying, I have a covenant with God and here comes the devil, ah, you don't think you're going to get anything. I'll tell you the fowler is there to run him out. Stand guard over that covenant. God's not going to run him off. The almighty God does not have authority in the earth to do anything about the devil. He's already done something about the devil. A man defeated him in hell itself and took his keys away from him and brought him to know it, Oh God, get the devil off. The apostle Paul tried that three different times and it didn't work. He said, my grace is sufficient. You get him off. I taught you the authority of the believer.

Now you get him off. And he did. Later he said, I've been delivered them all these things, so now let's continue with it. When the sun was coming down, a deep sleep fell upon Abram, and lo a hallow of great darkness fell upon him. And he said unto Abraham, no of surety that thy seed shall be a stranger in a land that is not theirs and shall serve them, and they shall afflict them 400 years and also that nation whom they shall serve will I judge. And afterward they shall come out with great substance. Thou shall go to thy fathers' in peace. Thou shall be buried in a good old age. Stop right there.

Now, Isaac was born. He said, he considered not his body now dead. Isaac was born at a hundred years old. He considered not his body now dead, neither the deadness of Sarah's womb, but only the covenant, not the contradiction. Now listen to this. The sun was going down. A deep sleep fell upon Abram, lo and hallow and darkness. Come down the 15th verse, thou shall go to thy father's in peace, thou shall be buried in a good old age at 175. But in the fourth generation, they should come hither again for the iniquity of the Amorites is not yet full and it came to pass when the sun went down, it was dark. Behold, look, a smoking furness and a burning lamp, a lamp of fire that passed between those pieces and the same day the Lord made a covenant with Abraham saying, unto thy seed, have I given this land from the river of Egypt under the great river, the river Euphrates.

I am totally, absolutely convinced because of what it says in Hebrews because of what it says in the book of Romans. He was completely, totally persuaded, completely persuaded, and this is when that persuasion began. Glory to God. I am totally convinced while he is watching a burning, does that remind you of a pillar of fire by day and a pillar of cloud or smoke? I mean fire at night and that pillar of cloud, the pillars smoke, it's called cloud in someplace it's called smoke in others. It's the glory. It's the glory, it's the glory. And I'm completely convinced he saw God's footprint in that blood.