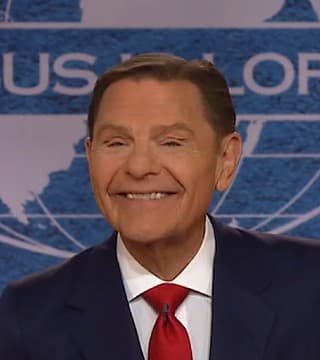 Let's go back to the 4th chapter of Romans where the apostle Paul is teaching concerning what happened in the 17th chapter of Genesis. And Romans chapter 4 verse 16, therefore it is of faith that it might be by grace to the end, or the purpose of it. The promise. Now we're at now the covenant promise. The promise might be sure to all the seed, not to that only which is the law, but to that also, which is of the faith of Abraham. Hold your place there and go to the third chapter of the book of Galatians cause we're coming back. Don't lose your place there in Romans four.

Galatians chapter 3 verse 8, the scripture foreseeing that the scripture in the beginning was the Word and the Word was God, right? The scripture foreseeing that God would justify the heathen through faith preached before the gospel unto Abraham saying, in these shall all nations be blessed, so then the which be of faith are blessed with faithful Abraham for as many as of the works of the law are under the curse. For it is written, cursed is everyone that continued with not in all things which are written in this book of the law to do them, but that no man is justified by the law on the side of God. It is evident for the just shall live by faith and the law is not of faith.

The man to do with them shall live in them. Christ has redeemed us from the curse of the law. Being made a curse for us, for it is written. Cursed is everyone that hangeth on a tree. So that the blessing of Abraham might come on the Gentiles through Jesus Christ, that we might receive the promise of the Spirit through faith. Brethren, I speak after the manner of men though it be a man's covenant. Yet it if it be confirmed, no man can this annul there unto. Now to Abraham and his seed, singular, to Abraham and his seed were the promises of promises made. He saith not and to seeds as of many, but as of one to thy seed which is Christ and this as say the covenant was confirm before of God in Christ. The law which was 430 years later cannot this annul.

Make the promise of no effect. Now it was a single seed. All the time God is speaking to Abram then Abraham, he is looking down through time and he's talking to Jesus. Amen. Now listen to this, verse 26, you are all the children of God by faith in Christ Jesus. For as many of you have been baptized into Christ, have put on Christ. There is neither Jew nor Greek, neither bond nor free. There is neither male or female. You are all one in Christ Jesus. And if you be in Christ, then are you Abraham's seed. Singular. Abraham's seed and heirs according to the promise.

If it wasn't so busy I'd run around this building. When this gets hold of you, I mean when it really gets hold of you. Some of you sitting there right now. What did he say, Myrtle? And about midnight tonight. What! You mean to tell me that Jesus Christ of Nazareth is my blood brother. Yes, yes. And there's no second born. We all have firstborn status. We are all, hey, we have exactly. We have exactly. You hear me exactly? The exact Spiritual DNA as Jesus who has exactly the same Spiritual DNA as God El Shaddai, the almighty God. Glory be to God forevermore. Think about it. Say this, "I am born again. Not of corruptible seed, but incorruptible. By the Word of God. Which lives and abides forever". Oh, son. Whoa. Thank you, Jesus. Thank you Lord Jesus. Oh my my my my. Glory to God. Thank you Lord. Oh, thank you Jesus. Praise you, Lord Jesus.

Now let's go back to the fourth chapter Romans, and we'll pick up right there where we were because now the words promise, covenant, all, all these words are beginning and take on very, very serious and very, very joy filled meanings. Thank you Lord. Lets beginning again, the 16th verse. Therefore it is of faith so that it might be by grace to the end or for this purpose. The promise might be sure to all the seed. Not to that only which is of the law, but there's that also, which is the faith of, of the faith of Abraham who's the father of us all.

As it is written, I have made thee a father of many nations. Before him... Little cross reference says like unto him, an excellent rendering is like God in his presence. Check out the different translations, especially the classic amplified, new living, NIV and so forth. It's exciting truly. Like God in his presence whom he believed, even God who quickeneth the dead, makes alive the dead, calleth those things which be not as though they were, who against hope, believed in hope that he might become the father of many nations according to that which was spoken, so shall thy seed. Be being not weak in faith. He considered not his own body now dead when he was about a hundred years old, neither yet the deadness of Sarah's womb. He staggered not at the promise of God through unbelief, but was strong in faith giving glory to God.

He's the God that will never leave you nor forsake you ever, ever, ever. Glory to God. He is Jehovah Nissi my canopy, my covering. He's always present and around me. Oh, I love this one. He is Jehovah, Lord of the Sabaoth, the Lord of hosts is his name. Well, let me, let me tell you what to do. Before we get into this any further, I need to deal with this over in the area of being fully persuaded. Let's go to the book of James in the fifth chapter. James chapter five, the Lord of the Sabaoth is the Lord of hosts, the angelic armies of God. Jesus is the Lord commander of the heavenly hosts. Are you listening?

All of the angelic forces of heaven, most of which are in the earth. Not all of them, but most of them are. Go ye now ye rich man weeping for your miseries that shall come upon you, your riches are corrupted. Your garments are moth eaten. Your gold and silver is cankered and the rust of them shall be a witness against you and shall eat your flesh as it were fire. You have heap treasure together for the last days. Behold the hire of the laborers who have reaped down your fields, which is of you kept back by fraud crieth. The money is crying out and the cries of them that have reaped are entered into the ears of the Lord of the Sabaoth.

Now ministering Spirits of God. Hallelujah. If you'll believe God and command your prosperity angels, they'll go get the stuff that's been stolen from you. And if you have nerve enough tonight, and I know you do, turn to the book of Malachi. Go to the book of Matthew and turn lift one book, just a little three chapter or four chapter book. Lord of hosts, Lord of the Sabaoth occurs in this little book 22 times. I particularly want you to look at the third chapter, verse 10. It'd be good for you to go in and read through that and just look at all that and keep in mind the angels are involved in it. My angel is involved in this. Bring ye all the tithes into the storehouse that there may be meat and mine house.

Prove me now here with saith the Lord Sabaoth, the Lord of hosts. If I will not open you the windows of heaven and pour you out blessing that there shall not be room enough to receive it and I will rebuke the devour for your sake. And he will not destroy the fruits of your ground. Neither shall your vine cast her fruit before your time in the field. Saith the Lord of host. I have an army of angels standing ready. If you'll just give me the opportunity, I'll bless you beyond anything you've ever... I am the God of the armies of heaven. Oh, glory be to Jesus.

Are we getting anywhere tonight? Hey, this is covenant talk. God is all these things. This is just the seven redemptive names. This is lists of names that we just call God or the Lord. And as I mentioned early, earlier though, the word God is relatively recent when it comes to revelation because it came out of German theology, Gott, and then, and then came on in to English speaking people and they just say God or Lord without receiving the benefit. God, Lord, and Christ.

One day, I don't know how that is, had this mentally, you know, you have to be careful, but you have to be careful about the way you grow up. Santa Claus and the Easter bunny turned out to be phony. And you need to make certain that Jesus didn't get put in that same category. Don't talk down to children. Talk to them like they were adults.

I remember John was about four, and uh, no, I'm making this a suggestion to you these are things that, that the Lord taught me over the years because this is not the way I was raised. Mom and dad would have if they'd listen, I was raised in a good home. It wasn't their fault I turned out like I did. It was their fault I turned around, my mama wouldn't let go. And you let me to tell you how she finally got me born again. Gloria and I had been married a short time. She had prayed for me straight up for over 13 years.

She did not know 1st Peter 5:6, casting all your care, your worries, concerns, and so forth. Over on him for he cares for you and he will exalt you in due time. She didn't know that scripture. I know she'd read it, and all, but it was not, and I heard of a tape that someone gave me and her Bible class even after she'd already gone home and be with the Lord. And I'd never heard her say this. Now, I knew she had done it, but I've never heard her say it and teaching or something. She just got fed up with praying for me. She didn't know it was working and I wasn't about to tell her.

She came in one morning just threw her Bible down on the kitchen table and said, that's it. I'm not praying for him anymore. If he goes to hell, it's your fault and not mine. Gloria got born again a week later, I got born again two weeks later. Now we're talking about becoming fully, fully, completely, absolutely fully persuaded. Hebrews chapter 6 verse 12, that you be not slothful but followers of them who through faith and patience inherit the promises. Now we know what he's referring and talking about when he talks about promises. He's talking about covenant sworn oath of God.