Kenneth Copeland - Stop Fear in Its Tracks to Be Healed 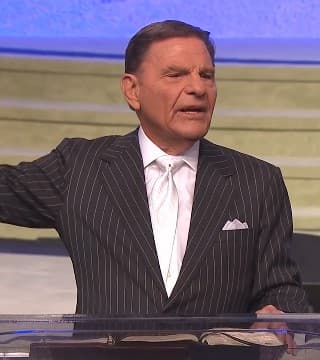 Open your Bibles with me. The book of Mark chapter five. Now here's Jairus, leader of the synagogue, "While he yet spake there came one from the ruler of the synagogue's house, certain which said, 'Your daughter is dead. Why trouble the of the master any further?' As soon as Jesus heard the word that was spoken, he said to the ruler of the synagogue, 'Be not afraid. Only believe'". He said, "stop the fear". Stop it right now. The way, the way Luke recorded this, he said, "Fear not believe only and she will be made whole".

That is a statement of spiritual fact. Stop the fear believe only get that fear out of there fear tolerated is faith contaminated and if you couldn't do something about it, he wouldn't have told him to stop it. You know exactly what gets rid of it. Love-filled faith will cast it out. Hallelujah. All right. "He suffered no man to follow him except Peter, James and John, the brother of James, and he come up to the house of the ruler of the synagogue. Seeth the tumult and them that wept and wailed greatly. And when he was come in, he sayeth unto them, 'Why make you this to do, and weep, the damsel is not dead, but sleeping'. They laughed him to scorn, but when he had put them all out, he takes the peg of the father and the mother of the damsel and them that were with him and entered in where the damsel was lying, took her by the hand and said unto her, 'Taletha Kuma'", which is being interpreted...

Now, notice that what knows what he did, he used his words as an instrument. "I say unto you". he could have just said, "Get up"! but he made and he, did this again and again. "'I say unto you, arise'. Straightway the damsel arose and walked". Now, let's go to Matthew chapter nine and look at the 24th verse and we'll take up right there where he was at that moment, "'Give place for the maid is not dead, but sleepeth.' They laughed him to scorn when the people were put forth, he went in, took her by the hand, and the maid arose".

Well, we know it took her by the hand, but we know also he said, "I say unto you, arise", and she arose. "And the fame hereof went abroad into all that land. When Jesus departed there", now where was he? He's in Jairus' home. He is in the home of the leader of the synagogue, which is connected to the synagogue. "He departed there, two blind men followed him crying and saying, 'Thou son of David have mercy on us'". Now, what did that mean? Thou son of David? That means they called him Messiah. Anytime you see that phrase, "Thou son of David", they're calling him Messiah. You remember those, the the woman with the vexed child that Jesus called a dog. You remember?

Now you talk about somebody that that Hey, if that had been today, she'd have sued him, Peter, John, James, all of them. She'd have had a class action suit against the whole bunch. And now wait a minute, what did she cry out? "Son of David"! Hey, remember something else she said when Jesus said the, you know, the, the, the... about the crumbs. Yeah, and the dogs. She said, "True Lord". She said, "True Lord". Now, this woman obviously had spent some time, she wasn't a Jew. She wasn't even a Samaritan. She's Syrophoenician, but yet she knew the truth and she called him, Son of David.

Now, Hey, this wasn't her first time to be thinking about Jesus. She said, true Lord. But even the dogs can get the crumbs. And it only took a crumb of healing to heal that girl. Healing is the children's bread. Isn't that good? Glory to God. Think about the 23rd Psalm, we're living in the 23rd Psalm. He's prepared a table before us in the presence and it's got healing bread on it. It's got prosperity bread on it. And it's in the presence of your enemy. Well, of course he's there. "Yeah, but Brother Copeland the devil is still there". Well, certainly. Yeah, he's still there. Go on and eat. Don't pay any attention to him. Why you pay so much attention to him? "Well, it just seems like it is camps on my doorstep".

Well run him off, quit paying so much attention to him. Sit down at the table and say, pass the bread. I'll have my healing today and pick up the plate. Lick it clean. Glory to God. I'm not leaving this table until I'm full of healing. Glory to God. I don't care what the devil thinks about, What is he any way but a defeated foe. So you get to talking about him like that and he don't like...that's really hard on him. Particularly, You start laughing, Haha, You still here? You don't belong at this table. Get! Amen. Be bold about it. Now, Oh, glory to God.

Notice when he departed there, from where? Huh? He walked out of Jairus' his house. "The son of David have mercy on us and when he was come into the house, the blind man came into him". He just went next door. He was at home. They followed him right into his house. Well, of course everybody knew which one was his house. I'm going to show you something in a minute that'll give you a new hairdo. A good one. He healed these two blind men right there in the living room. Must have been the "living" room. I thought y'all is quicker than that. It was in the living room. Amen. What's happening here? We're forming some new precious images about the Jesus that most of us have not known. We just, we heard about all these kinds of things and just skipped around through there, but we never went home with it.

Just went to the man's house. These blind men just followed him all the way in the house. Amen. You call him son of David, and you can get in the front door. Hallelujah. I said, hallelujah. Jesus. He touched their eyes saying, according to your faith, be it done unto you. Their eyes were open. Now go to the sixth chapter of John. Isn't the Bible fun? John chapter six let's read the first five verses. "After these things, Jesus went over the sea of Galilee", which is the sea of Tiberias, "and a great multitude followed him. They saw his miracles, which he did on them that were diseased. Jesus went up into a mountain and there he sat with his disciples. And the Passover feast of the Jews was nigh. And Jesus lifted up his eyes and saw a great company come to him. He, Sayeth unto Philip, when shall we buy bread? And then these may eat. And he said this to prove him and so forth and so on", and we know what happened out there that day.

And, uh, verse 13, "Therefore, they gathered them together, filled 12 baskets with the fragments of five barley loaves, which remained over and above unto them that had eaten". Now verse 14, "then those men, which they had, which when they had seen the miracle that Jesus did said, 'this is of a truth, that profit that should come into the world.' And when Jesus therefore perceived that they would come and take him by force to make him a King, he departed again into a mountain himself alone. And when the evening was now come", it's nighttime. They've had a long day. "His disciples went down unto the sea, entered into the ship, and went over the sea toward", where? Home. They're going home. They don't know where he is. He went somewhere else. But there he told them to go on, so they're going home and it's dark.

I'm just reading along. One day I'm just reading along, just reading along, and the Lord stopped me. He said, "Kenneth, I was tired. I had a long day and if you back up and read all that, it was, it was not just that day". He said, "I didn't want to spend the rest of the night while they rowed this thing all the way in. I wanted to sleep in my own bed and I wanted to get this thing outta here and get it home". Can you see it? Why else would that happen? It wasn't an outstanding miracle cause nobody's saw it. It's in the middle of the night. Jesus needed to be in his own bed. I know exactly how he felt. There's been times I just kept buying faster and faster and faster. Airplanes to just get me home quicker and it's still no where close to what that one did. Whoa. Let's get this thing home. Does that bless you?

Now, I'm gonna throw you a little side pitch here. Who did that? Who moved the boat? Who came to him in the wilderness? The angels. They just picked it thing, put it over there. Actually we're almost bound to think about it in terms of actually picking it up and so forth. It just, in a nano second dematerialized here in rematerialized over there. Amen. Now, you're going to have to do some studying about what I'm about to say to you. Angels are involved in everything God does. Everything. Everything he does. Does the physician have assistance? Sure. Yeah. Well, so does Jesus. This room is full of them right now. They're the ones that bring the new parts and install them. This is the reason you need to be watching your words cause angels, they don't, they, they listened to what you say so does the devil. You're going to license one or the other. Oh yeah. Satan is a legalist.

"Well, I didn't really mean it scared me to death". Well, he's a legalist. He'll whip you with a dictionary. Cause he'll accuse you of it. And if you said it, you don't have just cause you didn't mean it... There are spiritual laws that work whether you admit it or not. There are people that didn't mean to have another child, but they did. Amen. We have not paid enough attention to the ministering spirits. "All", say "All". All. "Are they not all sent forth to minister for them that are heirs of salvation". Say this. Say this:

For God, So loved the world that he gave his only begotten son. And who soever, Believeth on him should not perish, but have ever lasting life. And I was a part of that world. God loves me. He created angels for me. He went to the cross for me. He went to hell so I don't have to go. He did it all because he loves me. He wants me and I want him. He loves me with all of his heart, all of his soul, all of his mind, and all of his strength, and I love him with all my heart, all of my soul, all of my mind, and all of my strength. I love my neighbor as myself, fulfilling all the law, And I love the brethren even as he loves the brethren. I qualify to be made whole, spirit, spirit, soul, body. and all that has to do with my life my family, all of my finances. He loves me. And I love him. And right now. I receive my healing.