Kenneth Copeland - The Blessings Gives You Authority Over The Curse 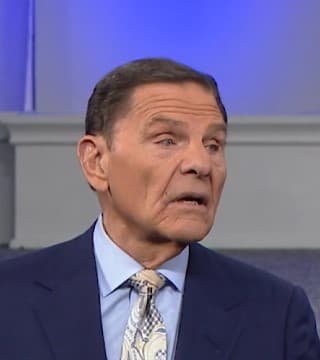 Now, we've covered a lot of territory this week. Let's read our golden text once again from Galatians 3, and Christ, the anointed one, has redeemed us from the curse of the law. So now we see the curse. Being made a curse for us, for it is written, cursed is everyone who hangeth on that tree. So that the blessing, now there's the blessing, of Abraham might come on the Gentiles through Jesus Christ, that we might receive the promise or receive what the spirit promised and receive it through faith.

Now, we talked about the curse threefold. Spiritual death. This has been an area that's been, well, anything, anything spiritual. Since spiritual things have to be believed before they're seen, and the natural human way, ever since the curse has come on human beings, is to be controlled by the natural physical life. Most people, the majority of the earth, are body, mind, and don't know anything about being a spirit or don't even know what a spirit is other than fantasy or ghosts. Then some of them get over there and play with that. Then there are some that are mind, body, and spirit. Then there are those that are, according to the Bible in 1 Thessalonians 5:23, that you may be made whole, spirit and soul and body. That's the proper order. The spirit man, the you. The Apostle Paul said, "I keep my body under". I do it.

Now, in the truest sense of the Word, you and I, you are a spirit. You have a soul and you live. You live in this physical body. We talked about this some, well we touched on it the day before yesterday, but we talked about it some yesterday. I want to spend some more time in this. If I could step out of my body. My inner man, me. You can't see me, I can't see you. I see your physical body. Not a whole lot of that. Why? Because you've got clothes on your body which is clothes for your spirit.

Now, this spirit, let's think about this. If I could step out of my physical body, you could see me standing here and you could see my body standing here, you would see a body that's 82 years old, and it shows 82 years of wear and tear. I don't look like I used to. I'm a whole lot better looking than I used to be, particularly when I'm nearly 100 pounds more than what I weigh now. I want to tell you something, that fat man ain't never coming back, I can tell you that right now. Anyway, you would see this body. Then you would see me at about 28 years old, because you are renewed day by day. Your body is dying. Day by day.

Now, there's a whole lot that we can do about that. Amen. The scripture's just full of things that we can do about that. But the thing I wanted to point out, if that were to happen, if I were to step out of my physical body, my physical body would just fall in the floor because the life force, the spiritual forces that keep this body alive, are coming out of me. Coming out of my spirit being. Now, the same basic thing is happening to the person who has not been born again or born from above or born again by the Word of God, which is incorruptible seed. Has not become a new creature. Old things have passed away.

Now we know what all passed away. Before anybody, the spirit being had no righteousness in it, no faith in it. There's natural healing faith, but none of the faith of God. Let's put it this way: The spiritual... You remember in the fourth chapter of the book of Proverbs it said, "Protect your heart with all diligence, for out of it flow the forces of life, flow the issues of life"? That life force that comes out of the spirit being. Inside there, inside that spirit, the you, the human being that lives in a body, look at it like a fountain. In the unborn again, the old creature... let's do it like this. Thank you, Lord. Back before you were born again, before you became a new creature, the fountain in there was producing fear, not faith. I'm talking about the spiritual force of faith. Not natural human faith, but the spiritual force of faith. The faith of God wasn't in there. It's producing fear.

So all of the spiritual forces inside that spirit being were ungodly. Now, a person could be very, very religious and a good person but never been changed. So what happens when you do that? That's not spiritual development. That's soul development. That's mental development. Mind, will, emotional development or control. There are people that control fear and do a good job of it. There was one guy, I thought it was amazing. He was telling this aviation writer how he got into the airline business. He was retiring from the airlines. Lots and lots of time. Thousands and thousands of hours flying, and he's retiring. And they asked him how he got started flying.

Now, think about this. Think about somebody that has a really dangerous job. Think about a rodeo cowboy. A good one, champion bull rider. I mean, here's a guy that gets on the back of a very, very angry animal. I don't want to get anywhere close to the thing, much less ride him. I'm not gonna do it. But he does this for a living, and it doesn't frighten him. Why? He's managed the fear. But fear hasn't gone away. He goes and gets in his truck. He's headed to the next rodeo, just worried sick the whole time about his finances, about his family, and he's scared about what's happening, and he's just managed fear. He hasn't done a thing in the world to get rid of it. He doesn't even know you can get rid of it.

And some of you are sitting there saying, "You mean you can get rid of it"? You can if you believe the Bible. 'Cause, see, that fear, that's a spiritual thing. That's a spiritual force. Perfected love casts it out. It doesn't manage it. It casts it out. Where you can be standing there and your knees popping, and you know, and fear is just doing its best to just wreck your whole life, here in particular, whatever is at hand at the time, and your mind is just racing. Your heart's about to beat out of your chest, but you just say, "I just refuse to fear in the name of the Lord Jesus Christ of Nazareth. You spirit of fear, take your hands off of me. I'm a born again new creature. Thank God I have the love of God in me. My God loves me and he's not gonna allow this to go any further, so I don't allow it to go any further. You shut up and get out".

And you watch and see what happens. Why? Any fear that any born again believer is experiencing is not coming from the inside. Would you agree with that, Spencer? I mean, that fear's not coming from the inside. It's coming from the outside. Now, if there's fear in there, you fed it in there by talking fear, but you get it down in your soul. You don't get it in your spirit, come on. What's the matter here? By talking, you work up a lot of fear, and particularly if you don't ever use your faith on purpose. You practiced fear until you have what? Perfected it. And it's just there.

The devil's just hanging around all the time. All the time. You've heard me tell this before. When they diagnosed little Lindsey when she was 11 years old with meningitis and the disease, the specialist told us, just to let Kellie know that Lindsey wasn't going to live 'til daylight. And Kellie told me, she said, "Daddy, I'm telling you that thing was so dark". She said, "It just came down over me". She said, "I've never felt so helpless in all of my life". Right there, she could have yielded to that. Huh? She could have yielded it to it, and had she not known faith and how it works, would have yielded it to it, Lindsey would have died. Gone straight to heaven and would be there today waiting on us, instead of being married to a fine young medical doctor that I enjoyed very much marrying the two of them, thank you very much. Amen.

But what happened? When Kellie got that news, she didn't put up with it. She didn't start crying, "Oh, why, God? Why did this come on me"? Hey, we're past that. Forget about that. New business here. Don't allow that spirit of fear to deal with it. That's not who you are. That's who you were back before you got born again. She walked over to her older sister, Terri. Terri said she had fire in her eyes. She said, "I refuse to fear". The minute she said it, she said, "Daddy, that thing just..." She said, "It just flew away like a scared bird," and she said, "It felt so dark and so heavy and just so mean and deadly," but the moment she said with her mouth, "I refuse to fear," what did she do when she said that?

She did James 4:7. She submitted herself to God and she resisted the Devil and he fled. And Lindsey was healed before daylight instead of being dead before daylight. Come on, somebody. Come on. I'll tell you, the blessing went into operation and put that curse right where it belonged, underneath her feet. Glory be to God. I said glory be to God. Hallelujah. Now, keep that. Renew your mind to that separation of spirit and soul and body. Renew your mind to that and begin to think of yourself not as a body and not as a mind, but you are a new creature with a soul in a body. Hallelujah. And you have immense authority. It is mind boggling the kind of authority that you and I have because of the name of Jesus, which is part of the promise. Oh, glory, glory, glory, glory. Come on, come on, come on, come on, come on. Thank you, Lord Jesus.