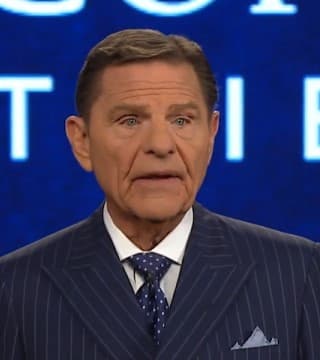 Tonight, let's open our Bibles, first of all to Romans chapter four and we'll start reading with the 17th verse. "As it is written, I have made thee a father of many nations before him whom he believed even God who quickeneth the dead and calleth those things which be not as though they were, who against hope believed in hope that he might become the father of many nations according to that which was spoken".

Make a note about that if you haven't already, underlined it, do so. "According to that which was spoken, so shall thy seed be. Being not weak in faith, he considered not his own body now dead when he was about 100 years old, neither yet the deadness of Sarah's womb. He staggered not at the promise of God through unbelief, but was strong in faith giving glory to God and being fully persuaded that what he had promised, he was able also to perform it".

Now, let's go to Genesis please. Chapter 17. Look at the fourth verse. "As for me," well, let's read down from the first verse, I really like this. "When Abram was 90 years old and nine, the Lord appeared to Abram and said unto him, I am the almighty God," what a wake up that would be. "I am the almighty God. Walk before me, be thou perfect and I will make my covenant between me and thee and will multiply thee exceedingly. Abram fell on his face and God talked with him saying".

Now I want you to notice this is a very, very important, it's a very telling statement. It shows us something about God. Was Abram seeking God trying to get a covenant with him? No. I don't know whether he knew he needed one. God was seeking a man with which to make covenant. God is always seeking people, seeking somebody that'll covenant with him, seeking somebody that'll take him at his Word, hallelujah. He's a covenant making God. If he wasn't a covenant making God, we'd all go to hell. We wouldn't have a chance without his covenance. Amen. I really like that. In fact, I just, this really does. "As for me, look, my covenant is with thee and thou shalt be a father of many nations. Neither shall thy name anymore be called Abram, but thy name shall be Abraham for a father of many nations have I made thee".

The literal meaning of Abram is exalted father. The meaning of Abraham is father of a multitude. So, God said, I have made you, I have made you the father of many nations. Praise God. Now, I want to talk to you tonight about faith that gives glory to God. Let's go back over there once more to the fourth chapter of Romans, and let's look at this again. These two places of scripture are just some of my very favorites. Let's back up now to the 16th verse. "Therefore it is of faith," say it is of faith. "That it might be by grace to the end, the promise might be sure to all the seed, not to that only which is of the law, but that that also which is of the faith of Abraham who is the father of us all".

Well, I would say he's the father of many nations, wouldn't you? Amen. "As it is written, I have made thee a father of many nations before him or like him whom he believed even God who quickeneth the dead and calleth those things which be not as though they were who against hope believed in hope that he might become the father of many nations according to that which was spoken. So shall thy seed be". "Being not weak in faith, he considered not his own body now dead when he was about a 100 years old, neither yet," or he didn't consider either the deadness of Sarah's womb and it wasn't dead because she's over 90 as she never had been able to have children in her whole life.

Now think about this. The faith that gives glory to God considers not the circumstance or the symptoms. You won't find anywhere in the Bible where it said, and I am going, I am going to put your sickness and diseases on Jesus and he's going to bear them away. You won't find that. You will find where it says, I have put the sickness and disease on him. He bore your sins in his own body on the tree. I have already done that. I have already put that in motion. That's not a promise to heal. Ain't no promise in that. That's a Bible fact. That has already been done. I'm coming down here. I need to get done here where I can talk to you. Amen. Thank you Lord.

Jesus said, I hadn't found this great a faith in Israel. Israel should have had that kind of faith that he wasn't surrounded with it. That included the 12 that were standing there behind him. And this guy's a Roman. Where did he get that? Well, I could go into some things that I don't want to take time to do right now. This Roman was part of a good synagogue. He built that synagogue. Jairus was leader of that synagogue as a good synagogue. Amen. It wasn't hostile to Jesus. This all happened right there in Jesus' hometown of Capernaum. That was the synagogue in Capernaum where Jairus was leader of the synagogue and this Jairus is the same man that fell at Jesus' feet and besought him greatly that my little daughter lieth sick to death. Come I pray thee, lay your hands on her and she will live.

And if you track it, hey, you want to have some fun? Get your concordance and look up Capernaum, Jesus' hometown. And then look up all the scriptures about Capernaum and where Jesus was in and out of Capernaum and every time it says they went to Capernaum, you write out there, home. He went home. Oh, that's fun. You find some things that are startling, stunning. Jairus' house was right there. Right there, very close proximity could have been next door to Jesus' house and headquarters. Oh yeah. And if you track it, look at it, and in each of the gospels where it talks about raising that girl up, he left Jairus' house and went to the house. And the two blind men followed him home. Followed him right into his own house. Ain't that good? Amen.

And he ministered to them in his house. He ministered to Jairus' daughter in Jairus' house and went immediately from there to his house. That's funny. That's delicious. Hallelujah. Now, that centurion was part of that synagogue. Now, I don't know, the scripture doesn't tell us how many times Jesus preached in that synagogue, but that's hometown. I don't know, but I know several sermons that he preached next door in his house. Yeah. He preached about which is easier to say, thy sins be forgiven thee, arise, take up your bed and walk. He preached that right there in the house, in his house. That place was so full, it was so full of people from, read it, it says they came in there from everywhere. He wasn't in one of their synagogues. They came to his home to hear him. That's a different crowd.

Anyway, I wanted you to see the honor and the glory that was given to God by honoring his Word, by acting on that Word. You just say it. You don't have to come to my house. I understand I'm a gentile. You don't have any business coming to my house, you don't need to do that. Just say the Word, you'll be all right. That's all you got to do. Faith in the Word of God requiring no other evidence. I'm going to say it again. Faith, you might put it like this, faith and the power and absolute authority of the Word of God requiring no other evidence. That's enough for me. You said it, that's enough. That did it. I receive it, and from this point on, that's the answer.

Now, let's look at this again. Being not weak in faith, he considered not his own body. So now this tells us what weak faith is. Weak faith considers, gives the same reverence or even more so to the symptoms or the situation as you do what God's Word says about it. Now, in the middle of that is where you run into the phrase, yeah, but the doctor said. Yeah, but you just don't understand. Like one fellow, this is a long time ago, Jerry will probably remember this. We were in this prayer line and I'm going along laying hands on different ones and I started to lay hands on this man and the Lord stopped me. He said, ask him if he's healed.

Well, now, you know, that's kind of a funny thing to ask a guy that's in the prayer line. He's in the healing line and you ask him if he's healed. I said, "Are you healed"? "No". He said, "I got this thing right here," and he started describing whatever it was he had there on his side. And I heard the Lord say that. Just as plain. Ask him again, "Are you healed"? He said, "No". I said, "The Word of God says by his stripes you were healed". "Yeah, I know it says that". "Well, are you healed"? "No, I tell you, I got this thing right here".

Now see, this thing on his side had more authority than first Peter 2:24 and what Jesus did at Calvary. And then thank God the Lord gave me what to say. I said, "If I agree with you, you're going to keep that thing you've got on your side. If you will agree with the Bible, then you have God's Word that you're healed". Man, you could see the light come on. "Yeah," he said, "Praise God, put your hand on me, I'll be healed". I laid hands on him and the power of God just knocked him sideways brother, and he came up healed.

You see where the struggle was? The symptoms, the situation, the problems was not glorifying God at all, but by giving this problem that he had, I don't remember now what it was, I just remember it was on his side right there, boy, I'm telling you, that had his attention, that had authority in his life. Well now who's the author of this thing that's hurting him? Who's the author of this cancer or whatever this thing was on him? The devil. He's actually giving honor and glory to the lies of the devil. That thing on him is a lie against the truth. Amen. There is no truth in a cancer. Now, if I take the truth of God, put it in my heart, put it in my mouth, believe it with my heart and say it with my mouth and bring corresponding action on the scene, the truth would get rid of this fact.