Kenneth Copeland - God Made a Promise to Uphold His Covenant 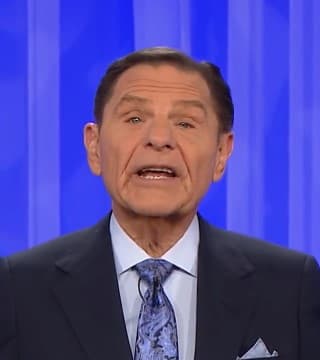 Hello everybody I'm Kenneth Copeland, and this is the Believer's Voice of Victory broadcast. Thank God for Jesus. I said thank God for Jesus. Yes. Aren't you glad Jesus is Lord and not some fool? Oh yeah, amen, glory to God. I'm really excited about what we're going to be doing all this week. Let's open our Bibles again this evening, to our golden text for this three week series. Which is in Galatians 3:13-14. "Christ hath redeemed us from the curse of the law. Being made a curse for us. For it is written, cursed is everyone that hangeth on a tree. So that the blessing of Abraham might come on the Gentiles through Jesus Christ. That we might receive the promise of the Spirit. That we might receive what the Spirit has promised Abraham through faith".

And we've spent a lot of good time in there, praise God, and some very very exciting things. Then we talked extensively about the blessing. Beginning with the blessing of Adam. And I made mention several times, and I want to make sure you get this. Once God has introduced something into the Earth, the devil can't get it out. Don't ever forget that. Now he does his best to mess it up, he'll lie about it, you know. He does it best to act like it's gone, but he can't do it. No, no. Amen. And the blessing we know what happened to it. Adam was given... Well you know the scripture that says, "And God created the heavens and the Earth and gave it to men, mankind". Gave complete and total authority over all the works of his hands into the hands of the human race.

Now, we know what Adam did with it. And he walked away from it and committed high treason, spiritual high treason before God. Now he had the authority to do it, but he did not have the moral right to do it. Amen. So now how long is the devil going to be the god of this world? Now he's not our God, but he's the god of this world. How long until Adam's lease is finished. When that's finished, he's finished, glory to God. Now that's another wonderful study but we're not going to go into that tonight. Now then, tonight we're going to talk about the promise. Oh, glory be to God.

Now let's go to the 22nd chapter of Genesis. Genesis 22. We'll begin with verse 1. "And it came to pass after these things that God did tempt, or prove, or tested Abraham. And said unto him, 'Abraham.' And he said, 'Behold, here I am.'" I like that. He said, "Abraham"? And he said, "Yes sir I'm here". "And he said, 'Take now thy son, thine only son Isaac.'" Underline that if you would please. "Your only son, whom thou lovest. Get thee in the land of Moriah. Offer him there for a burnt offering upon one of the mountains which I will tell of thee.' And Abraham rose up early in the morning, saddled his donkey and took two of his young men with him".

You notice he didn't argue? He didn't talk back to God. "What do you want me to do"? No, no, that's what they do in the movies. That didn't happen. And we'll see, prove it. "Took two of his young men with him and Isaac his son, clay the wood for the burnt offering. Rose up and went into the place of which God had told him. Then on the third day Abraham lifted up his eyes on saw the place afar off. Abraham said unto his young men". Now look what he said, now. Remember, Abraham is a faith man. He already has, he already has an absolute promise of God, and fact from God about the future of this young man. "He said to the young men, 'Abide ye here with the donkey, and I and the lad will go yonder and worship, and come again to you.'"

We're going to be back. "Abraham took the wood of the brunt offering and laid it upon Isaac his son. And he took the fire in his hand and a knife, and they went both of them together. Isaac spoke to Abraham his father and said, 'My father?' He said, 'Here am I my son.' He said, 'Behold the fire and the wood. But where is the lamb for the burnt offering?'" "Abraham said, 'My son, God will provide himself a lamb for the burnt offering.' So they went both of them together. They came to the place which God had told him of. And Abraham built an altar there and laid the wood in order, bound Isaac his son, and laid him on the altar upon the wood".

Now that says a whole lot for his son. He didn't argue with his dad. He trusted him. He trusted him. And through him he trusted God. That's some good raising had gone on there, right? So, now follow this. "Abraham stretched forth his hand, took the knife to slay his son. And the angel of the Lord called unto him out of heaven. And said, 'Abraham, Abraham.' And he said, 'Here am I.' And he said, 'Lay not thine hand upon the lad, neither do thou anything to him. For now I know that thou fearest God, seeing that thou has not withheld thy son, thy only son from me.' Abraham lifted up his eyes and looked and behold, behind him a ram caught in a thicket by his horns. And Abraham went and took the ram, offered him up for a burnt offering in the stead of his son. And Abraham called the name of that place, Jehovah Jireh. As it is said to this day in the mount oft Lord it shall seen".

"And the angel of the Lord called unto Abraham out of heaven the second time and said. 'By myself have I sworn, saith the Lord. For because thou has done this thing and has not withheld thy son, thine only son that in blessing I will bless thee, in multiplying I will multiply thy seed as the stars of the heaven and as the land which is upon the seashore. And thy seed shall possess the gate of his enemies. In thy see shall all the nations of Earth be blessed because thou hast obeyed my voice.'"

I want you to notice what he said. I swear to you by myself. I can't swear, there's not anybody bigger than me. So I swear by myself that I keep the Words of this covenant between you and me. I swear it to you. If I lie to you one time, if I fail to keep this covenant, I will destroy myself. Wow. Somebody say amen. Praise God. Now quickly, to the 11th chapter of the book of Hebrews. Oh praise God. Hebrews 11, and I want you to notice the 17-19 verses. "By faith Abraham when he was tried or proved, offered up Isaac and he that received the promises offered up his only begotten son of whom it was said, 'That in Isaac shall thy seed be caught.'" Look at the 19th verse. "Accounting that God was able to raise him up even from the dead, from whence also he received him in a figure". He'd already seen it, I think he was a little bit disappointed. He fully intended to see God, he intended to plunge that knife into that boy. He intended to burn his as a sacrifice, and he intended to see God raise him up out of those ashes. And God said, "I swear to you by myself, I am covenant faithful God".

Now, that covenant sacrifice in the blood of that ram. That was the holy sacrifice. That ram took the place of Isaac. And this was an amazing sacrifice. That ram took the place of Isaac. Why? Why would God do such a thing as that? Why would he bind himself? What is the eternal motive behind this? God knew that the day is coming when his own Son would pray, "If there's any way, take this cup from me". And God, if his Son, covenant son Abraham could offer his only begotten son, then by covenant he couldn't withhold his. That's the reason that holy moment that the sacrifice of that ram. That ram's blood was flowing. That was such a precious moment.

Can you see that? But listen to what God said. I want you to... "I swear to you". This is the Almighty God himself. I swear to you. I can swear by no greater so I swear by myself. I swear I will keep this covenant. Whoa, glory to God. Oh glory to God. I said oh glory to God. Glory be to Jesus. Thank you Lord Jesus. All right. Hebrews 6:13. "For when God made promise to Abraham because he could swear by no greater, he swore by himself. Saying, 'Surely.'" See the word surely? This is an absolute surety. "'Surely, blessing I will bless thee, multiplying I will multiply thee.' And so after he had patiently endured and obtained the promise, for men verily swear by the greater". And an oath, a blood sworn oath, you see what God did? He swore in the blood of that ram. You see it?

He swore in the blood of that ram. And he said, "For men verily swear by the greater and an oath for confirmation is to them an end of all strife," or argument. Once there is a covenant confirming. And we're talking about a blood oath here, you understand. Then the argument about the thing is over. I mean God settled that forever. He can't break this thing. I don't care if it is in the blood of an animal. He swore. I'm very eagerly doing my best to get this over to you, the gravity of it. Listen this is God. He doesn't just go around swearing stuff to people. What's he doing anyway? The very moment that Adam did what he did, God set out to get him back. He set out to get Jesus into this Earth, and he... Whoa glory be to God, hallelujah. Amen?

That's the reason he, that's the reason he went to such length to get it across to those people. That I have made a way for you to get out from under this curse. Then his lamb, his lamb destroyed it. Glory to God. Oh, that'll cause you to dance around. Thank you Lord Jesus. Oh glory be to God. "While men verily swear by the greater, and an oath for confirmation is to them an end of all strife. Wherein". Now, we'll get this in right now and then tomorrow we'll take it up here. God willing more abundantly to show unto the heirs of promise, that's me, that's you. The heirs of promise the immutability, the unchangeableness of his counsel, confirming it with an oath. Oh come on, give the Lord praise. Give the Lord praise. I said give the Lord praise, thanksgiving. Hallelujah.