Joyce Meyer - Why Should I Bless My Enemies? 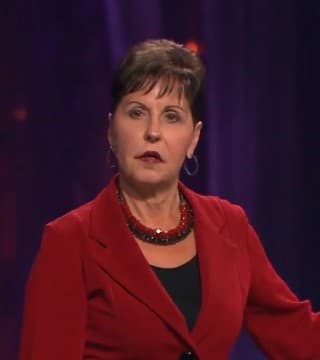 Be a person that is determined to do what God asks you to do. And always understand that God will never ask you to do something if He doesn't give you the power and the ability to do it. Where God guides, He always provides. His grace is always sufficient. And so, "Do good," means, "To the best of my ability, get up every day and do what I believe that would please God." We need to live to please God.

And then, number two, I believe that, "Do good," means just what it says: "Do as much good as you can everywhere that you can to everybody that you can as long as you possibly can." Because there's power in just being good to people.

Romans 12:21 says: "We overcome evil with good." And I personally think that that's one of the most hidden secrets of the kingdom of God. Any evil that's been done to you, the way to overcome it is to go out and do somethin' good for somebody else. And it especially gets powerful if you do somethin' good for the person who mistreated you. Now, that's a whole 'nother level.

In john 11, verses 32 through 41, when Jesus was gonna raise Lazarus from the dead, such interesting verses. I mean, first of all, it says that He waited long enough for Lazarus to die. And then He waited till he was stinkin'. And then He shows up. Wow, "You can't do nothin' now. He's dead and he stinks."

And not only that, He's taken a very bold step and given man a free will. God wants us to use our free will to choose His will. That's the high calling on our life. He didn't want robots. He didn't want puppets, so He gave us free will. And if somebody wants to go to hell, God will protect their right to do that.

I mean, it's true. And I'm sure some of you are finding out, if somebody just does not want to love God, you are not gonna make them love God. It's a decision that they get to make, but they also get to be responsible for the decisions that they make. So, this thing about free will, it's really exciting on one end, but, boy, there's such a responsibility to it because if I have free will and I can make my own choices, then I really can't blame God or anybody else for the messes.

And, boy, do we have a big problem with that, blame, blame, blame, blame, blame. And now, there is this area where, when wicked people are making wrong choices, if they happen to be in some kind of authority over you, then sometimes you get in the backlash of their decisions and you get hurt.

And we don't always understand why God doesn't do something about that. But what God wants us to do is to trust Him, and then, as soon as we can make our own choices, start making choices according to His Word. And then, it doesn't take very long at all, and you begin to overturn all the effects of any of the bad things that happened.

But what satan wants is for evil people to do evil things, and then even good people or well-meaning people get hurt by that, and then he wants them to get bitter and spend their life full of hatred, wanting to get revenge. But we're smarter than that, aren't we?

The dumbest thing that we can do is try to deal with our own enemies. And I can say that now after 40 years of teaching the word, but I wasted a lot of my time bein' mad at people who hurt me, and it just was really a total waste of time.