Joyce Meyer - Why Doesn't God Give Me What I Want? 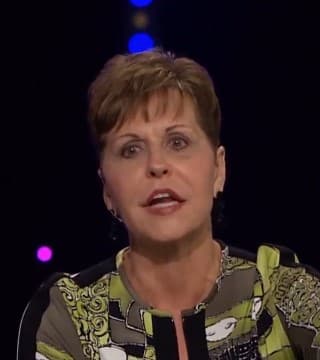 So, that means in every situation that I'm in, the best way that I can get relief from worry, or anxiety, or fear, or tension, or stress, or anything else, is just to believe. I had to learn to do that even when I'm preaching. Sometimes I'd be preaching and somebody would be fidgeting around, lookin' at their watch, yawnin'.

Two or three people would get up and leave and all of a sudden I'd start thinking, oh, this message must be terrible. They don't like my preaching. And I mean, I would just start going down the drain. And God began to show me, if you don't maintain your confidence when you're in that pulpit, you're gonna give the meeting to the devil. You have to be confident and you can't wait to feel confident, you have to be confident.

"For in the gospel a righteousness which God ascribes is revealed, both springing from faith and leading to faith disclosed through the way of faith that arouses to more faith." I love that. So, in the Bible, there's a righteousness, a right standing with God that's revealed.

Now, if you don't know that right standing with God, you're not gonna able to have this kind of faith because you're gonna think that everything in your life is dependent on you, but it's not. It's all dependent on the grace of God coming to you and you receive that grace through faith.

If you've sinned, you don't have do something to pay back now for your sin. What you need to do is say, "I believe that God will forgive me if I ask Him. I receive that forgiveness. There's no condemnation because the Bible says there's no condemnation. God still loves me. I'm still right with God." And that enables you to just have faith that everything's gonna work out right in your life.

I don't have to believe for something. I need to believe in Somebody. There's a difference. We've always got this thing that we're believing for. Well, you know what? There's a faith that's so much greater than believing for something and it's a faith that believers in someone and especially when you don't get the thing that you're expecting to get.

Come on, we need to understand that God is smarter than we are and he knows better than we do what we need. And thank God that He won't give us what we want but He'll make us wait until we're smart enough to receive what He says is gonna be the best for us.