Joyce Meyer - Why Can't I Just Fit In? 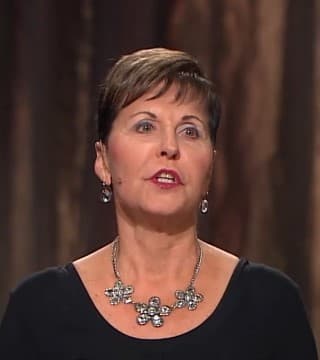 Father, thank You for this conference, and for allowing us to serve Your people. And I pray that the teaching this morning would really help prepare people for whatever is ahead in their future. I pray, Lord, that everybody would be attentive to the Word, and that they would receive something that's going to make a big difference in their lives. Help me, be with my mouth as I speak, and bring things out of me that I don't even know that people need to hear, in Jesus' name, amen.

Well, today, I want to talk to you about having the courage to be different, amen. You know, there's probably relatively few people that have the courage to be completely and fully themselves throughout their lifetime. But I believe that, as children of God, we can learn that as long as we have our trust in Him.

Do you know anything at all about living a phony life because you're trying to impress everybody else around you? That's real torment, isn't it? To not be able to be free to be who you are. And you know, the truth is we are all different.

God made us different on purpose, and so it's really foolish to spend your life trying to be like somebody else. Now, other people can be an example to us, but they should never become our standard. Our standard is Jesus. And if He didn't want us to be different, we wouldn't all have something as simple as different fingerprints.

I mean, He's gone to pretty great extreme to say, "I didn't create you to be just like somebody else." And it was hard for me to fully step into and embrace this role that God has called me to because I got a lot of rejection when i first stepped out to do this.

You know, a woman ministering is much more acceptable today than it was 40 years ago when I started. And I believe that sometimes, God uses people, and I'm sure He wants to use you in a similar way in whatever area you're in, to kind of clear the path for other people that are going to come behind them. And I paid a price to do what I'm doing.

Honestly, I don't believe that you can ever do anything that's of very much value if you're not willing to pay a price to do it. And part of the price that we pay is being misunderstood by other people. We always expect people to understand, but they don't. And we have to finally understand that if God has spoken something to your heart, you get it.

But if He hasn't spoken that to somebody else about you, they have no ability to understand. And if you're trying to deal as a believer with an unbeliever, then they certainly don't get it. They don't understand anything about our walk with God. But I love Hebrews 4 that says that we have a High Priest who understands.

See, Jesus understands you. So, in your own little brand of uniqueness... see, I used to think I was weird, but then I finally realized, "I'm not weird, I'm unique." And you are unique, and God wants you to be free to be fully and completely yourself. You can survive rejection if you have to. You can survive the rejection of people, but you cannot survive losing your relationship with God by being a coward and giving in to what the world is making demands on us for.

You know, when I first stepped out to follow the call of God on my life, I mean, I went through some very, very, very hard times. I got asked to leave my church, lost most of my friends, and it was a lonely and a hard time for me. And to stand here and say that I had no fear would not be true because, back then, I didn't understand how to deal with fear like I do today. But I'm so grateful that God gave me the courage and the grace to want to please Him more than I wanted to please the people.

See, I like my friends, but I don't have to have them to survive. We have to understand that the one thing we cannot do without is God. We can do without anything else if we have to, but we cannot do without God. People that are willing to be different and be fully who they are... Matter of fact, I think I might as well say they're the only people that can do the only people that can do great things are those that are willing to stand up, and stand out, and pay a price.

Come on, we need to wake up and realize what's going on in "And the Lord regretted that He had made man on the earth, and He was grieved at heart. So, the Lord said, 'I will destroy, blot out, and wipe away mankind, whom I have created from the face of the ground, not only man but the beasts, and the creeping things, and the birds of the air, for it grieves me and makes me regretful that I have made them.' But Noah found grace (and favor) in the eyes of the Lord."

Noah was a man of integrity in his community, and he walked with God. Can I tell you something? No matter how bad things look, God's always got a man, He's always got a woman, and it only takes one. And it could be you. It only takes one. What one person can do. One man, Adam, sinned, and sin was passed on to all men. One God-man, Jesus Christ, became righteous, and righteousness was passed on to all men.

You've all got greatness on the inside of you. If you're a believer, you have a desire down deep inside of you to do something extraordinary, don't you? It's in there. And then the devil will come against your brain, "Well, who do you think you are? You can't do that." It only takes one. And God uses some of the most ridiculous people.

I mean, 1 Corinthians says that He uses the weak and the foolish things of the world to confound the wise. What the world would throw away, God chooses and uses for His glory.

So, let me just say this, do not discount or disqualify yourself. Do not insult God by saying that He cannot use you. God chooses the weak and the foolish things of the world so that no man can take the credit. I just love for people to look and say, "Well, that's got to be God. That has to be God because I knew you when."

I believe that many times, when we're going through some kind of temptation to compromise our integrity, I believe that it's not only an attack of the enemy, but I think sometimes God just kind of stands back, and it's a test for us because there's something else that God wants to use us for, but He's got to test us where we're at to make sure that we're going to handle it right. Amen?