Joyce Meyer - Where Is My Miracle? 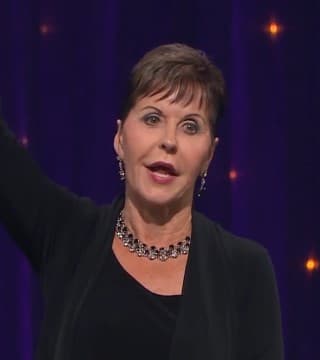 After Adam and Eve sinned, God already had a plan for the restoration of His people. Let me tell you something, God is never without a plan. And I know that there's a lot of concern about what's going on in the world today and what's going on in our nation today, but I wanna tell you God's got a plan.

He hasn't told us what it is yet, but He's got a plan and we're part of it, amen? And so, He planned to get His man back and He planned to restore that man's authority. You see, when Adam and Eve sinned, they gave their authority to the devil. The authority that God had given them to rule, and reign, and have dominion over the earth, they gave that to satan.

And that can be proven if you look at Luke chapter 4, verse 6, when Jesus was in the wilderness being tempted of the devil 40 days and 40 nights. One of the temptations was the devil said, "You bow down to me just this once and I'll give You all this and all this power, because it has been turned over to me and I can give it to whoever I want to."

But see, he didn't know as much as he thought he knew, because he was talking to Jesus, who actually, the Bible says, "For this purpose was the Son of God manifest, to destroy the works of the wicked one." So, he was actually talking to the one that was going to destroy him.

That has become very big to me in the last year as far as teaching. It's just like, we are partners with God. He works through people. God can do anything He wants to, and I'm not saying that He never works sovereignly apart from people, but all you gotta do is look at history.

So, God had a plan and He waited. See, God, God's good at waiting. We need to get better at it. And then He found Abraham and he made a covenant of faith with Abraham.

Genesis 12:1-3: Now in Haran the Lord said to Abram, go for yourself for your own advantage away from your country, from your relatives from your father's house, to the land that I will show you. And I will make of you a great nation, and I will bless you with an abundant increase of favor and I will make your name famous and distinguished, and you will be a blessing dispensing good to others. And I will bless those who bless you who confer prosperity or happiness upon you and I will curse him who curses or uses insolent language toward you; and in you will all the families of the earth be blessed and by you they will bless themselves.

Well, that sounds to me like a pretty good reward for just walking away from a bunch of stuff. And what you may not know is that Abram's family were all idol worshipers. So, God had to get him away from that.

Okay, so now listen to me. Here's a man who walks away from everything in order to have the will of God for his life, and some of you won't walk away from a group of friends. God has said, "Get away from those people." They're poisoning your life.

Or it might be something as simple as don't sit at that lunch table and listen to the gossip day after day after day. Get out, walk around the neighborhood, and talk to me. "Well, I wanna be part of what's going on." Are you understanding what I'm saying?