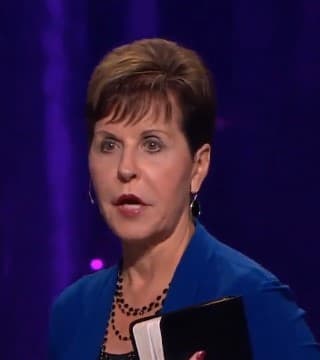 You know, Jesus didn't die so we could all be pitiful and pathetic and weak and wimpy and moan and groan and complain and murmur all the time and be afraid of everything. He died so that we could have a powerful, bold, amazing, fruitful life. And not just so we could have a good life, but so we can reach out to other people in love, helping them to find their way to Christ also.

The devil is alive and well on planet earth. But the good news is although he has power, we have power and authority. And the only authority he has is what we give him, and most of the time we give it to him through lack of knowledge, or sometimes through laziness, not just being willing to do what we know we need to do when we need to do it.

In Ephesians 1:19, the Apostle Paul prayed for the church, and he said, "I pray that they would know the power that's available, the surpassing greatness of His power, that is available to those who believe".

Now as a believer in Christ, this power's available to you, but if you don't believe in that power, then you won't experience it in your life.

I was a believer in Christ for many years, but I didn't believe that I was right before God through the blood of Christ. I didn't know that, so therefore although I was saved, I also spent every day condemned and guilty and full of shame from my past. It's not only important that we believe in Christ, but it's important that we believe everything that He said and every promise that He's given us.

And I don't know what kind of life you live, but I'm here to tell you that Jesus died so you could have power. And you do not have to be under something all the time. You can be on top and have the victory.

The Bible says so many amazing things like, "We are more than conquerors through Christ who loves us". I said last night that I believe to be more than a conqueror means that you don't even worry about the next problem that's coming up because you already know before you get the problem that you're gonna have the victory. That keeps us from having to be afraid of problems.

1 John 4:4 says, "Greater is the that is in me than he that is in the world". The greater one lives in us. You have power. Satan has power, but you have power and authority. "Behold! I have given you power, authority and power to trample upon serpents and scorpions," it's talking about demonic spirits, "And [physical and mental strength and ability] over all the power that the enemy [possesses]; and nothing shall in any way harm you".