Joyce Meyer - Living Up to Expectations 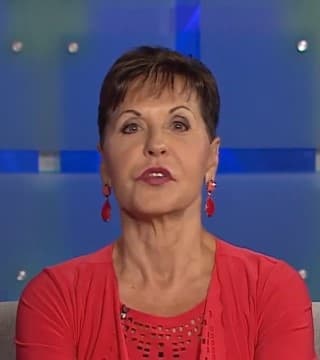 Well, I hope that what you've just heard was very helpful to you. Now, I want you to remember that your worth and value is not determined by what you do but who you are in Christ. Ruth Graham joins me now to talk more about this subject.

Joyce: Well, Ruth, this whole "In Christ" phrase, it's one that we understand pretty good now because we've both had to learn who we are in Christ. But you know, I was a christian for a long time and I never even heard that phrase, nor did I understand it. So, I know you've gone through some difficult things in your life. So, why don't you share with us about your story?

Ruth: Well, you don't have enough time. But the Lord, to make me aware that I was in Christ and that Christ was in me, but that I was living my life through Him, but He had to knock off some edges and it was not easy.

But I married young. I married when I was 18, which is too young to be gettin' married. And married a man who became unfaithful. And after 21 years, I divorced him. And it broke my heart. I'd grown up around honorable men. Never dreamed that this would happen to me. Didn't know how to react. Didn't wanna tell anybody. I was ashamed.

I thought I was the one to blame. I hadn't been enough of a wife. I hadn't been a good lover, or whatever. So, it took a toll, and then I became depressed. And nobody in my world had ever been depressed 'cause we weren't allowed to be depressed. You certainly shouldn't go to a counselor.

So, I was really caught between these things, and I was trying to live up to what everybody thought I oughta be and what I ought to do, and be a good mom and a good wife and a good housekeeper and do things. Until it just got too much and I began to think about suicide.

And the first person that I talked to was my brother-in-law, who was a wonderful psychologist. And he said, "Ruth, You're not crazy." And I thought, "Oh," 'cause I thought I was goin' crazy. But when you're trying to make the abnormal normal, that's crazy making. And so, I worked through that.

And unfortunately, quickly fell in love with another man and had a rebound marriage that last for about 3 months, and I fled him and came on home to see my parents and wondered, "What would they say?" You know, they warned me not to do it so quickly, and, "This isn't gonna work."

But I thought knew what was best. And drove up to see 'em. It was a 2-day drive, and just all sorts of questions. What was I gonna do with my children? What was I gonna do now? And as I rounded the bend in my parents' driveway, my father was waiting on me. And as I got out of the car, he wrapped his arms around me and he said, "Welcome home."

Joyce: so, you mean, he actually responded the way God would.

Ruth: That's right, exactly. Not that he always did 'cause he's not God. I know some people might argue with me about that, but that wasn't the end of it. Then I had to build my life, and that was difficult. And I married again.

I married a very fine gentleman that I was crazy about, and it ended up that we had... our families had known each other, but I began to speak and write and do what I felt God had called me to do, and he became very threatened and divorced me.

So, here I was again. And I thought, "Oh," you know, "What am I doin' here?" And I was so embarrassed and so ashamed and so hurt. But I picked up and went on. And then another man showed up, and he started showing me attention, and I thought, "Well," you know? He was a pastor and he was a counselor and he'd known my family for a long time. And I thought, "Well, this looks like it would be work and he could minister with me."

And so, we married, and it wasn't long before I realized that he was using me. I mean, hook, line, and sinker. He had a terrible accident. And while he was in the hospital, I found out he'd spent all my money and I was broke. And I didn't know what I was gonna do. And he was incapacitated. But through that, God was so faithful. And Joyce, what it showed me that all my life, I've been identified with a man. I was my father's daughter. Then I was my husband's wife. And all that was my...

Joyce: That was what gave you worth.

Ruth: Yes, and that I wasn't myself, and I wasn't who I was in Christ. I wasn't taking that on. I would have told you that, "Oh, I'm in Christ and Christ is my security," but that wasn't really true. And the Lord had to really peel back the edges and say, "Ruth, this is who you are, and you are worth a great deal. You are of value. You are cherished because you are in Me." And I just, that was an eye opening for me.

Joyce: I think it's good to bring these things out in the open, because even though the Bible says, "God hates divorce", He does not hate divorced people. And who would have ever thought that Billy Graham's daughter would have had those kinds of problems?

And there are a lot of unrealistic expectations that are put on people that are attached to other well-known people. And I know one of my children, when I asked him, "What was the most difficult thing for you growing up?" Because there were some challenges. And he really thought about it and he said, "You know, it was other people's expectations of me."

He got so tired of hearing, "Well, I wouldn't expect Joyce Meyer's son to do that." And so, he went to a Christian school where I was a pastor at the church. And it's so foolish when people do that to children because anybody's child has to have time to grow up, just like anybody else does. And so, you've had quite an interesting life.

So, help us, how did you overcome that? 'Cause there's gonna people come to our conference this year where you're gonna speak that are gonna have some of the same kinda problems, and they're gonna be very relieved to hear from you and from me because we're people... who would ever think that two people who had experienced what the two of us have experienced would be doing what we're doing today?

Ruth: And isn't that the grace of God? I mean, I would never have expected that the Lord would ever do anything with my life. And my children have had definite problems. I had one daughter with an eating disorder. My son was dabbling in drugs. My other daughter had two babies out of wedlock. I mean, we were a mess.

But when we were going through it, I remember telling the Lord, "Lord, if you can ever use this, you're welcome to it." And I never dreamed that I'd be sitting with Joyce and talking about my problems, but God is using this. And I'm very grateful that He does use us.

And so that journaling, being in the word every day... and communicating with God does not necessarily mean you have to get in a prayer closet and lay down. It means that you just are talkin' to God. And I do that all day long, first thing in the morning, you know, I'm talkin' to God. And I also realized that I had to have friends. We have to be in community. We can't be isolated. I had isolated myself because of people's expectations. It was too hard.

Joyce: Our secrets make us sick. You gotta get stuff out in the open.

Ruth: And we're only as sick as our secrets. And I just realized that I had to be in a community. And that's very important for people that are going through difficult times, is to be in a community and make yourself accountable. And I know that's a bad word.

But Bob Goff says that "Accountable doesn't mean you've got somebody looking over your shoulder, ready to jump on somethin' bad, but it means that they're holding you close." And that's a much gentler way of saying it. And so, I need people to hold me close and tell me when I'm wrong.

Joyce: And a lot of times, when people are hurting, there's a tendency to put up walls and to withdraw and to wanna keep all this stuff to yourself. And part of that is our problem, but part of it is also the way the Christian community responds to Christians that are having difficulty doing what we think we're supposed to do all the time.

And I love, and I'm sure you do too, 1 Corinthians 1:27 through 31, that: "God uses the weak and the foolish things of the world to confound the wise." And so, there's nobody that's unusable for God. He can use anybody to help other people. And so, instead of wasting our pain, we need to let God use that pain to bring glory to Himself and also to help other people.

Ruth: Well, and I love the title of one of your books, "God is not mad at you". And you know, so often, people think that He's standin' up there like this, ready to find somethin' wrong in us. And He's not. He loves us. He rejoices over us. He smiles at us. And that was a big thing for me to learn.

Joyce: Yeah, it was huge for me too because my father was always mad. I mean, you never really knew what about. He was just an unhappy, very troubled man, and of course, abused me sexually, and would beat my mother up on a regular... it was just a nightmare. And so he was always mad.

And you could do one thing one day and it would be fine, and you could do the exact same thing the next day, and depending on his mood, you might get in trouble for it that day. So, I really had a hard time with that, feeling like that God was mad at me every time I didn't behave perfectly.

And one of the reasons why I wrote that book is because I was in a conference one night and I said, "I have some good news for you. God's not mad at you." And people just responded. They were just, "Oh, man, that's exactly what I needed to hear."

Ruth: No, never does. And that's so freeing, to know that He welcomes us with open arms and He hurts with us. When we're hurting, He's hurting with us. He's not blaming us. He's hurting with us, and He cries with us. And I just think it's important for us to understand that God loves us that much. Well, He loved us so much, He died for us.

Joyce: Yes, while we were still sinners.

Joyce: That's the important part for people to realize. "While we were still sinners, He died for us."