Joyce Meyer - How Do I Make This Decision? 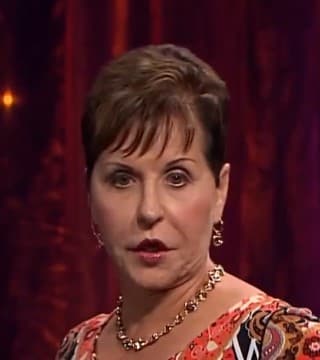 And I just felt like that the Lord put it on my heart to share this word about discernment, because, and please listen, if you follow your feelings, if you follow maybe what everybody else is telling you to do, or if you follow even your own just natural mind apart from the Holy Spirit, or if you would just simply do what you wanna do, you are more than likely gonna end up in big trouble.

And so, you've got a little something fighting with you, and that's what the Bible calls discernment. It's like a knowing down on the inside of you that maybe you shouldn't do that. You know, just because we want to do something doesn't mean that it's right, amen?

Now, sometimes we wanna do something and it is right, but if that's the case, we'll have a lot of peace about that. But when you've got a fight going on inside of you about something that you're getting ready to do, trust me, 'cause we've all made mistakes, you're so much better off to follow what you believe is the Holy Spirit.

Now, that doesn't mean that we don't need the gift of teaching of the word, but it means you don't have to have somebody telling you what to do all the time because you've got wisdom himself living on the inside of you.

In proverbs chapter 1, verses 2 through 5, there's a handful of words that I think we need to know a lot more about than what we do. Verse 2 says, "That people might know skillful and godly wisdom."

"Wisdom and instruction, discern, comprehend." See, that means to have thorough understanding of something. "And understanding, that they might receive instruction in wise dealing and the discipline."

"Of wise thoughtfulness, righteousness, justice, and integrity, that prudence." - You know, prudence is good management. It's taking the resources you have and managing them well. "That they might be given to the simple."

Just saying. 'cause sometimes they talk you out of believing in God and that's sure not the way to go. "That prudence might be given to the simple, and knowledge, and discretion to the youth." Discretion means you can keep a secret, that you don't...

Now, actually one of the gifts of the spirit that Paul talks about is the gift of discernment. And if I were you, I would pray for that every single day. Because I'll tell you what, we live in times right now where we desperately, desperately need discernment.

So, we have to get accustomed to not just living off the top of our head, and according to what we think, and according to how we feel. Do you know that feelings are the believer's number one enemy? You know why? 'Cause they're really fickle. You can feel like doing something on monday night, sign on the dotted line, and on Tuesday morning, those vacations have taken a vacation, i mean, those feelings have taken a vacation and you're like, "Well, I don't feel like doing that now." But it's too late, you've already signed up. Now you've got 7 years of payments.

How many of you are really in that position right now where you're really in between two decisions? You're really trying to decide what to do. So, I'm just gonna tell you this, and I don't go around saying this stuff real often.

I feel like this is really more of a word from God than just like a little exhortation from me, and so I really want you to pay heed to this that God has got a great life planned for you. And I mean, there's a lot of decisions we make and they're not that major, but if you're at a major decision-making point in your life or what you're deciding is something important, be sure that you go, and you know, I don't mean this to sound crude.

It's not in the Bible, but be sure you go with your gut. You know, because really, it's what we feel in here.

How many of you have ever married somebody and it turned out to be a disaster that you kinda knew in your gut you weren't supposed to do? Okay, now let me ask you, what kind of brand of stupid is it if we do stuff that we know we shouldn't do?

Okay, so one last time, make decisions for yourself. Don't be overly impressed by what everybody else. And I'm not saying it's wrong to get advice. I'm just saying, if you're gonna get it, you need to get the right kind, amen? And hear from God, and follow what you really have peace about and what you really think is wisdom.