Jentezen Franklin - Miracles In Your Home 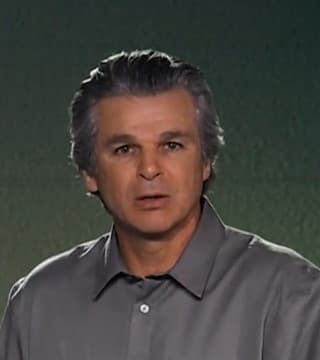 I wanna show you something that maybe you've never thought about as I begin the first message in this series, There's a story in 2 Samuel 12, and it says this in verse 3. "But the poor man had nothing except one little lamb, which he had bought and nourished". Notice that. Listen. "And it grew up together with him", listen to the specific wording, "and with his children. It ate of his own food, drank from his own cup, and lay in his bed or his bosom, and it was like a daughter to him".

In the text in 2 Samuel 12, Nathan was given an assignment from God to confront David about the sin that he had committed. He had committed adultery, and he had killed Bathsheba's husband to cover it up. He had spun a web of lies, and he was not the same man that he used to be. He's not the same David that we read about who would spend hours in worship. Private meditation and worship. Playing the harp. Writing songs of adoration to God. Something had shifted in this text. He was proud now. He was arrogant.

As a matter of fact, the Bible said in 2 Samuel 8 that David had gotten him a name. We would say he's made a name for himself. The scripture puts it that way - that he got himself a name. He had become famous. He was so famous that they were writing songs about him. The women would sing songs about David. David's name was so popular that mothers were naming their babies after they gave birth after King David. They would name their babies David. He had gotten him a name, but something had shifted in his heart. He no longer was a man after God's heart, but now he was living in deceit, and living in a lie, and living in adultery, and living in sin, and pretending. And Nathan the prophet was given the assignment to go confront this man. This man who had become so vicious, so bloody that he had killed an innocent man named Uriah to cover up his own sin.

So there's no doubt that Nathan was even probably approaching the palace that day with consternation, and fear, and worry. That he could just turn on me and kill me right there on the spot. And so he's going through his mind as he's approaching the palace. I could see his pace slow down. I could see him maybe kicking a rock down the road or whatever, just trying to ponder in his mind - what am I going to say? How can I somehow find that David that used to have a heart after God? Who loved Him with all of his heart, mind, soul, and strength. How can I reach him?

If there's a little flicker or flame left of the man that he once was that was so passionate for God. And now that he's famous, and he's powerful, and he's got wealth and palace, and everything that the world can offer, and his heart is so cold. And as he approaches the palace, he says I know what I'll do. When it's all said and done, if there's anything left of David, of the man he used to be - the spiritual, loving God man that he used to be - I'll tell a story about a shepherd and a lamb. And he walked into the palace that day, and David was sitting on his throne.

And David knew that he was a prophet from God. And David looked at him. And when he did, he said back to him, David, I wanna tell you a story. He said, what kind of story? He said, it's a story about a lamb. And suddenly a little flicker of the love that David once had when he was a little shepherd boy watching his father's sheep. Fighting bears and fighting lions to guard the sheep - the precious sheep, the lambs - he would hold them in his arms. And he said, I wanna tell you. He said, then tell me the story. And he said there once was a rich man, and there once was a poor man. And they both lived in the same city, and they both were in the same location - one on one side of town, and one on the other. The rich man held wealth, and power, and prestige.

David's leaning in now, and he's beginning to listen. He had flocks without number. He had hired shepherds who tended after his flocks by the hundreds and thousands. He had a beautiful home. And he was prominent, and he was powerful, and he had all that you could imagine. And living in the same city on the other side of town was a poor man. This poor man had times when his family went to bed hungry. They had no wealth. They had no house to speak of. It was just a shack. They were just poor people. A man married to his wife, and they had a little boy, and a little girl. They had children.

They were unknown and unimportant. The total opposite of the rich man was the poor man. He only had one possession that we're told of in the text. He had one lamb. One little lamb is all that he possessed. They lived in the same city, but they were worlds apart. One powerful. Famous. With wealth. With fame. With flocks without number. Thousands and thousands of lambs. And one family that's poor, and unimportant, and unknown by anyone. And all they had in their home - the Bible said they had it in their home as a part of their family. One little lamb.

When I hear the word lamb, I can't help but think of the Lamb of God. Jesus is known - if He's known for anything in scripture, He's known as the Lamb of God. When the Book of Genesis opens up, Isaac is asking his father on top of Mount Moriah, as the altar is built, and the knife is laying there, and the fire is kindled. And he says father, where is the lamb? The Book of Genesis opens with the question, where is the lamb. The New Testament opens in the first book with John the Baptist pointing his finger and saying behold. He's pointing at Jesus, and he's saying behold, the Lamb of God that takes away the sins of the world.

The Book of Revelation ends with the multitudes in Heaven on a sea of glass around the throne of God, and the Lamb is central. And they're singing in the Book of Revelation, the last book of the Bible - worthy is the lamb that was slain. Worthy is the Lamb that was slain. The Bible talks about a donkey that would have a colt. And this colt that this mule would have, or donkey, would have to be consecrated to God. This is talked about in the Book of Leviticus. And if it was the first-born - the Bible said that if they didn't bring a lamb for that first-born colt, then they had to break its neck. And on Palm Sunday, we read that Jesus, through the prophecy of Zechariah 7, comes riding into Jerusalem on a colt.

That's why the Bible said in Exodus 12 concerning the Passover, let every house have a lamb for that house. You've gotta have the Lamb for your house. And so in the story that Nathan begins to tell David - he says the rich man had exceeding flocks of lambs, but the poor man - listen carefully - did not have all the things the rich man had, but notice what it said in verse 3. That he had one lamb. And he, number one, nurtured it. The word nurture means to feed something until it grows. Just as a mother nurtures her newborn baby, it's the lamb that was nurtured in their home. It didn't live out in the back yard. It didn't live out in a barn. It lived in their home.

The Bible's very clear about that. And they were feeding the lamb, and the lamb was growing in their home and in their family. Their family grew up with the lamb. The children were familiar with the lamb. The lamb was a part of their family. The Bible said that he ate at their table. He ate at their table. The lamb. It was not a pet. It was not an animal that they had a distant relationship with. That was not really bonded and connected. He didn't stay out in the barn. In the backyard. Out in the field somewhere. But the Bible said that the lamb - it was not a petting zoo lamb.

See, that's kinda how we wanna treat Jesus is we just wanna go to church. And we wanna have a petting zoo, and pet the lamb, and then leave after church is over, and go do our thing. But this was not the relationship. This was the relationship of the lamb in the home. And the Bible said he ate at their table. He ate at their table. It's not like they had the lamb's little bowl over there, and he would eat in the corner like a dog or something. But he would - the lamb would be at their table. It's a beautiful picture of communion. It's a beautiful picture of the cup.

Jesus said this is my cup, and this is my body - the bread. And the lamb - they're having communion. Common union. And it's not like he's just a pet in a petting zoo that they see once a week, but he's living in the home - the lamb is. Now here's the story. You got one man who has thousands of flocks, and he's hired shepherds to take care of 'em. He used to be - David, you used to be the one that took care of the shepherd - the sheep - but now you're too important. You're too busy to spend any time with 'em. You just hire it out.

And the Bible said that the rich man had a traveler come through. A stranger. And instead of taking one of his thousands of flock - this is Nathan telling David the story, and David is totally captivated. He said instead of going out and killing indiscriminately any of his lambs by the thousands that he had - that he had no connection to - he went and seized the poor man's lamb that was the life of this family. And he slew the lamb for a stranger and fed him to this traveler.

And David was so enraged that David said, who is this man? He'll pay. He'll pay fourfold for what he's done to that poor man that only had one precious lamb for his family. You know what the Bible said? The prophet whirled around, and pointed his finger, and he said David, you are the man. And he said the judgement of the Lord will be even as you have spoken - fourfold. He lost Absalom. He lost Adonijah. Abner. And three of his boys died and then the baby. Fourfold. And he falls on his face, and he repents. And he writes Psalms 51. Wash me, and I shall be clean. Take not your Holy Spirit.

Do you have Jesus? Right where you are, would you get on your knees as a family? Would you just bow humbly before the Lamb of God as a family? Would you just gather everybody around there in the room? And would you invite the Lamb of God into your family and into your home again? I want every teenager to just say God, I wanna know the Lamb. I don't want some loose connection with Jesus. I wanna know Him. I want Him to be my life. I want Him to be the center of my life. Pray this prayer right where you are.