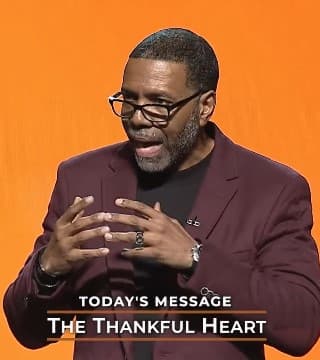 If you have your Bibles, 1 Thessalonians chapter 5 verse 16 through 18. Every year I have an opportunity to look at this, it seems like I get something new, that really blesses and I hope it changes your life as well. 1 Thessalonians chapter 5, verse 16 through 18. And he says, "Rejoice evermore. Pray without ceasing". It means don't stop praying. It doesn't mean, you know, pray, you know, all throughout the day for 24 hours a day, he says, "Don't lose the habit of prayer". "In everything, in everything give thanks; for this is the will of God in Christ Jesus concerning you".

Now, one of the things that I notice here is that there's a difference between giving thanks and having a grateful heart. A difference between giving thanks and having a thankful heart. I believe that God cares more about thankfulness that flows from the inside out than obedience we wear sometimes like a cheap suit. 1 Thessalonians 5 and 18, he says, "In everything give thanks: for this is the will of God". So, does God want outward compliance or heart that's capable of expressing his will and doing that authentically? We've gotten so caught up in the mechanics, that we're just kind of doing things, but it's not authentic. And the body of Christ has learned how to perfect phoniness like nothing else. And I'm telling you, God wants it from your heart.

So is God looking for a parrot or is he looking for sons and daughters who will give genuine thanks from their heart to God? And God's always wanting stuff from our hearts, and I just don't wanna us to think that it's just this outward obedience just doing it because he said to do it. Eventually, it's got to come from your heart or you won't continue to do it. You know, it's always better to obey than not to obey. I understand that. But I think God's after more than just mere obedience. God knows and he understands that thankfulness is the best thing for us. I want you to think about it. He's not just saying be thankful, that's the will of God for your life, but he is saying, be thankful because it's the best thing for you. You gotta to put all of that in perspective, that when God is requesting for you to do something, especially when he goes on to say it's the will of God for your life, it's the best thing for you.

Being thankful is gonna be better than complaining. Being thankful is gonna be a whole lot better than allowing all that miserable stuff coming in, but it even goes a little deeper than that. Look at 1 Thessalonians 5:18. This time I wanna look at it in the New Living Translation, goes a little deeper than that. God is the most purposeful being around. So I often like, "Why do you want us to be thankful"? And I mean, I started off being thankful it was more mechanical, until I got the depth of understanding that, wait a minute, God asked me to be thankful, there's got to be a reason. It's gonna be better for me to be thankful, even when I am sometimes tempted not to be thankful. Thanksgiving is God's will for your life, we understand that. However, lots of things happen around you that are not God's will, amen?

You don't need to be thankful for all circumstances, we understand that, but you do need to give thanks in all circumstances. So what kind of circumstances maybe you faced this past week? What kind of circumstances maybe you faced last month? What kind of circumstances you woke up and maybe are facing today? And while those things just may be rough and tough and challenging and trying their best to get in your head, trying their best to get you to think on 'em more than you should, that's the power that he's given to us to fight that stuff and not allow it to rent space in our mind, amen? You need to give thanks in all things. Some things are really bad, we understand that, they're not good, they're not God's will, and you don't have to like those things. But if you keep thinking and talking about the bad things going on around you, what's gonna happen? Pretty soon, they're gonna get lodged within you. You can't keep doing that.

Are there conversations you need to just quit today? Conversations you need to make your mind up, we're not gonna have those conversations today. Are you busy meditating on the stuff on the outside, and the more you talk about the stuff on the outside, then one day you wake up and lo and behold, it's now we're part of your insides? And I'm asking you today to take hold of what God is saying. These things are not good. They're bad things going on around you, and they wanna lodge within you, they don't wanna just be around your circle, they wanna be in you. They pollute your mind, they pollute your heart, they pollute your attitude. They make you sick in your soul. Your soul is the mind, and the will, and the emotions.

Well, thanksgiving is the solution. Thanksgiving is the antidote to this soul sickness. Thanksgiving is the thing that says even if some of those, some of that stuff on the outside of, even if it makes itself on the inside or makes its way in on the inside, you have an antidote, praise God. And you stop giving it open access into your soul, and you start thanking God while you're in the midst of a rough time. Might be at the doctor. Doctor just told you, you had something, "Father, I thank you I ain't got something else". You have got to take what God said that is good for you, and what's good for you is thanksgiving. What's bad for you is to complain about it, to murmur about it, to worry about it, and I'm telling you, there's a powerful supernatural result, an anointing that's waiting to serve the thankful, not just coming out of your mouth, but it's coming out of your heart, praise God.

And so when you turn your attention to good things, your perspective agrees with God instead of the enemy, then you're on your way to a good place. I mean, disgust, despair, depression, all that stuff, it won't stick around in the presence of thanksgiving. You try it. All of that stuff that's got you down, you don't wanna get out of bed, making you feeling depressed, nobody likes me, everybody hates me. Listen, it cannot survive in the midst of thanksgiving. So if I were you, and I don't know if you thank God quietly or thank God loud, but get somewhere where you can throw up a dozen or more thanksgiving, praise God. And listen, it might not be coming out of your heart right away, but keep thanking and praise the Lord. It might come out a little slow, but keep thanking and praise the Lord.

I receive the goodness of God, even though I don't deserve the goodness of God, it'll follow me all the days of my life. I am not of the tribe that settles. So you pick yourself up, you stir yourself up. Honey, if you ain't got but peanut butter and jelly this afternoon, you go home and thank God for every inch of that peanut butter and jelly sandwich, and you give him praise because he's worthy to be praised. Whatever the circumstances around you, cultivate thanksgiving within you. It's God's will for your life and it's good for your soul. Think about it like this, rather than hearing thankfulness as a command, maybe we can hear it as an invitation. That God's inviting me to this awesome place where thanksgiving can reign as a powerful weapon in our lives.

That's how the peace of God's gonna rule. You're gonna be thankful. "Let the word of Christ dwelling you richly in all wisdom; teaching and admonishing one another in psalms and hymns and spiritual songs, singing with grace in your heart to the Lord". Ladies and gentlemen, let's release the force of thanksgiving out of our heart, and put at bay all of the stuff that surrounds us while we're in that circle. All as well with you, all as well with your house, all is well with everything that concerns you, in Jesus's name, amen. Praise the Lord, amen.

Father, we receive this, we intend to walk in this, we give you praise for it now. In Jesus's name, amen.