Creflo Dollar - How to Live in the Supernatural - Part 3 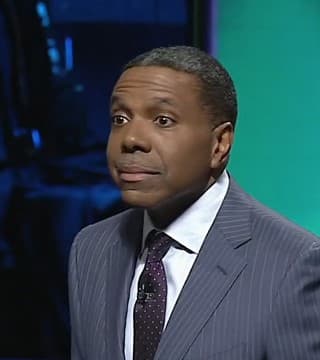 Today I believe it's just going to be revolutionary in your life. In this series, I have committed to making sure that I take my time because we don't want you to just know that the supernatural exists; we want you to understand how to operate in the supernatural, and that's what this is for. It is to graduate you out of this natural realm of existence where you find limitations into a supernatural realm of existence where all things are possible.

Father, we thank you for this opportunity to minister to these, your precious sheep. Thank you, Lord, that revelation knowledge will flow freely, uninterrupted and unhindered by any satanic or demonic force. And, Father, I pray that you will speak through my vocal cords and think through my mind. None of me and all of you. It's in Jesus's name we pray, and everybody said amen. Praise the Lord.

There's another realm that exists at the same time that this one exists. Now, for some Christians who hadn't been taught that, that just seems to be so ridiculous for you to say that. But you won't know about that other realm until you leave your physical body. You are a spirit being. You have a soul. You live in a body. When you leave your physical body, you step into that spiritual realm with spiritual matter and spiritual beings, and you can then comprehend them because you are of a spiritual substance. And so one of the things you have to understand is God, who is a spirit, created all things, which means that every physical thing that we see, all physical matter came from unseen matter. All matter that can be seen derived and came from what you can't see, and so the spiritual world is the parent world over the physical world. We've been, all we know is about the physical world.

So we think that everything that exists has to come out of the physical world, and we've been trained to believe that if you can't see it in this world, it doesn't exist. And I showed you last week 2 Kings 6 when Elijah and his servant were surrounded by that army. Then Elijah said, "There's more for us than against us". His servant couldn't understand what he was talking about, and Elijah prayed, "Lord, open his eyes so he can see". And his eyes, not that he was blind. His physical eyes were able to see, but he said, "Open his eyes into the realm of the spirit so he can see". And he saw angels and horses of chariots of fire surrounding that army.

Now, they had already, they were always there, and you see in Elijah who put more attention in the supernatural. He wasn't putting all of his attention in what he saw in the natural. And that's what most Christians, most of us have been trying to do; put all of your focus and relate more with what you can see instead of relating more with what you can't see. And so this training over the next few weeks is really to train you to understand that you live in a physical world, but there exists the parent world to all physical things. Now, if all physical things came from a unseen place, if all physical things came from a spiritual place, who is God, if even the pattern of the tabernacle that Moses got came from a heavenly tabernacle, or when we pray the prayer, Lord, we bind, we understand that whatever is bound in heaven pattern that we used to bind whatever is going to be binding on earth, whatever we loose in heaven is already loosed, whatever we loose on earth is already loosed in heaven. In other words, our pattern from the earth is already established in heaven.

I'm trying to take your mind like a fisherman and I'm trying to fish you out of the physical pond to get you to pay attention to a higher way of operation because anything that's physical came from that spiritual world, and the same thing is true today. There are a lot of things you need in the natural that have been made available to you in that spiritual world, but we're ignoring it and we're not paying attention to it. So I want you to listen to this today. Verse 1 he says this: "In the beginning God created the heaven and the earth. The earth was without form and void. Darkness was upon the face of the earth. And the Spirit of God moved upon the face of the water".

Verse 3, and God said. Verse 4, then God saw. Verse 6, God said. Verse 7, God had made. Verse 9, God said. He called, verse 10. Verse 11, God said. God said, God said, God said. And then at the end of this, it says in verse 31, "And God saw everything that he had made", what way did he make it? Words. He said it and then he saw it. He said it and he made it. And I am telling you that that authority has been passed down to every born-again Christian. You have the awesome power to use the most powerful thing in the universe, words, to make your way prosperous and to have good success. Is everybody with me now? I don't want to lose you on this one.

Look at St. John chapter 1, verse 13, St. John chapter 1:1-3 and then verse 14. St. John 1:1-3 and then 13. I want to lay this foundation, guys. It's important that you get this. This is some good stuff I'm going to share today. He says, "In the beginning was the," what? "And the Word was", but then the Word was? Now, I want you to see this now. We're trying to get Jesus in the earth, and Isaiah really got it. But throughout the old covenant, people used words to begin to partake and give birth into what was going to happen in this natural world. I mean, what an assignment. God's challenge was, "How do I get myself, who am a Spirit, into a physical body? How do I get myself into an earth suit? Well, like, I did everything else physically. I spoke words and the physical realm came into existence". Glory be to God.

So notice what he says: "In the beginning was the Word, the Word was with God, and the Word was God. And the same was in the beginning with God". Watch this next verse: "All things were made by him," the Word, "and without him," the Word, "was not anything made that was made," the Word. He just showed you. "In the beginning was the Word, Word was with God, Word was God, and nothing," no thing, "was made without the Word". What is it you need in this physical world and you're trying to make it without the Word? Imagine the awesome authority that we as Christians can have when we begin to understand the power and the authority of the Word to penetrate this supernatural realm where grace has made everything available. I'll teach you later, but grace was made especially for the new creation in the spirit world.

Look what he says. Go to Isaiah. This is the last Scripture and we'll get started. Somebody says, "Haven't you started"? No, no, man. I'm trying to get us all on the same page. I don't know where you came from, man. I don't know what them demons been saying to you during the pandemic. I got to make sure we're on the same page. Isaiah 55. Watch this. Isaiah 55, verse 8, "For my thoughts are not your thoughts, neither are your ways my ways". God said this, he says, "My thoughts are not your thoughts. My ways are not your ways". Now, watch what he says. "But this is what I'm going to do so you can have my thoughts and my ways. I'm going to give you my Word".

So it seems to me that as Christians we got to start thinking like farmers. We've got 66 bags of seed. What are you going to do with it? Seed in the bag, in the barn won't grow anything. Take the seed out of the barn, out of the bag and put it in your heart, and it grows everything. You hear me? Now, here's what I want to talk to you about today, but you'll see why I had to lay that foundation. There is a number one reason why manifestations of the supernatural are hindered in the lives of the Christian. Why are Christians walking around just as impacted as, in the natural as people who are not saved? There is no way you're supposed to be going through the same thing that somebody is that doesn't have access to the supernatural. You're supposed to be living way above fear, way above sickness, way above poverty.

Everything that the world's going through you should not be, like, right there with them, and there's just too many Christians that's just right there with them. You can't even, you're the light. You're supposed to be standing out when the darkness comes; but there's a reason why the light is not shining in the midst of darkness, there's a reason why supernatural things are not showing up. What's that reason? The number one enemy to the supernatural manifestation is something called hardness of heart. Now, what is that? Because you're assuming something that I know you're assuming it, but it's not right. It's not just rebellion to God's Word. So we have to let the Scripture explain to us what hardness of heart is. Go with me to the book of Mark chapter 6, verse 45 through 52. Hardness of heart. We got to figure out what the... hardness of heart is not just rebellion towards God.

So that's why it's important to have the Scripture 'cause somebody will say hardness of heart and then come up with any kind of general definition, and then you walk away still don't know what it is and then manifestations of supernatural should, you know, still not existing. I'm serious about this. I want everybody in our church that hears these teachings to begin to function above the natural realm. I mean, and I'm not talking about taking no long time 'cause you don't have to qualify for this. All you got to do is be saved and believe and stuff will start happening. How many of y'all ready for some stuff to start happening? You don't sound like it. I mean, some Jesus stuff ought to start happening. Listen, you ought to be able to speak to a fig tree and in 24 hours come back and see that thing responded to what you said. Why is that not happening?