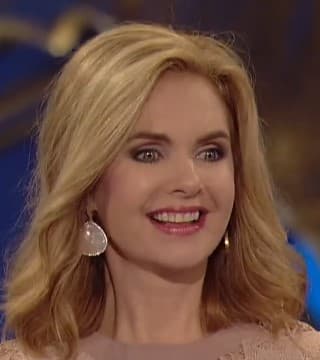 Can you imagine living in a big, beautiful house all wired with electricity, well-able to run your refrigerator, well-able to run your air conditioning, your, all of your lights, you can plug in all your small appliances, all the modern things that we have, can you imagine living in a home like that but not being able to run any of that stuff? It's all wired with power and electricity, but you didn't go out to the breaker box and flip on the switch. Wouldn't that be crazy?

I can't even imagine how they lived without power. It would be difficult to imagine because we have gotten so used to having our appliances plugged in. Listen, I bet nobody in here, pretty much, would go out of their house without charging their phone. Would they? And I don't know. If you're like me, if my phone runs out of battery, I'm looking for someone with a charger. I'm going to plug into that power because I don't want to be disconnected. I want my phone fully charged. It would be crazy to live without power when it's available to you. But do you know so many people are living in a house and they're never switching on the power? They are never switching on the breaker box.

You see, God has wired you with power. You are fully wired with power. But you got to turn it on. How do we turn on this power? Listen to what it says in Romans 10:9. Now, you have to understand this verse is so key to the power of God in you. It not only tell you how to get wired, but it tells you how to flow in the power. It says, "If you will declare with your mouth that Jesus is Lord and if you will believe with your heart that God raised him from the dead, then you will be saved. With the heart, man believes. With the mouth, man makes confession unto righteousness".

You see, when you make Jesus the Lord of your life by saying, "I believe God sent his son. He died on the cross for me. He rose again on the third day so that I can be free from sin, that I am on my way to heaven", guess what happens. You go from a house, a temple that has no wiring to being fully wired. You're fully wired. But to switch on that power that is in you, it says, "It's with the heart, man believes, and with the mouth, he confesses". You see, that is the switch that turns on the power.

I talked to a man the other day and he told me, "Victoria, I've had seven strokes. The doctor has found three lesioned areas on my brain". He said, "I found myself walking with a cane. I could hardly get around". He said, "I'm a pastor of a church". He said, "I began to realize my life is just powerless and I began to say, 'God, what is going on? Why do I deserve this? What is wrong'"?

And he said, "Victoria, I felt in my heart and I saw, in the spirit, I felt like I saw this sewage swirling around of thoughts and I had been thinking this, these poisonous thoughts and confessing these poisonous thoughts about myself for so long that it drained the power right out of me". He said, "It was just like a sewage of thoughts. I had been so critical on myself. I had been confessing how I wasn't good enough, how, you know, I didn't have the favor of God, that nothing goes right for me", and he said, "That confession made me believe it", and he said, "I had no power".

Now, if I asked you today, "Do you believe that Jesus Christ gave his life so that you could be saved"? Many of you, most of you would say, "Yeah, I do. Let me tell you about it. Well, I was a little girl and it was when I was in Sunday school", or you would tell me, "When I was a young man, I met God and he saved me". You could tell me a beautiful testimony. I bet I couldn't talk you out of being saved. In fact, if I tried, you'd probably say, "Victoria, just leave me alone. You know what? I am saved. I am saved".

You see, when a circumstance comes against you, you have to say, "No, huh-uh. God says this about me. He says I am fearfully and wonderfully made". When you start feeling sick, "No. God is my healer. He is my redeemer. He is my pearl of great price". When people are talking about you, when they're pressing you down, no, no. I don't listen to that and I certainly don't repeat what they say. I don't repeat what the enemy says about me. I repeat what God says about me. That's my confession. That's what I believe in my heart and I'm not going to let anybody talk me out of it.

You continue to read and, all of a sudden, you see a transition in his prayer. You see a turning and he stops and he challenges that discouraging voice. He challenges those negative situations and he says this. He says, "Why is my soul so downcast? Why am I so discouraged"? He is like, "I'm a wired man. I'm going to flip on the switch", and then he begins to say, "I'm going to put my hope in God. I'm going to trust in the God, my Savior. I'm going to praise him yet again". You see, he turned on the power. This is a man that's, that's a man that served under God, that God loved. I believe he is there to show us that we can go down the road of discouragement, but we're fully powered up to charge our batteries, to change our situation, to supersize our strength, to stand strong against the power of the enemy.

"Hey, your bills are getting piling up and your finances are getting low". He wants you to say, "I'm poor. I'm poor. God doesn't", you know what Bible says? He says, "Let the poor say, 'I'm rich'". He says, "Let those people who are weak, you begin to say you're strong". Why? Because it's a principle that's been established by God. What you confess out of your mouth and what you believe in your heart will supersize your power. It will plug you in to the greatness of God.

Ephesians 3:20 says, "To him who is able to do more than I can think or imagine according to the power that works within me". It doesn't say, "According to God's power, according to if God is happy with me". It says, "According to what I release and increase on the inside of me". Listen. You're wired today and you can flow in great power. You can overcome every obstacle. You can climb every mountain. You can get out of every valley. You don't have to be discouraged. You don't have to be defeated. You're not a victim. You're a victor because God lives on the inside of you. Your words are weapons. Use them for yourself, not against yourself, and I believe you'll see the power in you come forth with great strength. Amen? Amen. He is an awesome God.