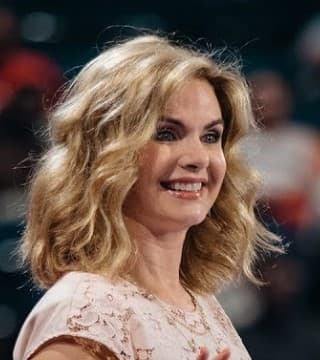 You sound amazing. You may be seated. Have you ever felt like you didn't have the strength to go on? Or maybe you feel like that the task at hand is just so difficult and why in the world are you doing it? You know, sometimes, we don't think we can do what we're facing. We don't think we can overcome the challenge or maybe you've been asked to do something. Maybe you've been put in a job or a promotion where it looks like, wow, I don't know if I have the talent and ability to be able to handle what I need to handle. But can I tell you today that in 2 Corinthians it says that God's strength is made perfect in your weakness? So anything that you don't have, God has the strength for.

So whatever you're facing today, God has all the strength you ever need. And that's comforting to know because sometimes we wanna look at the very end result and we wanna see how in the world we'll ever get there. But God is just saying, "Look at today. My grace is sufficient for today. Everything you need is here today". I think the trouble we get into is we start working on tomorrow's grace today. We say, "But what about tomorrow, God", when God is saying, "Don't worry about tomorrow. Just work on today. I got tomorrow handled".

You know, and then when we start doing these kind of things, we start questioning ourself. Then we start having these doubts and we have fears and maybe I'm not enough. Maybe I'm not adequate. Maybe I don't have what it takes. And then we start going down the wrong road. But God said before the foundation of the world he already knew you. And he's already equipped you to do whatever he's gonna call you to do. But you know what I've noticed about God? He puts things in us that we don't know that's in us. It's a mystery.

Have you ever done something and you thought, "How did that happen? How did I think about that? That's incredible". Well, that's God. Because God is smarter than we are. But he puts things on the inside of us so that we can mine the gold out of us. And we can't be fearful of that. We can't shrink back and think we don't have the ability because the ability's in there. If you're facing something, whatever it is today, whatever it is today, even if it's a dream and you want that dream but you're scared to attach yourself to that dream because you're thinking maybe it's just a wish and maybe it's not really what God wants.

And I wanna tell you something. Grab hold of that thing. Grab hold of it and believe you have what it takes. Draw strength from God. All you have to do is grab hold of his strength because when you are weak, when you are in doubt, it's no surprise to God 'cause God said, "I've already made provision for your weakness. Guess what? When you're weak, you're setting me up to be strong. If you handle it the right way, you're setting me up to let my power work through you". Don't close yourself off but open yourself up to God.

And you know what? I think about this. I think I'm up here today and the truth of the matter is there's probably a lot of you that could do a better job than me so I could really stay in that seat. And I'll tell you, sometimes I want to. But the truth is, God put me up here. So I gotta embrace the place that I'm at. I gotta just say, "God, you know what? When I'm weak, you're strong. Hey, it's not what I say, it's what you do, God. It's what the people hear, God. It's what you wanna get across to them".

Now, I'm gonna study, I'm gonna show myself approved. I'm gonna bite through. I'm gonna be determined. I'm gonna try to pick myself up every day 'cause, listen, there is no temptation that is not known to all of us. There's no struggle that we don't all face. Let me tell you something. No one's exempt. We all face the same thing. We all face the same challenges. But it's how do we deal with those challenges? How do we break through those barriers and those limitations? We gotta grab hold of the strength of God. It's great when people encourage you. It's wonderful when people say, "Man, that's a good job", or they tell you about your talents. They tell you about your gifts.

But how about when you look up and there's no one there to encourage you? And you're facing something? That's when you have to say, "God, I can't depend on people", 'cause people can do the best they can do but they can't do what God can do. And so there is a point that we can't depend on other people. We can't let them be our crutch. We've gotta say, "God, it's you and me. It's us, God. And you know what? We're a majority. We can do this together". I think too often, we just sit back and say, "You know what? It's too difficult for me so I'm not gonna do it". Because that's the comfortable thing to do and we let things pass that we shouldn't. And that's when we get unhappy because there's something on the inside of us that's saying, "There's more in store. You can do this. You can do this". It's always pushing us. It's always pushing us.

Now, it's a matter of are we gonna take this step of faith and do it? I've heard Joel say this a thousand times and you probably have too. He stands up here and he says, "I never knew this was in me". He said, "I worked behind the scenes for 17 years. I liked being behind the scenes. I never knew this was in me". And he'll tell you when he got up here the first time, you're talking about weak. He was weak. He was so weak, he said, "I had to hold on to the podium". He said, "What are all you guys doin' lookin' at me"?

You know, I'll never forget that first sermon. I looked down at Joel and I saw him wearing his father's shoes. Now, listen, these shoes were shoes that he and I had bought years ago in italy for his father. We wanted to give him something really special. So we bought him a pair of alligator shoes, something he wouldn't buy for himself. We used all the money we had so we couldn't buy anything for ourself. But we brought those shoes home and we presented them to his father, and his father loved the shoes. They were beautiful shoes. But when I looked up there and I saw him wearing his dad's shoes, 'course, a thousand things went through my mind. I was always sitting on the edge of my seat just saying, "God, give him everything I have and everything you have too".

Listen, we all need to borrow God's shoes. We all need to walk in that place. Because that's where we're gonna find our strength. You know, I truly believe God asks us to do things that are way over our head for the very reason that he knows it's over our head. He knows it's gonna be difficult for us. And I honestly believe he does that to keep us on our knees. To keep us dependent on him. Because, see, you're never gonna achieve what he's called you to do unless you're dependent on him. Because if you can do it in your own strength, I can tell you this. It's not God. Because God wants you to go beyond your ability and tap into his ability. He wants you to go beyond what you think you can do and get into what only you can do when you do it with God.

Walk in your father's shoes. Whenever you feel fear and whenever you feel doubt, just slip those shoes on and say, "God, I don't need to worry about tomorrow. All I need is to have enough strength for today. And God, I know that when I am walking in your shoes and in your strength, your grace is sufficient. You'll add the people to me that I need. You'll open the right doors for me. You'll give me the ideas. But I'm gonna wait upon you".

The Bible talks a lot about pulling down God's strength. It says, "Wait upon the Lord and he'll renew your strength". That means stay in those shoes. Don't get out of those shoes. Don't give up. Don't release what you have in your hands because you're afraid. Stay in those shoes. God'll bring that strength to you but he wants to see our determination. I can tell you this. I saw my husband's determination. I saw what it took to get to where he is today. I am so glad he didn't let his weakness be an excuse because we wouldn't enjoy the hope of the Gospel that we have coming from this place today. People's lives wouldn't be changed if he would have said, "It's easy to stay in the background", if that's the comfortable place.

In fact, he likes the background. But I can tell you, he's saying, "I'm determined because it's my call. And if God's called me, it's gonna be bigger than me. And if it's bigger than me, the only way I can accomplish it is by the strength of Almighty God". Walk in your father's shoes. He's gonna call you to great things. Don't shrink back. Don't put limitations on yourself. You've got exactly what you need. There's gold on the inside of you but the only way it's gonna come out is if you stand strong and you find it and you make it come out because God is your confidence and he is your God. And he's gonna take you to the places you need to be, amen? Amen. We love him so much today. He's a faithful God.