Victoria Osteen - The Power of Encouragement 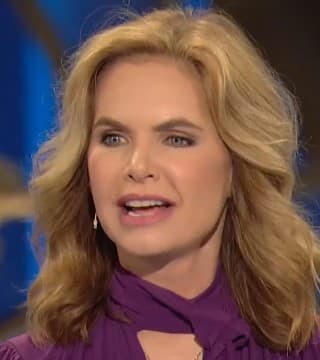 You guys sound good as usual. I believe that God wants every one of us to be a superhero. See, God wants us to be fearless and courageous. He wants us to be like the ones you see in the movies. You know how they are. 'bout like the time the enemy gets a hold of 'em, they fall down, he's got them in the gridlock, that superhero turns around and swirls around, and before you know it, he's defeating the enemy, or he comes out of nowhere, you know, you don't know what happened to him, and he comes out of nowhere and shows up strong on the scene.

You see, he may fall, but he shows up strong, and I believe that God wants us to show up strong. He wants us to show up strong not only for ourselves, but for other people. He wants us to be a superhero, and as we were singing together, that's how we're going to become this superhero powerhouse for Almighty God. It's only going to come when we do it together. You see, we're not islands among ourselves. We were not intended to be alone. When God created man, he said, "You need a helpmate. You need someone who's going to link arms with you. You need someone that can help you move forward, perpetuate my kingdom".

You see, we were never designed to be alone. The scripture says "That two are better than one", because when one falls, the other's there to pick him up. You see, we are going to defeat the enemy. We are going to move forward when we're linked arms doing it together. In Hebrews 3:13, listen to what it says. It says, "To encourage one another daily". Now, that sounds great. Doesn't it? "Boy, you look good today". "Oh, I like that presentation at work". "Well, you're so pretty". We should do that, shouldn't we? We should encourage each other daily. That's what God says, "Encourage each other daily".

You know, God formed us in our mother's womb. He made us and he knows how we operate. You see, we have instructions on how to operate to our highest potential and performance, and we can find them in the Word of God. So he says, "Encourage each other daily". Now, listen to the rest of that verse, because this is the weighty and meaty part of the verse. You see, if you just encourage, that's great. You'll do it if you want to. If you think about, "Maybe, I should go over and see my grandmother today, but I really don't have time. I've got a lot of things to do".

We don't take encouragement as seriously. But listen to this part, this is what God was saying would happen when we stand together, link arms and encourage each other daily. It said, "To encourage each other daily so the deceitfulness of sin doesn't harden our hearts". There's a weighty promise right there. When we stand together, guess what? We stand opposing the enemy's deceit. He wants to deceive us. He wants us isolated. He doesn't want us to have the support that we were designed to have. See, God says, "If you will encourage, you will be encouraged. If you will encourage, you can stand against the enemy for someone else".

I was thinking about how when Christian Covington and his team, they play on the defense. Don't ask me positions. I just know they play on the defense. I also know that the defensive line is there to stand together so that the other team, the opponent, cannot score on their team. I do know that much about football. You would be proud of me. But the way they do it is they stand together. They know each other is right there, and they're not going to let their opponent score. Do you know when we stand together, locked arms, we don't let the enemy score on each other. He cannot score.

See, encouragement means to impart courage. It means to make fearless, make brave, impart courage. That's what God is saying. Impart courage to one another, because see, the enemy wants to discourage. He wants to take our courage. He wants to subtract from what God is doing in our life. See, we have to stand together. We have to be superheroes. When I look at Hebrews 3:13 in this light, I feel like wonder woman. I think, "You know what? Every time I encourage somebody, I am slashing at the enemy. I am kicking him. I'm defeating him. I'm pushing him back". You ever see wonder woman? You can be Clark Kent, if you're a guy. Step in the phone booth and come out superman. But that's the truth, I really believe that. I believe if we understand the power of encouragement, we're going to be empowered to encourage.

I was talking to a staff member the other day. Hurricane Harvey, 5 feet of water in her home: came rushing in. Her family had to leave: her family, her children. They had to leave immediately. She left with nothing. When they got themselves settled into a place of dry ground and the reality started settling in that they had just lost all their material possessions in their home, everything, she was devastated. She said, "I was so discouraged. I was so overwhelmed. I felt numb and I couldn't even move. My husband, being the head of the house couldn't believe that he had just lost everything, and how was he going to rebuild his family's life"? He looked at her and he said, "We got to get out of this state. We have got to get out of this situation in our mind, this atmosphere of defeat. Let's go to the church and help out".

We were, people volunteers all over the place, distributing, doing what they could do. She said, "I simply sat there thinking, 'i can't. I don't even know what to think. I have no makeup. I have not even a hair tie to tie my hair back with. I don't want to go'". Then she began to put a smile on her face and said, "About that time, a friend of mine showed up, showed up with a bag full of makeup". She said, "Not only did God tell her the color foundation that I wore, she brought all the extras: the mascara, the blush and the lip gloss".

See, that's something that only a woman can appreciate. You see, her friend that day was standing in the defensive line for her. See, her friend that day allowed God to breathe life back into her soul. She was discouraged, she was overwhelmed, but that friend used the power of encouragement to get her one step closer to her victory, one step closer to her victory. She said she put that makeup on, went to her husband and said, "I'm ready than ever to go. I'm as ready as I'll ever be". And went to church and began to help other people. I saw her yesterday. If you looked at her, you wouldn't know that what she had been through. You wouldn't know that she was fighting the good fight of faith, because she said, "Everyday God's had someone show up to bring me courage and encourage my heart".

I heard it said like this, "It's not what happens to you, it's what happens in you, that makes the difference", and because she had a friend that day encourage her and impart courage, the thing that the enemy wanted to do, did not happen in her. It didn't happen in her. You see, her friend gave her that courage to keep her heart soft, to believe that God had possibilities, that it could be better than ever, that she could get up again and move forward. That's what encouragement does to us.

The Israelites in Exodus 6, it says, "They were too discouraged to believe. They couldn't even hear the words of Moses". When God was trying to tell them what he wanted to do for them, because they were so deep and buried under discouragement, they could not even hear about the God of the impossible. Don't allow anyone around you to be discouraged, because we are here to tell people about the God of the possible. They don't have to lose hope, because we serve the God that can do anything. If we will stay encouraged and continue to impart courage, I truly believe that that exchange works two ways, we will also be encouraged.

When you encourage, you'll be encouraged. When you're encouraged, you'll be strengthened to encourage yourself. Do you know there's studies that say, "When you encourage people, when you help someone, that it is an emotional high that literally releases dopamine in your brain and makes you happy". You see, it empowers you, and when you're empowered with this emotion of happiness, then you can go and help other people. When you're empowered with emotion of happiness, you can help yourself, 'cause see I truly believe there will be days that we have to encourage our self just like David, but God wants us to get good at encouraging others and encouraging ourselves, because those days that we can't, he'll provide, just like my friend.

You know, sometimes, encouragement is just simply showing up with a broom and a mop or a bag of makeup. You see, we need to encourage not only with our words, but with our actions. Ask God, "Give me somebody every day, God, that I can have a exchange with, that I can encourage in a meaningful and profound way". If we will all ask God to give us that one person, put that one person on our heart, whether it's your child, your husband, your friend, your co-worker, your boss, I believe that God will do things in our life that we can't even ask, think or imagine, amen? Let's push back darkness with our encouragement.