Victoria Osteen - Stand Firm In Your Yes To God 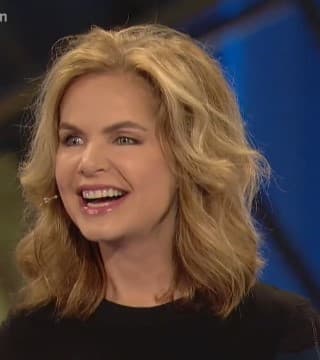 Thank you, Lord. We are excited to be in your presence and in the house of the Lord, amen? Have you ever had an opportunity presented to you, and you said, "No"? "No, I don't want to do that". "No, I can't do that". Maybe you didn't think you were qualified or maybe you thought there was someone else better for the job, or maybe you just didn't have the resources. You know, there's numbers of reasons that we say, "No", when certain opportunities present themselves, but then, have you ever done that and then later got to thinking, "Argh, what'd I say, 'no' for? I wish I'd have done that. Maybe I could've done that".

Have you ever wrestled with the "No" before, thinking, "Maybe I could", "Oh, maybe I should"? You see, I'll never forget one time when Joel's father was the pastor of the church, back in the old building, and we were worshipping God. It was in the middle of our worship, just like we were doing today. My hands were up. I was praising God. When I opened my eyes, Joel's father had turned around in his seat and looked at me and said, "Victoria, why don't you go up and do the prayer time"? Well, he wasn't talking about next week or the next week. He was talking about the end of the song that was just about over.

I'm sure I looked at him because I had never even remotely given him the thought that I wanted to get on the platform and do the prayer time. I don't even know where he got that, but I'll never forget Chuckling, "Ha-ha-ha-ha", with a nervous laugh, and I said, "Daddy-o, I don't think so"! You know, in his sweet, gentle way, he just smiled at me. He turned around, and he never said any more to me during that service. You know, I remember standing there thinking, "I just need to get out of here"! But when I got home, I was wrestling with that "No". I was so disappointed in myself, and really, quite frankly, I was mad at myself because I thought to myself, "If he thought I could do it, why do I think that I can't do it? If someone has faith in me, why don't I have faith in myself"?

So every time I'd go to church, I'd be praising with one eye open, saying, "Maybe not today, Lord", "But not today, Lord"! You know, he did ask me again. He did ask me again, and you know what I did? I mustered up that great big "Yes", and I got up, and I did the prayer time. You see, what that "Yes" did for me, it kicked in God's grace. It caused me to begin to rely on God. I prepared, but then I allowed the grace of God to work in me and work through me.

There's a scripture that says that God is working in us to will and to do his good pleasure. When you realize that you don't have to do everything on your own, and if it gets done, it's only because of your ability, when you realize that is not always the case, but that it's God who's working in you, it's God who's preparing you, if you will get into agreement with God, God can do amazing things in our lives, but God needs our "Yes". He needs to hear our "Yes". When I think about how that "Yes" kicked in and gave me the power to be able to do that, it was very much of a learning experience for me because, see, I didn't realize at the time that God was up to something, but when I look back, I realize that that "Yes" was one step closer to my destiny. That "Yes" was one step closer to the next step.

Now, the truth is, I don't know how many times I ever got back up on the platform when daddy was there, but I'll tell you what, that experience gave me the courage and the boldness when God asked me. "Yes", again. Listen, if you're struggling with a "Yes" today, if you're struggling between "Yes" and "No" when God talks to you, maybe you don't think you're equipped, maybe you don't have the right resources, maybe there's a plethora of reasons that you can make excuses.

Can I tell you, make a decision. Just settle it in your mind, "If God wants me to do it, I'm going to give him my 'yes', and I'm going to prepare and move forward", because let me tell you something: just like my father-in-law asked me, and I said, "No", he didn't hold that "No" against me, and your Heavenly Father is not going to hold that "No" against you. You may have said, "No", time and time again, but I can tell you, just like my father-in-law, God's going to ask you again. He's going to ask you again, so I encourage you to make a decision to give God your "Yes". Hold on to the promises of God.

Listen to what it says in 2 Corinthians 1:20. It says, "For no matter how many promises God has made, they are 'yes' in Christ, and so through him we speak the 'amen'." through him, who speaks the "Amen"? Who speaks the "Yes"? We speak the "Yes". God's promises are going to stand forever. They will remain, but he is looking for us to say, "Yes". He is looking for us to take that step of faith, to say, "God, I'm all in, no matter what it looks like". Hey, what in the world does "Yes" look like to you today? What does it look like to you today? What does your "Yes" look like when you think about God? "Yes, God, I'm going to forgive the people that hurt me". "Yes, God, I'm going to trust you in this very difficult time, God. I am all in with you, God, knowing that you can bring about favor in my situation". "Yes, God, I'm going to begin to reach out to people. Even if I don't feel like I have time, God, I know that you can make up that time for me".

Maybe you just need to surrender some things in your life and say, "Yes, God, it is time for you to work through me. I'm going to quit trying to doing it on my own, and, God, I'm just going to say, "Yes", to you. I'm going to take that step of faith, God, and let you open those supernatural doors for me". What does your "Yes" look like today? Because God is waiting on you to get into agreement with him, and as soon as you say, "Yes", to God, guess what? The grace of God kicks in. You see, you're not on your own. God doesn't want you to do it on your own. God wants you to do it with him in partnership and agreement with him, and you know what? You can say, "Yes".

I think about the saints of old. They wavered in their "Yes". They wavered in their "No". One day, they were believers, the next day, they were denying Jesus. Listen, God is not going to hold your "No" against you, but make some firm decisions to say, "I am going to trust God in this no matter what it looks like", "No matter how scared I am, no matter how buried that 'yes' is in my spirit, I'm going to dig it up, I'm going to work it out", because the Bible talks about this. It says you have to hold fast your profession of faith.

You have to hold fast that "Yes". See, that indicates that something is going to try to take that "Yes" from you, and we're very well aware that time tries to steal our "Yes", people try to steal our "Yes", all these "Nos" and shut doors try to steal our "Yes", but you know what? We're going to have to step over a lot of "Nos" and hold fast to that "Yes". Hold it tight. See, it's not just in your ability. It's in God's ability through you. It's in him, opening supernatural doors. Can I tell you, is it going to be easy? Absolutely not. Is it worth it? Absolutely, it is. God is a God of miracles, and he wants to take you step by step, but he needs your "Amen". He needs your agreement.

Think about Noah. When God came to Noah and spoke to Noah and said, "Noah, I want you to build an ark". Noah had no idea, first off, what a boat was, what an ark was, because no one had seen rain. It had literally never rained, the theologians said, but you know what Noah did? He said, "Yes, God". So he was fighting the odds because no one had ever seen rain, and no one wanted to get into agreement with his "Yes", but he said, "I'm going to stay in agreement with God's 'yes'," and he kept building that ark. It took years and years. People made fun of him. They even said, "Noah is crazy! He and his family are crazy people"! But what did Noah keep doing? He kept pounding the nails. He kept saying, "Yes", in his obedience to God, and let me tell you something, Noah's ark stands as a monument today, a sign of God's goodness, a sign of God's agreement. You see, we are in covenant with this great God, and he wants your "Yes".

I have a friend of mine who has a large family, many siblings, and she made a decision to say, "Yes", to God in a new way, and what I mean by that is she was going to let go of some of her past habits, and she was going to start serving God in a fresh, new way because he had given her an impression to do it differently. Well, let me tell you something, her family didn't think that was so keen. In fact, they made ugly remarks to her. They literally quit inviting her to certain gatherings because, "She had a new commitment to God", but can I tell you, she stayed faithful to her commitment. She held on tight to that "Yes" even when she wasn't invited to things, she continued to be kind to her family, show love, and when they did invite her, she showed up with all of her blessings to them.

Can I tell you today, after years and years of holding on to that "Yes", staying committed, making that decision even when it was tough, even when it would've been easier to go back, her "Yes" stands as an anchor of hope to her family, and many of them have come back to Jesus Christ because of that "Yes". Is our "Yes" always easy? No, but our "Yes" is always worth it when we serve a mighty God. Get up every day. Reconfirm your "Yes". "Yes, God, I am yours". "Yes, God, what do you want me to do today"? "Yes, God, I will trust you. I will forgive. I will take that step of faith". "God, I believe that when I get into agreement with you, you're going to do what I can't do. You're going to do the impossible", amen? Amen, thank you, Lord, we praise you.