Victoria Osteen - Lift Up Your Eyes 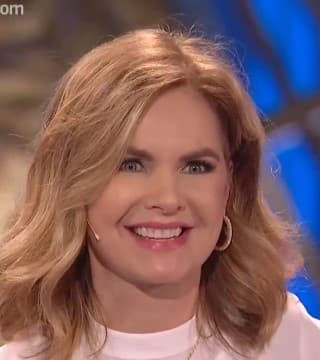 Your faith is amazing. Go out and tell people about this saving power of Jesus Christ, amen, that he can do what nobody else can do. You are his light in all the world. You see, we're all on this journey of faith together, and if we're going to experience the fullness of God's promises we're going to have to develop the ability to see beyond where we are right now. See, it's so easy to get stuck in a problem. It's so easy to see what didn't work out, what didn't happen, the mistakes we've made, maybe what someone else did to us, and then we think, "What's our next step, God? How are we going to get out of this"? It becomes difficult to see the next step sometimes, but when we take our eyes off of the circumstances, off of the problems that are trying to weigh us down and hold us back, that's when we can put our eyes on the promises of God, not the problems. We can't set our eyes on the problems. We have to set our eyes on the promises. That's how we're going to rise above where we are right now. We have to look beyond were we are and lift our eyes.

In the book of Genesis Abraham was called by God to go on a journey of faith with him. He spoke to Abraham and said, "Leave your father's house". Abraham did. The Bible says he believed God and it was credited unto him as righteousness. He left his father's land. He took his family and his nephew, Lot, and they went on this journey, but there was a point in his journey where Lot, his nephew, and himself had acquired so many possessions that they had to part ways. The land could not sustain both of them, so Abraham looked at lot and said, "You pick first. Which way do you want to go? What direction do you want to go, Lot? I'm giving you the first choice".

Well, Lot looked around, and he found a place that he thought would be perfect for he and his family. The Bible calls it... Was east. It was towards the Jordan. It was lush in foliage. It was a city that was bustling. It was places of opportunity, so Lot choose that part of the land. When Abraham looked the other direction, what he saw was dirt. He saw was dust. No development, just land, and he thought to himself, "Wow. What in the world have I gotten myself into"? But see, it was at that point that God spoke to Abraham, and he said, "Abraham, lift up your eyes now. Lift up your eyes now. Look out as far as you can see from the north, the south, the east, and the west". He said, "What you can see, the land that you can see, I will give it to you. I will give it to you".

You see, it was this point that Abraham had to lift his eyes. I love that phrase, "Lift your eyes", because these lifted eyes became the theme of Abraham's life. You see, God knew that Abraham could easily get his eyes on the wrong thing. He could have easily said, "Why didn't I choose first? Why did he get the best? Now I'm just stuck in the dirt, in the dust, and he's over there prospering. Why did I make that mistake"? But see, God wanted him to lift his eyes so he can see beyond the dust and the dirt, and begin to see his destiny unfold, begin to see what God wanted to do in his life.

Do you know the name "Lot" means "Veil", and when he separated from Lot, it was as if God lifted the veil from his eyes, and he was able to see God in new ways. You see, God wanted to reveal himself to Abraham in unseen ways. You see, it may have looked like Lot got paradise, but Abraham, he got the promise, and you do too. You have the promises of God. In fact, the veil has been lifted from your eyes. It has been torn in two by the power of Christ. And God wants to show you along this journey things you haven't seen before. He wants to reveal himself in powerful ways.

You see, when God spoke to Abraham and told him that he was going to be a father of many nations, said "Abraham, I'm gonna show you this land that I'm taking you. I want you to inhabit it. I want you to possess it. I'm going to make your seed great, and I'm going to bless people all over the earth", his name was Abram. God hadn't changed his name yet to the father of many nations. He was just Abram, a man that was believing God, going on this journey of faith. In fact, he didn't look anything like what God was saying about him, but God's promises are spoken in the unseen realm. God's promises are spoken but not seen yet.

God's promises are spoken but not seen yet. That's why the veil was lifted, so that Abraham could see into the supernatural realm, so Abraham could get a glimpse of what God wanted to do. He wanted to take the veil off of Abraham's eyes so that he could see what God was doing. You see, God's promises are progressive. They unfold in his timing. They may not be seen yet, but it's only a matter of time until God gets you to where you need to be, until you start looking like God says you're going to look, until you start having what God says you're gonna have. It's progressive, and it's in God's timing.

I have these beautiful lemon trees in my backyard. I have two of them, and they're full of fruit right now, and a friend of mine, we were in my backyard, and we happened to be walking by the lemon trees, and she stopped, and she paused for a minute because they're beautiful, full of fruit, and she said, "Those are the most amazing lime trees I have ever seen. I started to laugh, and I said, "Those aren't lime trees. Those are lemon trees". She said, "Those are lime trees. They look like limes to me". I said, "Oh, okay". I said, "The fruit on those trees are still in process. They're not finished yet. They don't look right now the way they're going to look. They're green now. Yeah, they look like limes, but they're going to turn yellow in just a matter of time".

You see, Hebrews 11 says we inherit the promises of God through faith and patience. You, just like those lemons, are in process. You are becoming everything God wants you to be. You may not look like you want to look, you may not be where you want to be, but don't devalue your journey. Don't start thinking that the journey isn't worth it. The process is what builds your strength. The process is what develops you. The process is what makes you become what God's called you to be. You see, Abraham didn't despise the process. He proved God to be faithful and true. Abraham went from test to test to test of his faith. He went through challenges. He didn't even have his promised child till he was a hundred years old, but he saw the character of God.

You see, someone else may look like they have paradise, but don't forget - you have the promise. You're in the process, and you are becoming everything God wants you to be. If you find yourself consumed with a problem today, you're going through a transition in your life, you're wondering, "How is this going to work out"? It's time. It's time. It's time to lift your eyes from the problem and set your eyes on the promises. You got to realize beyond this place is greater heights, greater victories, greater strength, greater anointing. It is time to shift your perspective to God's promises. Listen, I believe if you won't get stuck, if you won't settle where you are, if you'll continue the process, you will become just like Abraham, and you will see God's faithfulness, you will see his provision, you will see his promises, and you will become everything that God intended you to be, amen? He's a faithful God. He's a faithful God.