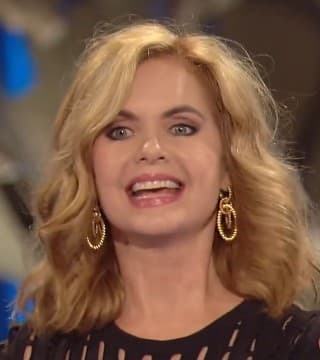 So they were saying, "Either you can have a bad attitude and you lack success no matter how bright you are or you can have a good attitude even if you're not the brightest person". That sounds pretty good to me. I'm all in. See the truth of the matter is, in the book of numbers, there was two men who displayed this exact study. Stanford just should've studied Joshua and Caleb. Because these two guys were amazing in their attitude. Now many of you know the story. Moses took twelve leaders from the tribes of Israel and he told them to go into this land that God had already promised to give them and spy the land out. He said, "Go in. Check out the land. Bring back some produce. Bring back some of the vegetation that's in the land, so we can kind of have a glimpse of what's in that land".

You know, and it talks about how grapes were in season and how they had to carry a cluster of grapes like on a long bar and it took two men to get the grapes back to the camp. Listen, Randall's doesn't have grapes like that. They were big grapes. The land was flourishing, but also in that land they saw giants. All 12 of those spies came back and they saw the same thing. And they said, "Yes, the land is good". Now, isn't it interesting about attitude. We can all see the same thing, but we're going to formulate our attitude by the way we think. You see, how you think is directly related to your report. What's gonna come out of your mouth.

The Bible says that, you know, "Out of the heart the mouth speaks". That's why you can't hid a bad attitude for long. You can try to push it down, you can try to fake people out, you can try to act like you're enjoying somebody's conversation when you're thinking bad thoughts about them the whole time. But let me tell you something, eventually it's gonna show up. It may not show up in that person's conversation but I guarantee you it's gonna show up somewhere else in your life, because bad attitudes spread. They have legs. They are transferred into other areas of our lives.

So, back to my story, they all saw that the land was filled with beautiful vegetation, great soil, but it also had giants. It also had some strong people in the land. So, ten of those leaders came back and they reported that, "The land is good. We agree on that, but the way we see it, we see it with giants. We see it with walled cities. We see those people way bigger than us. In fact, we are small in comparison to them". They actually describe themselves as grasshoppers. About that time, Joshua and Caleb, they were like, "Shh, shh". The scripture describes them as trying to hush the bad report.

Have you ever thought in your minds, you know, you had this idea and you're excited about what God want to do in your life? Maybe it's a promotion. Maybe, you know, you're really gonna believe this is the relationship for you. It's gonna work out. There's some things that you're really believing for are gonna happen in your life and it looks good. But then all of a sudden those negative voices start telling you why it's not good and how it's never gonna happen.

You know what that tells me today? That tells me that we gotta drive out negative voices. We can't be negative talkers. We can't transfer negative reports to our family. We can't transmit fear to our children. We can't discipline them from our place of fear. Listen, we want to build faith. We want to be like Joshua and Caleb. Whenever you're blaming someone notice this. And this is what the Bible tells us they did. They literally were so discouraged with this bad report that they began to cry out and blame Moses and Aaron for all the trouble.

See, they couldn't even see the miracles and the good things, for the fact they were so focused on all their trouble: all the bad report. So they began to blame and point the finger. Don't you know that was a bad day? It was a bad day. I'm sure that there was disputes among those people that didn't even have to be there because they were so negative. They were such a bad mood. They couldn't see anything. Have you ever been around bad people in bad moods? Well that whole camp was in a bad mood. And you know what happened? They stayed there for 40 years total. They complained and the remained for 40 years. And that's what a negative attitude does. That's what complaining and griping and grumbling does.

So, if you find yourself in a place where you're trying to lay blame, I want to encourage you to check your attitude. If it's someone else's fault you need to check your attitude, because this is my point today: Joshua and Caleb had a different spirit. They had an excellent spirit, an excellent attitude. They were at the same place the other ten men where, but they weren't gonna drop to the depths of the negative situation. They weren't gonna allow their faith to be destroyed. And you know, as a result of that they actually thrived in the wilderness when everyone else died in the wilderness. Because they were different.

And God has called you and I to be different: of an excellent spirit. You may be in a place right now that's hard and difficult. You may not see how you're gonna get out, but you think about Joshua and Caleb and how they continue to promote the Lord. They continued to work for God. They didn't die but they thrived in the wilderness. And do you know, because they thrived in the wilderness they were able to take the next generation of Israelites into the Promised Land and possess what God said they were gonna possess?

You know what I find really interesting about this good attitude that they had? The Bible said that when they went into the Promised Land, Joshua and Caleb, and took the next generation, they said to the Lord, "We feel better than we ever have. We feel stronger than we ever have and we're ready to take this land". You see, they were ready to take the land back then. Their report was, "We can certainly take this land". And that's how we have to be. We have to be of a report, "We can certainly do this. We can certainly fight through this because God is gonna actually fight our battles for us".

If we'll just stay in an attitude of faith and trust God can do it. When Joshua took the next generation of Israelites into the Promised Land this was his motto: this was his vision statement. And I think it's a great vision statement for each and every one of us. He told those people. He said, "Look, today choose who you're gonna serve. Choose who you're gonna serve. Are you gonna serve negative idolatry? You gonna serve bad attitudes? What are you gonna serve? But I'll tell you what I'm gonna serve and what I've always served. And for me and my house we are going to serve the Lord. We are choosing to take the high road. We're choosing to overlook an offense. We're choosing to hush those negative voices whether they're in our own mind, wanting to come out of our mouth, or they're from someone else. We have the choice and that's the bottom line".