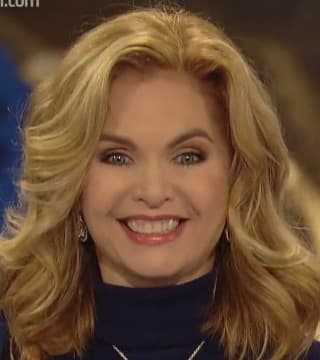 How many of you guys know that, sometimes, the smallest thing can just irritate you, things that really don't matter in the long run? I was with a girlfriend of mine several years ago and she was showing me her vacation photos. I hate to date this, but it's when we used to go get them at Walgreen's. She said, "I just picked up my vacation photos. Let's look at them". So I said, "Okay", and so we began to look at this beautiful pictures of blue skies, sandy beaches, all these cute little shops at the port, just so much fun, and we're looking, and I noticed she was getting a little more irritated and she was going through the pictures more quickly, and I was like, "Okay, okay". You know?

I was going to kind of really check them out and talk about them. But then, all of a sudden, I noticed she began to say, "I look terrible in that picture. I don't like that picture. I am not wearing that outfit again. It doesn't photograph well", and she began to pick herself apart in these pictures. See, I went from enjoying her vacation to looking at something about herself that I couldn't even see. You see, sometimes, we forget the big picture. We forget to look at the blue skies, the sandy beaches, the smiling faces, our children because we see that speck on the picture, and that's all we focus on. You see, her memory, all of a sudden, became negative.

Think about Adam and Eve. They were in a beautiful garden, lush, green garden. They had fruit everywhere. They could eat all they want, never gained any weight, no laundry. They were in this amazing God-given garden, and, one day, eve got her eye on a single bush, a single bush in the garden, the only bush she was asked not to touch, and that day, that bush became the biggest thing that she saw. In fact, that bush was so big, it distorted the whole view of the garden. You see, that bush was the speck on the picture. She didn't see the whole picture because all she could see is what she didn't have.

Listen, let's don't see the specks in our life. Let's begin to see the whole picture, what we do have. Let's don't let a bush distort this amazing life God has given us, the relationships that we have because, in the long run, it really doesn't matter. I think we could all say, if we step back, that we've seen some specks that messed some things up for us. We've seen, we've focused on some things that we didn't have and we forgot to see all the great things that we do have. Listen, I don't want to live in regret. Do you? I want to enjoy what God has given me right now, the beauty of the moment. I think about my friend, and, today, I bet if she pulls those same pictures out, she is going to go, "I look pretty good in those pictures".

You know, sometimes, when the years go by, you don't look as bad as you thought you did. When my kids were very young, we were at the old building and it was a Easter Sunday and everyone was dressed up. You know, all the family was there, the cousins, the aunts, the uncles, you know, the grandmothers, everyone was there and looking so good. You know, we were all there together and I remember thinking, "I want to get a Easter picture. Everybody is so cute", all the little outfits the kids had on, and about the time we could round everybody up to get this Easter picture, we're placing everybody, I look and there is my two little kids.

They had changed out of their easter clothes and put on their play clothes. They're standing there with some shorts and a raggy old t-shirt and some tennis shoes and I am, like, looking at them and it was enough just getting everyone rounded up. There wasn't time for me to go change them and bring them back and I remember thinking, "I am so frustrated", you see, because I wanted this picture to be perfect. It had to be my way. It was my picture. Let me tell you what. That picture is one of my most treasured possessions today, one of my most treasured possessions, but, at the time, all I saw were those khaki shorts and tennis shoes and green t-shirt that I did not want in my picture.

See, we need to step back. We need to remember what life is about. It's about God's goodness. It's about our family. It's about the big picture. So often, we want it to be perfect. We want it to go our way and when it slightly takes a curve, it messes everything up. That's not the case. It really doesn't mess everything up and we have got to remember, you see, my little kids, they had no idea. They had no idea. They're just kids.

You see, I would rather have a good relationship with my kids than to be all upset with them. Let me tell you what. They're in college now. I would give anything to just have a picture with them today. You know? I don't care what they're wearing. I really don't. Have you ever wanted things so perfect and it didn't go your way? I know a lot of mothers can relate to this. We want our kid's birthday parties to be spectacular. We want Spider-Man there on time. We want the princess coming with the right clothes on. We want everything perfect.

We get so uptight planning and anticipating, we forget who we're celebrating. We don't even relax and realize, "This is my child's birthday. I am going to enjoy this birthday party and celebrate them". Listen, everything doesn't have to be perfect before you enjoy your life. Let's don't look at the speck. Let's step back and see the big picture. This holiday season, we're all busy. There's a lot going on. Let's make memories that will last and that we can enjoy for a lifetime. Okay? All right. That's so good. Praise you, Jesus. We are going to see the big picture.