Victoria Osteen - Know Who You Are in Christ 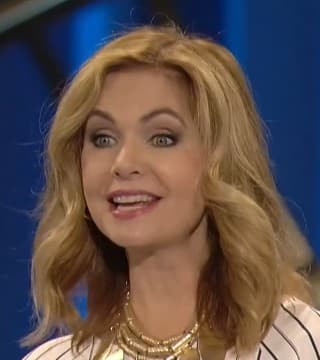 Hallelujah! We are grateful people. The Bible says in Genesis that we are made in the image of God. You see, the image that we carry on the inside of us has a lot to do with what we reflect. It has so much to do with what we identify with, how we see ourself, what we go after. In fact, our image is our source of strength and confidence. That is really the key to living the abundant life that Jesus came to give us. Now, our image was distorted in the garden. It was separated from God but God said, "I'm going to rebirth this image in you".

So you have been re-birthed with the image of God when you said, "Yes", to Jesus. But too often, things that happen in our life, maybe the way we were raised, a divorce, hurts and pains, try to distort or smear that image, that tries to cover up the true you, the one that God created in his image. Then you begin to identify with your circumstances. You begin to identify with the pain, when all along God never intended these things to hurt you. He intended you to know who you are in Christ Jesus and to identify with him and his power that lives in you.

You see, if you don't know who you are, you won't know what to identify with. It's interesting, because God knows what we're made of. He knows who we are. He knows that we were made in his image. The question is today, do we know the image that's on the inside of us. Or have we allowed things to distort that image?

I was thinking the other day, the only way I know what I look like is because I can see myself in the mirror. I get up in the morning, I wash my face, I brush my teeth and there I am, looking back at myself. We all know what we look like only because of the mirror. Now, granted, someone can describe our looks, our physical. But if you asked two or three people, I bet you'll get a different description every time. But when you look in the mirror, you see the image of yourself. You know, if someone shows me a picture of a big group of people and I'm in that picture, I can locate myself because I know what I look like. I can identify who I am because I've seen myself in the mirror. I know my image.

You know, some people go around saying, "I'm divorced". They go around with that image. "I'm divorced. I'm a divorced person". Some people say, "I was mistreated and abused. I'll never get to where I need to be". They go around with this victim mentality. But all the while, God says, "You are not a divorced person. You are not a victim. You are made in my image. You are a victor. You need to get your image back". When we allow the Word of God to create that image on the inside of us, when we put ourself in church, when we listen to God's word, we're creating and making sure that image stays in place.

If you had a very important event, I guarantee you would go to the mirror and check your hair, check your tie, make sure it's straight. You don't want to go out there with your tie going that way. You know what? You'll check yourself. You adjust yourself, and you know, when you put yourself in the presence of God, what you're doing is you're readjusting and affirming your image on the inside because you want to be able to locate who you are in a world that doesn't know who it is. You see, there are so many opinions out there that if you don't know your image and your identity, you may allow somebody else to put their identity on you.

I was talking to a young girl the other day and we were talking about this very thing, about the image on the inside of us and how we live in this place of strength when we have God's image, and she said immediately, she said, "Victoria, it's so crazy". She said, "I allow people to say things to me and it determines my worth and my value. They can literally say the wrong thing and I walk off ashamed". Have people ever tried to label you? Have you ever taken something, maybe even out of context, and it's so funny because that image is so covered up you don't really know if that's who you are or not?

You remember when I see myself in that picture, I can locate myself. I know that's me in that picture. Now, if someone holds a picture up and they say, "Look, Victoria, look. Look at you right there", and that's not me, you know what I say, "That ain't me. That's not me. I know what I look like. I know my image", and see, so many times people are trying to tell you who you're not. You've got to know, "That ain't me". If someone is trying to make you feel bad, you know what? That's when you just stop and you say, "You know what? I know who I am". You don't have to fight back.

You see, the image of God is not about arrogance. It's about humility and strength. You know, it's about being assured and confidence. Still waters run deep, and God wants you to run deep. He wants that image to be deeply impressed in your very being. It's interesting because I really feel like that identity and authority go hand in hand. Now, we know when you have authority you carry power. But if you don't know who you are, you can't carry much power.

Can you imagine a policeman not being able to believe that he can stop traffic? Now, if you put me out there, I am not going to step out in the middle of that traffic 'cause I don't carry that authority. I don't carry that identity. But you know what? He has authority and power because he knows his identity. If I go to the bank 'cause I need some money out of my bank account, I go to the bank, go to the teller, get all my stuff together, and I say, "I want my money". She's going to say, "Where's your identification"? If I'm not carrying my identification, doesn't matter how much money I have in the bank, I'm not getting it. I have to know my identity.

I have to know that identity or I'm not going to get what's rightfully mine, and can I tell you, you've got so many things out there that are rightfully yours but unless you know who you are, unless you identify with the power that lives on the inside of you, you won't get what's rightfully yours. The Bible says it's the enemy who comes to steal. He comes to steal. Have you ever heard about stolen identities? It's rampant these days. We get all this protection, trying to take care of our identity.

You see, you've got to protect the image on the inside of you because the enemy wants to steal that image. He wants to steal your worth and your value. If you don't know who you are, you can't have what God said you could have. You know what makes me so irritated? Is that it's not really just about me. It's about the God in me, and when the enemy steals from me, you know what he's doing? He's stealing from God. I don't want him stealing from God. I want to protect what's God's.

You see, sometimes we think it's about ourself but it's about the greater one who lives in us. He's given us the privilege to bear his image. I can't think of a higher calling on this earth than to bear the image of Almighty God. If you don't have a purpose, I want to give you one today. You are the bearer of God's image. You see, when you know who you are in Christ, you don't have to look for other people to validate you. You don't have to try to squeeze out of people what only God can give you.

2 Corinthians says this: "God identifies us as his very own". He's already identified you. He knows who you are. Do you know who you are? Don't let anything cover up your identity. Know who you are. People who know who they are pray bold prayers. They believe that God is working in their life. They praise in the midst of difficulty. They push through because they know on the other side God's going to be right there waiting for them.

People who bear the image of God know they look like Christ Jesus so they're kind, they're compassionate, they're a servant of all because they know that the first will be last and that if you want to be a leader you've got to be a servant first. They're not easily offended. They know who they are in Jesus Christ. Take on his identity today. Don't let anyone label you. There's no circumstance that defines you. God and God alone defines you. When you put on his identity, he's give you his victory and you'll get to where you're intended to be, amen?