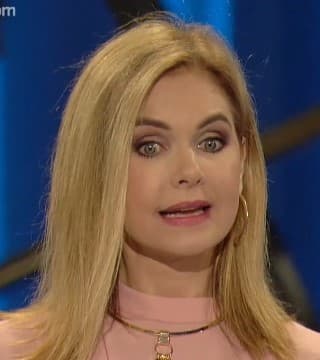 It's good to have you in the house of the Lord today. I want to encourage us all this morning to keep our heart free from offense. Offense is everywhere. Jesus said, "As long as you're here, offense will come". As long as we live in this world, someone's going to say something that we don't understand, something that hurts our feelings. Maybe your husband doesn't listen to your opinion. There's always going to be reasons to take up an offense, an opportunity to take it in.

You know, it's interesting because, you know, the people that you're around are one thing, but how about the people that you've never even met, and you know what I mean by that? Everybody's opinion can go public these days on social media. You begin to read somebody's opinion, you hear what they're railing against, it kind of flusters you. You think, "I don't agree with that. Why would they say that"? Then you begin getting all upset. You call your bother, and you call your sister, you call your neighbor, "Can you believe that they think that? Isn't that crazy"?

You see, you begin to get frustrated and upset, and spend energy on that offense, on those things that don't really even matter. You see, it's as if we're taking the bait. See, we cannot take the bait of offense and live in victory, joy, and peace. We got to let it go. We can't let it get on us. We can't swallow the bait. In fact, in the scripture, the word "Offense" comes from the Greek word that means bait. It was used to lure animals into a trap. See, the bait are the offense, was what got the animals to come on in and take the bait.

And sometimes, that's what happens to us with offense. It lures us right into a trap. We get caught up in this circle of offense, in this trap of offense. We get upset, we get frustrated, we get bitter because we've swallowed it hook, line, and sinker. So, we spend our time trying to figure out what somebody meant. That's a waste of our time. What in the world could be so important that we have to take our time to figure it all out? What in the world could someone say that would be that important to your destiny if it's offensive to you?

Now, you know what? We take up offense sometimes when no one really means anything, and that's a whole 'nother subject, but we're talking today about thinking twice about any offense, any offense. We got to recognize what's happening when we're frustrated and when we're going in the circle of offense, and we've got to learn to drop it and let it go. See, the quicker we let go of offense, the more free we're going to be.

The other day, I was cleaning a spot off of my carpet, so I went and got some carpet spot remover. I looked on the back to see what the instructions said about it, and it said get the spot off as quickly as you can. Why? Because the longer that spot's there, the harder it is to remove. And see, that's the same way with offense. If you have a stain of offense on your heart, the longer you allow it to be there, the harder it's going to take to get rid of it. See, but the sooner you let it go, the better off you'll be. Don't go hour by hour, day to day trying to figure it all out. It's not that important. If it's offended you, it's not that important.

Proverbs 19:11 says, "Good sense makes one slow to anger, and it is to one's glory to overlook an offense". Good sense makes one slow to anger, and it's to our glory to overlook an offense. You see, it's to our good. It does us no good to go around offended, allowing that to take root in our heart. See, if we'll get good at overlooking offense, we're going to live a more satisfied and happy life. Jesus was no stranger to offense. People were constantly trying to trap him into offense. It says in 2 Peter that they hurled insults at him. You know what he did? It says he entrusted himself to the one who judges justly.

He didn't entrust his life, he didn't give his life, his ways to some opinion, false accusations. He entrusted his life to the one who was in control of his life, the one who could judge justly. That's where he found his resolve. He found it by knowing other people's opinions, whether they mean it or not, don't have to affect him. You see, we're all going to have to learn how to let go of offense, and it is a process. We're all going to learn, the apostle Paul, in 2 Timothy 14:4, had to work at keeping offense off of him as well. He said, "Alexander the coppersmith did me a great wrong, but God will judge him. God will take care of what he's done".

You see, he gave it to God. He wasn't taking the responsibility on himself to be the judge and jury of everyone's opinion. He said, "I'm giving it to God. I have things to do. I can't walk around with an offended heart. I can't walk around with bitterness and anger, and expect to be everything God called me to be". See, we need to have that kind of attitude. We need to turn the situation around like Paul did, and turn it over to God. Offense will show up, it's just how are we going to handle that offense when it shows up? It's going to be there. I can tell you it's going to be there. As long as you live on this earth with people, it's going to be there.

Have you ever put, like, a bite of food in your mouth, maybe you're going to try something new, and it was like, "Eugh, I don't like the way it tastes", and you have to stop for a minute, and you're thinking, "What am I going to do? Am I going to spit it out, or am I going to swallow it"?, and you're thinking, you know, "What do I do? I mean, who am I with"? You're just thinking, right, a lot of this stuff. I have literally done that, and taken my napkin and went... "I know that's not very ladylike". But if there's something that's icky in your mouth and you don't want to swallow it, that's kind of what you need to do is spit it out.

In John 10, the scripture tells us that there were certain people in the crowds when Jesus would go places that wanted to capture him. They wanted to seize his life. They wanted to take him and stone him. There was certain people that were always trying to stir up trouble. But there's such an important thing that it says that Jesus did, and I've always kind of wondered what it said, and the other day when I read it, I thought, "Could this mean"? It says that Jesus would slip out of the crowd and go on his way.

And I thought about that just a minute. Here's some people in the crowd that were trying to seize him and trap him, but he, like, slipped away and moved on, and I thought about, you know what Jesus did? He wasn't playing Houdini. He wasn't being some magic man. He didn't give into their opinions. He didn't go try to defend himself. He didn't stir up strife. He didn't say, "Peter and John, why are they being so unfair? Will you go over there and talk to those people"? No, he ignored the opinions of others, and he moved on his way. He literally slipped through the fingers of offense and moved on.

You see, nobody captured Jesus' life. Nobody could capture him. Jesus gave his life. He made the decision to lay it down. He didn't allow anybody to change the course of his destiny by offense, by insults. He said, "No, I've got an assignment from God. I'm going to entrust my life to the one who judges justly". And can I tell you: you've got to slip through the fingers of offense if you're going to move on your way, if you're going to keep going to those places that God has you. Nothing is that important to waste your time. Listen, if offense can't upset you, offense can't control you, and if offense can't control you, you're going to be free to live a life of joy and victory. Shake off any offense. You have a decision to make today. Give it to God. Live happy, healthy, and whole, amen?