Victoria Osteen - How Are You Handling Worry? 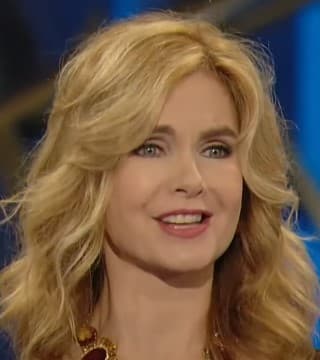 The other day I got a phone call and the voice on the other end of the phone said, "Victoria I gotta tell you something, but don't worry about what I'm gonna tell you". Well automatically my worry was kicked in, that was my first response. I thought, "oh my gosh, what do I have to worry about"? You see that's what happens sometimes our worry automatically kicks in without us even knowing it. We just worry when a concern or a care comes into our life. Now, this particular problem was not huge. It wasn't monumental, but it was a problem all the same. It was something that needed to be resolved.

So I had to push pause for a moment and make a decision: was I going to let this concern overtake me, cause my mind to just spin out of control, threat and worry until the problem has resolved itself? Was I gonna ruin my entire day, because of this concern? Or was I going to say, "God, you gotta help me with this situation. God, I've got to present this to you, you know everything about me, you said you'd fight my battles for me, now God, I am giving this to you and I'm gonna try to rest and hear everything you would want me to hear from you".

You see we have to make this choice. How are we going to handle this thing called worry? Are we going to just work it in our minds? You know sometimes when I worry it's like I'm really doing something. I'm just working, working, working it in my mind. I heard worry was a lot like sitting in a rocking chair. You're doing something, but it's getting you nowhere. We're just working it, and working it, and working it in our minds, and that's so unproductive. My question today is: how you handling worry? Because how we handle worry and stress it's gonna make all the difference in our life.

There's two sisters in the Bible named Mary and Martha. You can find their story in Luke. Mary and Martha, two sisters They had a brother, they were obviously from what the scholars say well-to-do people, so they have a lot going on in their life. They had money to manage. They had a home to manage. They had a lot of things happening. One day Jesus came to their home. He was going to stay with him. He was going to fellowship with them. I'm sure they were so excited. I'm sure that everybody in the town knew, "Hey, Jesus is coming over to my house", because this was a very important person. So I'm sure they were preparing, they were getting everything just perfect for Jesus.

Jesus came to their home, as they were fellowshipping and as they were enjoying Jesus, Jesus noticed something about Martha - she was buzzing around, she was working it, working it, working it, and he said to her "Martha, Martha, why are you so anxious and troubled about so many things"? You see he had observed Martha as they were in this home. He saw how she was handling all that to-do that was going on, but in contrast here's her sister Mary. Now, Mary would had as much responsibility as Martha did, but Mary said "I'm gonna take this opportunity, when all my busyness and all the concerns that I have to just linger here with Jesus, because he's at my house today. I want to sit at his feet. I'm gonna pour out my heart to him, so he can pour in his thoughts to me".

Now, let me just tell you this right now. He said, "There's one important thing. There's a better way". Now, he was very much aware of the legitimate concerns that these women had. The Bible says that Jesus said, "In this world you're going to have trouble. You're going to have hardship. You're going to have some things that come against you. Be of good cheer, I've already overcome the world". I guess, when you look at that scripture, you can say, "Easy for you to say, Jesus, you're God. I still have these troubles and these concerns". But this is what he was saying. He wasn't saying that you shouldn't take your responsibilities seriously. He wasn't saying that there weren't legitimately things to be done. He was saying, "There's one important thing, and it's the better way". What he was saying is, "All these concerns, all these crises, all these things that are coming against you, you need to come hang around at my feet. Linger in my presence because, see, that's the one important thing that's going to help you get through. That's the better way to handle worry and stress".

You see, I believe that Mary somehow figured out the better way, and she did it. It wasn't that she was lazy. It wasn't that she didn't care. Mary said, "Look, this is my chance right now to empty out the concerns and to put in all that God is". You see, that's the better way. Have you ever planned a birthday party or a holiday celebration at your house, or some gathering, and you were so stressed out that you made your own self miserable, and maybe some of your friends and family as well? There's a better way to handle the stresses of life. The word "Worry" comes from an old English word in the 1500s that meant "To strangle", "To strangle". I think that's an amazing interpretation of that word because worry and stress literally chokes the fun out of life. It literally pressures us in every relationship that we have. It steals our joy.

Think about it. Jesus was at Martha's house. She couldn't even enjoy the fact that Jesus was there. She missed the whole beauty of the moment. She couldn't calm down, relax, and be peaceful. She allowed the stress that was going on in her mind to strain the relationship with her own sister. See, it was an attitude that changed. Worry doesn't change anything but your personality. It changes your disposition. It doesn't make the situation better. Actually, it makes the situation worse.

I worked with a woman several years ago, and she had some legitimate concerns in her life, and I could see how it was affecting her entire life. Her son was in military and he had been deployed to another country. She was extremely concerned about his well-being and if he was going to make it and how things were going. She was so concerned and so worked up that I saw it begin to change her disposition, change her personality. She could hardly even function at work. And I said to her, I said, "Look, there's got to be a better way to handle this situation. I mean, he is there. There is not a thing that you can do about it. You've got to come to this place of peace and rest in the Lord".

So I began to pray with her, and then I began to make some suggestions. I said, "Look, you need to get some scriptures. You need to have them ready just as your warfare, when these thoughts start strangling your joy and your peace. You need to write out some declarations. When you feel that tension coming against you, you need to say, 'God, thank you that my son is in the palm of your hand. Thank you, father, that no weapon formed against him will prosper. Father, thank you your angels have charge over him, to keep him in all of his ways. He won't even dash his foot against the stone, but he'll tread upon the lion and the cobra, the young lion shall he trample underfoot. Thank you, father, you put a bloodline around him that the enemy cannot cross. Father, I thank you, Lord, that my son will come home safely'".

I began to see her put this into practice. Little by little, she began to take control over that worry, and I could see the strength come back. I could see her focus and her resolve come back. She began to praise God in the midst of her fear and her torment, and it made all the difference in her life. You see, worry pulls us away from God's power, but worship and praise draws us to him and it changes the situation. I have a good news to report. Six years serving in the military, and her son came home safely. He came home safely.

You see, worry's a weight. It weighs us down, causes us to not be productive. In fact, the Bible says, "Lay aside every weight that would so easily beset us, come on us". So you have to lay it aside because it says that "You have to run with purpose in every step", and when you are weighed down, you can't run.My sweet friend was so weighed down, she couldn't hardly get to work, much less run. You see, when she began to lay aside that weight, she was able to run out her purpose. See, her prayers, her intercession for her son was much more powerful than her worry. When she talked to him on the phone, she could say, "Son, I want to tell you, I'm praying for you. The angels of the Lord have charge over you. You walk out and you be bold with confidence. Know that God Almighty is looking after you". She could encourage him to pray for himself.

You see, when she began to lay aside the weight and run with purpose, she was way more effective. There's a technique that I use, and I've used it for years, and it works for me. You just got to find something that works for you, right? So when I have these concerns and these troubles, I imagine a big helium balloon, big beautiful balloon, red, red balloon, it's a power color, and I begin to put those troubles in that balloon, and I imagine myself holding that balloon by the string, holding it out in front of me with those troubles, and I look at that balloon and I let it go and I release it to God, and I say, "God, thank you that you're bigger than all these troubles. And that you said you'd perfect those things that concern me. So I'm going to give them to you. These troubles are just going to go right at your feet, Jesus. You're going to take care of them".

You see, sometimes I have to admit. Sometimes I have to let go of a whole bouquet of balloons. Do what you got to do. Do what you got to do to release the worry and the care because Jesus will sustain you when you release it to him. Listen, if you feel the pressure, the stranglehold of worry coming on you, even if it's automatic, push the pause button. Let's be like Mary. Let's take a lesson from this woman, and let's sit at his feet. Let's linger there for a while. Let's empty out the concerns so that we'll have room to receive his goodness, his thoughts toward us, his wisdom, his joy. Listen, weight is only going to weigh you down, but when you let it go to him, all things can be new again, amen?