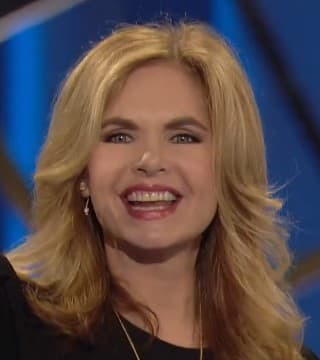 See, in Corinthians 3:13, it says: "There's three things that are eternal, three things that will remain: faith, hope, and love". Can I tell you today that God wants you to get your hopes up? He wants you to hope on in faith because God created this hope on the inside of us, and he doesn't want us to get vague with this hope. If God has spoken something to you, if you've found a promise that you believe that God has given you, I want to encourage you today to put hope in front of that promise. See, hope creates vision. Hope gives our faith something to attach itself to, something to go after. We need a picture of what we're going after.

The scripture says that "Faith is the substance of things hoped for". Do you have a picture in your mind of what you're hoping for? Are you feeding that picture? Are you fueling it so that your faith can move towards it? See, I believe God designed hope because he knows that hope fuels our faith. He knows that hope picks us up. The scripture says, "Hope anchors our soul". It anchors us in disappointing times, in challenging times, in times of failure. If we can only keep our hopes up, faith will pick us up and move us in the right direction. See, God does the work. Faith, hope, and love come from him. But you know what he wants us to do? He wants us to develop it. He's given us the potential, the seed for it.

Now, the promise that he spoke was this: "Abraham, you and Sarah are going to have a child, and through this child, the covenant child, your offspring will be many. You will have a large inheritance of children on the earth". Well, up to this point, Abraham and Sarah had no children between them. They'd been married a long time, and you know what? I think after you've been married so long and you hadn't had any children and you're really old, you're thinking, you're tempted to think, and I'm sure Abraham was tempted to think, and I'm sure he did think, "God, I haven't had one this far. Why and how am I going to have one now? I'm very old. My wife is way past child-bearing years". But God spoke that promise, and he said, "Look, Abraham, I want you to look up at the stars in the sky. I want you to see the sand on the seashore". He said, "If you can even count that, I want you to know that that is the number of your offspring. Can you even count that"?

See, he gave him a visual to build his hope around. I can only imagine him sitting out at night. He pulls up his lawn chair. He didn't have Netflix, didn't have, you know, the movie channel. So, he pulls up his chair and he's sitting under the stars, and he's remembering that promise, and, you know, he knows, he knows, he knows he's old. He knows he hasn't done it. So he's got a beautiful visual. "There's the stars God was talking to me about. He said if I can even count them. Man, I'm going to try to count them tonight. One, two, three, four... Wait, did I count that one? Three, four, five... Wait a minute, let me start over. One, two, three". What I'm saying is, night after night, he pondered those stars. He thought about those stars. He walked along the seashore, and as he kicked that sand and it got between his toes, he was like, "Wow, God, I'm holding on to this hope. This is my inheritance? This is my offspring? But God, okay, God, I'm just going to focus on the stars and the sand. I'm going to let that fuel my faith, and I'm not going to get stuck, God. I got things to do. I'm going to keep moving forward", and the Bible says this, that "Abraham hoped on in faith".

Now, how did he do that? I love this scripture. It says: "Because he believed that God had the power to do what he promised". He could hope on against all natural hope because he didn't put that hope in himself. He didn't look at his body, Sarah's body. He didn't look at the fact that he'd made some mistakes and tried to have this child, you know, help God out a little bit. Gosh, you know, that can really dash your hopes when you messed up. He wasn't looking at his mess ups. He was not considering his own limitations. He said, "I'm hoping and building this visual and keeping my eyes fixed on your power, God".

You see, it took the power and the focus off of him and put it where it belongs, on Almighty God. You see, so much, we look at our own abilities. We look at our own self. We look at the impossibilities, and many of them are impossible. Because, see, if God wants to do something in your life, it's going to be something that you can't do on your own. It is impossible. It's big, it's real big. You see, we have to anchor our self to hope. We have to feed this hope so it fuels our faith. Do you know, when God showed up and he told Abraham, "This time next year, you're going to have a child", because of his hope, because of the faith that he had continued to generate, he continued to move forward? Do you know that the Bible says this about Sarah? It says that "Sarah had the strength and the power to conceive because of her faith".

You might not want to conceive a child, but because of your hope and because of your faith, you can conceive the things that God wants you to bring forth in your life, and he wants you to do it through his strength, through his power. Take your eyes off of your own limitations, and get your eyes on God. Because if it's going to come to pass, it's going to come to pass because of God. He's the one that's going to bring it to pass. You see, God knew. God knew he had an appointed time. He knew that Abraham and Sarah would get disappointed, and go through difficulties, try to do things their own way. That's why he gave them the stars and the sand. It's interesting because those were things they could see every single day. They lived under the stars at night, and they walked through the sands during the day. It was an everyday visual.

Do you have any visuals? Do you have something that you can set up, that you see every single day to keep that promise alive in your heart, to create a vision so you can make it through the difficult times, so your faith knows where to go, knows where to be directed? You see, many of times, our hopes can be dashed. I think about Joseph. He had a dream, a God-given dream. His brothers dashed that dream. They tried to anyway. They sold him. Potiphar's wife, when he got to Egypt, falsely accused him. He got thrown in prison. "But I have this dream. But I have this dream". Took him 17 years. The baker, the cupbearer said, "I'll help you when I get out", he forgot him. I can't think of any more things that would really dash my dreams than that. Seventeen years, the scripture says. When he stood in front of his brothers, he remembered the dream.

See, he had built such a vision of hope that it got him through. His faith moved him forward. Hope is to move you forward. Hope so you won't get stuck. Don't get stuck. People say, "Oh, hope, hope disappoints. Don't get your hopes up. What if it doesn't happen"? The Bible says this: "Hope deferred makes the heart sick". "Hope deferred makes the heart sick". That means hope that's been let go of. You see, let me tell you something. If God's spoken something to you, and it keeps coming up, keeps coming up, and keeps coming up, that could definitely be a God promise, and you need to start getting visuals and putting that in front of your face every day, wherever you go, to hold onto that promise. Don't let that hope go. You don't want to ever live in regret, "Why did I let that hope go"?

My brother-in-law Kevin, and my sister-in-law Lisa, when they got married, they wanted to have a child like any young couple would. So they were all excited about creating a family. Well, as the years went on, nothing happened. Lisa went to the doctor, went through treatments, did everything that she could. Still, nothing happened. Five years went by, nothing happened. The doctors had said to her, "I'm sorry, Lisa, Kevin, you just need to give up hope. You know what? It's impossible".

Kevin got a sample pair of diapers in the mail, looked at those diapers, and he opened them up, and it was two diapers. Now, Kevin is a twin, and I don't know if, at that time, he had told Lisa that his desire was to have twins because, I mean, she was just doing her best trying to have one, right? But Kevin came to her and said, "Look what we got in the mail, Lisa. Let's put these things in front of our eyes because we are going to have babies". Everything that they did was incorporated with this dream and this hope of having children. They didn't lose their hope, but they kept feeding that hope, against all hope. The medical doctors told them, "No hope", but they kept feeding that hope.

One day, Lisa got a call from a friend. Her name is Nancy Alcorn. She has a girls' home. She said, "Lisa, have you had your kids yet"? Lisa said, "No, I haven't had them yet", and she said, "Well, Lisa, I have a young girl in here who has twin girls she's about to give birth to". She said, "I had this strong, strong desire that I'm supposed to call you and ask you if you would like to adopt these girls". Well, Lisa had never thought about adopting, but Lisa did keep her hope alive, and she fueled and fed that hope, and it fueled her faith. So, when the opportunity that God had for her took birth in her heart all of a sudden. She got off the phone. She told Kevin what had just happened. They were in agreement, and guess what? A month later, they picked up their twin girls. Take a look at these beautiful girls.

Now, I don't know, Catherine and Caroline, if you ever wore those sample diapers, but I do know that you got bathed in that sink, because I was there. Can I tell you, you could say, "Well, it didn't happen the way she thought it was going to happen"? Well, Lisa will tell you this. Those twins were birthed out of her heart. She couldn't ask for anything better. It was more than she could ask, think, or imagine. You see, God is a faithful God. He brings the promises to pass. He brings them to pass in his timing and in his way. But it's up to you and I to develop this hope, to create this visual, to fuel our faith. Because when God gets done with us, it's more than we can ask, think, or imagine. I encourage you, keep your hopes up because hope is from heaven, amen? Amen.