Victoria Osteen - Experience the Fullness of His Love 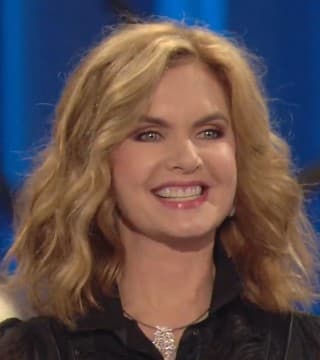 When Joel and I first started dating many years ago, we had a mutual friend, and I didn't know this at the time, but my friend was talking behind my back with Joel. She would say things like, "She likes you. She told me she did", and Joel would say, "Well, tell me what she said. What did she think about our first date"? He began to question her and she began to tell him, "Just keep doing what you're doing. She really likes you a lot". See, he began to hear how much I liked him at the very start of our relationship and so it gave him the confidence to pursue this relationship and as he began to pursue a relationship with me, he found out something very important. He found out that I liked him too, a lot.

So as we continued with our relationship, discovering things about one another, learning things about one another, and it began to grow, and it began to flourish, and 29 years later, it's still growing and it's still flourishing. You see, Joel went from hearing that I liked him to experiencing that I liked him. He went from hearing to literally knowing by my words and by my actions. And too often, we sit on the sidelines of life because we hear something is good, but we don't allow it to develop a confidence in us to pursue what is good, to pursue those things that we want. It's like that with the love of God. Your family, your friends, maybe you heard about Jesus when you were young.

But you know what? There's just some areas of your life you cannot pursue him. You've let him maybe a little bit, but there's areas that you think, "I don't want him to get to know me in that area. He may not like me anymore". You feel condemned. Sometimes, people think they need to clean themself up, they need to fix themself up nice and shiny before they can develop a relationship with Jesus. Well, they know that he loves them. They've heard it, but they've never taken the next step. Or maybe they have served God but like I said, there are those doors that they just won't open. And you know, when that happens, our relationship doesn't deepen and strengthen. We don't develop all that we can in the relationship.

Listen, if I shut some doors to Joel and wouldn't let him in, there would be some problems, but I had confidence that he wasn't going to judge me. He knew I wasn't judging him. We were in this together and we love each other and we developed it and that's what we have to believe about the love of Christ. God does not condemn you in Jesus Christ. He loves you in Jesus Christ. There is no door that you cannot open to him. There is no sin too great. There is nothing that you have done that he will not forgive you for. The Bible says, "When you were yet sinners, he came and gave his life for you". See, before ever even knew him, he already fell in love with us. Let's go from just hearing about the love of God to truly developing and experiencing the love of God. If you're sitting here today and you've got some condemnation or some shame, can I tell you that is not just Jesus? That is the accuser and Jesus is not the accuser.

There's a story in John 8 that exemplifies this so very well. Jesus was teaching one afternoon near the temple and the scribes and the pharisee (that's the religious leaders of that day) drag a woman to him in front of everybody and said, "Jesus, this woman was caught in the act of adultery". Now, in the law of Moses, it says that such an act and such a woman should be stoned to death. I'm sure that they came with stones in their hand and dragging that woman along. They stood her at Jesus' feet. I can only imagine the hush that came over the crowd because they said, "Jesus, what do you say about this"? The Bible says that he kneeled down.

Now, wait a minute. That woman is standing there. I can only imagine as she has her eyes glued to Jesus to see what the verdict is. When he began to kneel down, I can only imagine her heart beginning to flutter in her chest thinking, "Oh, no. What is he going to do? Is he going to pick up a rock? Is he going to start this execution right now"? Because, see, we read that story quickly. But when it's happening to you, it's happening in slow motion. You got time to think about it. Why else would he bend down if he wasn't going to pick up a rock? Can you imagine that going on in her mind? But the scripture says that he knelt down and he began to write in the dirt, then he stood up again, and he looked at those accusers, and he said, "Those of you without sin, you cast the first stone". He looked at them and then he knelt down again.

The scripture says that one by one, one by one, they began to walk off from the oldest to the youngest. You know, that's just like Jesus. He gives you time to think about it. He tells you something and then he gives you time to think about it. He stood up again, looked around. There was no one, just he and the woman. Can you imagine that woman standing there still trembling? She's standing there thinking, "What just happened"? You know, the law that they talked about was the law of Moses that was given to Moses by God and it was written on tablets of stone by God's own finger. It was written on mount Sinai. Jesus, when he knelt down, we don't know what he wrote. He didn't come to abolish the law.

The scripture tells us he came to fulfill the law and I find it quite interesting that the same law that was written by God's finger, he sent his son to write something else with his finger in the dirt, and that was mercy. We don't know what he wrote, but it had to have been mercy because he looked at that woman and said, "Where are your accusers? Is there anyone here condemning you"? She said, "No, sir", and he said, "I don't condemn you either". He said, "Go and sin no more". As she stood face to face with mercy, she went from hearing about Jesus... Everybody in the town knew about Jesus. They had heard something about him. She probably heard, yes, he performed some miracles. Yeah, he's a nice man. But she went that day from hearing about Jesus to experiencing the love of Jesus. She went from hearing to knowing this love, standing face to face with mercy.

Can you imagine that day? Her heart was opened was in such a way that when she walked off, she didn't walk off condemned. She walked off convinced this a man of love. This is a man that just touched me. I mean mercy opens the door of our heart for repentance. He told her, "Go back and sin no more. I'm empowering you and I am strengthening you by my mercy and my grace to stand against sin".

You see, grace does not give us a license to sin. Grace gives us the power to stand against sin, the power to say no to sin. That day, Jesus was in a very intimate place with that woman, a part of her life she would want no one to see. But everyone saw and they saw Jesus not pick up a rock but take his own finger and write mercy in the dirt. If you're here today, I want to tell you Jesus isn't condemning you. Rocks, they hurt. Jesus' love, it heals. Know today if anybody is throwing rocks at you, if there's condemnation in your mind because there's areas of your life you really don't want to expose to Jesus, know today that he is not going to condemn you. He wants to convince you that, yes, there is power to turn that thing around and go another way. He wants to strengthen you and give you the power you need to live the life he's called you to live. Amen? Amen.