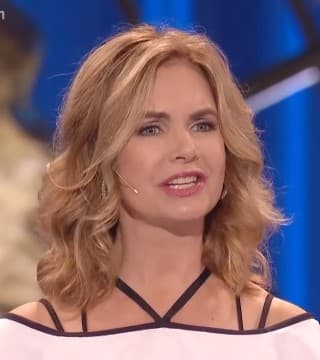 Thank you, Lord. We exalt you in this place, and we honor you today, amen? He's a good God. I was talking to a girl the other day who had had a break-up in her relationship, and she was so disheartened. She said that she thought this relationship was on the right track. She thought that it could even be headed towards marriage and then one day he came to her, and he said, "I'm taking a job in another state". Well, she was so discouraged. She thought, "What's happening"?

When she began to think about how he could leave so quickly it began to demoralize her. She thought, "Well, I'm not as special as I thought I was. I guess he didn't love me like I thought he loved me". She said, "I began to dwell on these thoughts, and I became more discouraged". She said, "You know, I was just really just trying to make sense of it all, trying to figure it all out. What happened? What did I do"? She said, "I got to the place where I didn't even want to go, hardly go to work. I certainly didn't want to go out with any friends. I found myself just staying at home a lot". She said, "One evening I turned on the television, and I saw your ministry".

She said, "Little by little", she said, "I'd get up in the morning, and I would look in the mirror", and she would say, "You are beautiful. You are talented. You are valuable". She said, "I began to have this fun person come back into my life, the person I really was". She said, "I got so excited, I got encouraged to get up in the morning and look at myself and tell myself how well I was doing". You see, I love that. She added this, and I can't leave this out. She said, "And I would say to myself, 'God is going to bring the right person across my path because I'm in the palm of his hand'".

I love the fact that she did something about her discouragement. She made a choice. She took what she received on the inside, the encouragement she got from the ministry, and she began to encourage herself. It says in Exodus 6 that when Moses was going to lead the children of Israel out of captivity, which God had promised would happen, when he went to them to tell them that this was their time, this was the moment that God was going to cause them to leave this burden of this yoke, this bondage that they had been under, the scripture says this. It says that they were too discouraged to believe. They had been under so much discouragement that they couldn't even believe what God could do for them.

You know, that's a sad statement, "Too discouraged to believe", but I'll tell you what it shows me. It shows me the power of discouragement in our life. It shows me that when we become discouraged we can't even get the faith to believe that God can take us to the places we need to go, to take us over a challenge, through an obstacle. You see, discouragement is heaped on us, and we can't see. You know, it's very interesting because the young girl that I talked about, when she began to encourage herself, when she began to take this encouragement that she had on the inside and encourage herself, you know, nothing had changed on the outside. That man didn't come back to her life, but everything had changed on the inside, and when hope rises in your heart, faith causes you to act. Faith causes you to move forward.

The scripture tells us that David, the mighty man of God who faced challenge after challenge, learned this secret. He encouraged himself in the Lord. You see, David had a warrior's mentality. He took this place inside of him that he had built up, this place where he had encouraged himself in the things of God, and he was able to take that war chest and encourage himself on the things on the outside. He was able to look at the face of discouragement and say, "No, my God can supply all of my needs. My God can get me through this".

See, I can't even imagine my husband trying to encourage me every time I'm discouraged. You know what? If I went to Joel every time that I was discouraged, he'd probably lock himself in a closet and not come out. You see, we've got to learn to encourage our self every day. We've got to remember what God has done in our life. We have to understand that we have to get in agreement with God. See, you are made in the image of Almighty God. God created you and he made you, and if you believe that about your life, then when you criticize yourself, you might as well be criticizing your Creator, the one who made you. You see, if you can criticize his creation, then what you're doing is criticizing the Creator, because he made you, he formed you, he fashioned you just the way you should be.

See, when you encourage yourself, what you're doing is you're saying, "Thank you, God, for who you made me to be. Thank you, God, that you've made me to be more than a conqueror in Christ Jesus, but I'm an overcomer because you back me up, because I have your word in me". See, it's so easy sometimes to see the good qualities in other people yet ignore the good qualities in our self. But I believe that we need to see the good things in our self, and we need to applaud even the smallest accomplishments. You know, maybe you feel like you're a procrastinator and there has been a project that you've been putting off. Well, when you begin to start that project, even if you don't finish it, applaud yourself. You know what? What about that diet you've been trying to stay on?

Listen, when you have a good day applaud yourself. What about the addiction that you're overcoming? When you see yourself trying, listen, crown your own efforts with the success. Applaud yourself. You see, we've got to learn to applaud even the smallest accomplishments in our life. When we applaud our self, you know what we are doing? We're not being boastful. We're not being egotistical and prideful. We're building confidence and faith in our self. Too often we see what we're doing wrong and not what we're doing right. We see all the times we blew it, but I want to tell you something. Don't go around looking at all the times you blew it. Applaud yourself for all the things you've done well. Buy yourself some flowers. Celebrate yourself. You've been made in the image of God. You got to understand when you celebrate yourself you're celebrating God on the inside of you.

See, it's so important that we do this. You know, life doesn't always turn out the way we planned, and maybe today you can say, "Well, not everything is going my way", but can I encourage you with this? You're still here. You're still full of purpose. You're still full of value. You can still get to where God wants you to be. You can't live negative and expect to have a positive life. You can't dwell on everything that you can't do and expect to go out with strength and courage to do it. You see, we're all in the process. That is the truth. Every one of us in here is in a certain area of our life in process to becoming, and it's up to us to stay encouraged along the way.

I'll never forget the time we were in another state, and my husband was on a book tour, and we had done an interview with this journalist, and I'll never forget he got in the car. We all piled in the car, and he sat there for a second. He said, "You know what? I did a good job". He said, "I did everything that I knew to do. I said what I knew to say", he said, "And I just feel good about what I did today. I did the very best that I could".

We had a friend with us, and a little later he said, "Joel, you know, when you affirmed yourself after that important interview", he said, "It reminded me of how negative I am towards my own self". He said, "I thought about what if that was me that just came out of that interview"? He said, "I would have probably had a mind full of doubt. I would have probably thought I didn't say the right thing and I didn't do the right thing, but when you had the boldness and the courage to affirm yourself", he said, "There was such a freedom for me. It made me realize that I can affirm myself".

Because, see, the truth is we can only do the best that we can do today, and if we'll do the best we can do today, whether it was the best or not, we'll be more equipped to do better tomorrow. You see, my husband is one of the greatest encouragers that I think I've ever seen. He's encouraged people all over the world, and I believe one of the greatest secrets to his encouragement is the fact that he knows how to encourage himself. He practices finding the best in himself.

See, when you're full of good things, it's interesting how you see through that lens of good things. Then you're able to see the best in others, to affirm and encourage other people. See, you can't give away what you don't have. If you've got a full tank, then you can give encouragement and love to one another. Listen, I believe I'm looking at people who have decided they're going to practice looking in the mirror and deciding who they really are. I believe I'm looking at people who are going to affirm themselves. They're going to watch the negative talk and the negative thoughts that are going on in their mind, and I believe that as we get up every day and we say who God says we are and we reflect the image of Almighty God, that we'll be able to go out and be encouragers everywhere we go, amen? Amen. He's an awesome God.