Victoria Osteen - Don't Be A Complainer 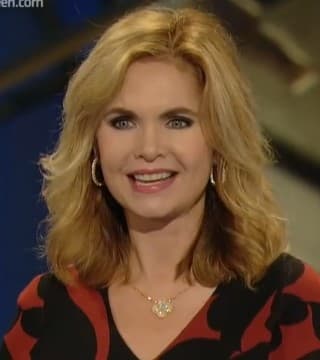 Why do we complain? That's one reason. It feels kinda good sometime, okay? Let's just get real about it. We've all thought, "All right, just get it off my chest and then I'll be okay". Or we think, or I think, "Sometimes if I complain, I can change the situation". I'll go to Joel and I'll tell him why this isn't right, and why we shouldn't do it this way. Because I think I'm going to change the situation, right? But you don't change a situation by complaining, by finding fault. You usually make the situation worse. Like I said, we can all think these thoughts of how we could do it better. But we've got to learn that we don't have to give life to these thoughts.

You see, when we give life to these negative thoughts, we create a more negative environment. We not only pollute ourself with this negative environment, but we pollute other people. We cause them to begin to think negative thoughts. It's as if it can spread if we're not careful. No one wants to be around a complainer. No one wants to be around a fault-finder. We don't either, so let's watch what we're saying. Even though it may feel good for a time, have we ever stopped, stepped back, and thought, "But is it doing us any good? Good"?

You see, I was reading this study, and I thought it was very interesting, and these researchers were talking about the brain and the effects on the brain when we complain, and it says that when we complain, we literally rewire our brain to complain. You see, our brain wants to take the path of least resistance. It wants to take the easy way out. So, it wants to repeat a pattern. So, when you complain, you learn to complain more. You're wiring in this negative pattern, and so, really what the researchers were saying is we're training our own brains to complain.

Now, the scripture is full of stories, and the scripture says that these stories are placed here so that we can learn, so that we can learn valuable lessons for our own life. So, I want to quickly take us back to the Israelites. When God brought them out of Egypt, he led them out by a man named Moses. We know this story. They were led out of captivity by a leader named Moses, and he did it by God's command. He was able to do it because God said, "I am taking my people to a land that is rich with milk and honey". He called it the Promised Land. Now, they had been quickly captive under the barbaric hand of Pharaoh. They had been mistreated, and God says, "Enough is enough. I'm taking my people out".

Now, if you've been mistreated, sometimes you come out with a victim mentality. But God wanted to reverse this victim mentality, so you know what he had the Egyptians do, Pharaoh and those people? He had them pour the wealth on the Israelites. So, when they left Egypt, they didn't leave with nothing. They left with gold, and silver, and cattle. They left well-equipped. They left with the mind-set of, "Oh wow, this is God, because only God could do that". They got to the Red Sea and God parted the Red Sea. They walked through on dry land. They were on their way to the Promised Land.

But as they got on their way, guess what? They started seeing some things that could be done better. They began to look at Moses and think, "Moses, really? I can do this better". They began to look at Aaron and question their leadership. They began to complain, and mumble, and grumble. You see, they began to complain about their food, and their water, and their enemies. But you know, it's really interesting. In Deuteronomy 1:2, this is what it says. It says when God was taking them to the Promised Land, he had already ordained to get them there. It was an 11-day journey. You see, they left with more than enough to get there in 11 days. But it took them 40 years, 40 years.

Was it Moses that stopped them? Was it their enemies that stopped them? Was it the fact that they didn't have the right food that stopped them? No. What they thought was their enemies, the things they were complaining about, the things that they were blaming and pointing the finger at, it wasn't their enemy at all. Their number one enemy was their own murmuring and complaining. Have you ever thought that your own murmuring and complaining could limit your thinking, could literally stop you from going to the next level? Have you ever thought how unhealthy it really is? See, I think if the Israelites could have read the research that I read, they would have said, "Oh my gosh, I'm training my own brain to complain", and that complaining is enemy number one, enemy number one.

I want to encourage us today, if we can train our brain to complain, we can train our brain to see God and how he can work in a situation. We can literally train our brain to believe that God can do something. You know, God is taking us all somewhere, and can I tell you right now you have everything you need right now to get to where God's taking you? If God is leading you, nothing can stop you. You see, that's where the Israelites missed it. They were looking at the things, the circumstances around them. They forgot to look to their God. It's easy to blame, it's easy to see out of these eyes, but we've got to begin to see out of our supernatural eyes the things unseen, the hand of God behind the scenes that is fighting our battles for us and keep our mouth closed until we get there.

You see, they complained about manna. Manna was the bread that came down from heaven that God provided for them every single day. Now, granted, they had this manna every single day. And they tired of the manna. Have you ever got tired of something? Every day, I go to work. Every day, I clean this house. Every day, I pick up my husband's socks. You see, they tired of this manna, so they began to grumble and complain about this manna, and it's so interesting that that just took fire in the whole camp, so they all started grumbling and complaining, and when you grumble and complain, you know what happens? Attitudes come up out of you that are not pleasing to God. In fact, grumbling and complaining can literally change our perspective.

They started thinking about the food they used to eat, the onions and the leeks and the garlic. They began to take their mind back to what they used to eat in captivity so much that that food became more important than their freedom. That food became more important than their freedom. Instead of going to that manna every day and saying, "God, I'm going to eat this until you change it, but I am grateful that I am free. I am grateful that you are taking me somewhere".

See, sometimes we all want something bigger. We want to go to the next level, but we don't want to do what it takes to get to that next level. "Yeah, I want a job promotion. I want this job promotion. Now, I don't want to work any extra hours. Man, if I could have a husband, my life would be complete. I am waiting for my man. I certainly don't want to cook for him, though". We want things, but we don't want what it takes to have those things, and this was their dilemma. They wanted out of captivity, God says, "I'm taking you somewhere", but they didn't want to face the trials until they got there.

Listen, if you don't like what's going on in your life, change is coming. Change is coming. Change is coming. But you're not going to find it by complaining and grumbling. You're going to find it by staying the course, by being grateful. See, complaining finds the worst in the situation, not the best. If you can train your mind to complain, you can train your mind to find the best. Listen to what it says in Philippians 2:14. This is kind of the antidote for seeing the negative and figuring out what to do with it. Because see, it's going to get in there, but what are you going to do with it? Don't give it life, don't spread it, don't ruin relationships, don't stop your destiny. Figure out what to do with it before you let it out, and this is what God is saying.

First of all, he's commanding us, "Do all things without grumbling, finding fault, and complaining". All right, so there's one thing I can recognize, I'm not supposed to let it out. What am I supposed to do with it, God? I mean, I'm only human, right? He says a little later in Philippians 4:5, he says, "Pray". Hey, if you've got a complaint, if you see something wrong, pray and ask God about it. Pray and ask God about it. That's what you do with it, and then it says, "With thanksgiving in your life".

Can you imagine if they would have said, "Lord, this manna is getting a little old. Do you think you could send some quail, God? Thank you, father, for this manna, though, and if you don't send some quail, I know you're getting me where I'm going. But God, I'm asking. I'm asking you for some quail". You see, if they would have sandwiched their request between thanksgiving, I think we'd be reading a different story about them. God would be teaching us a different lesson about them. Don't weaken your faith by your complaining. Strengthen it by your prayer, by your petitions to God, making your request known with thanksgiving in your heart. You see, what they did is they left what they had to chase after what they didn't have.

That's what complaining does. It doesn't say, "Hey, I'm grateful for what I have until I get more". It says, "You know what? I don't care what I have, I want more". Really, that's what complaining does, and the scripture says that when they thought they were complaining to Moses and Aaron, they were really complaining about God. Listen, I'm guilty of complaining. But you know what? I'm going to watch my complaining because I know it's right up there with worry. It isn't changing a thing. It's not doing a thing for me, for my life. It's only shrinking it, limiting it, and not getting me to where I need to be. Let's don't be fault finders and complainers. Let's be those who pray and petition God with thanksgiving in our heart, amen? Amen.