Victoria Osteen - Contentment Is A State Of Mind 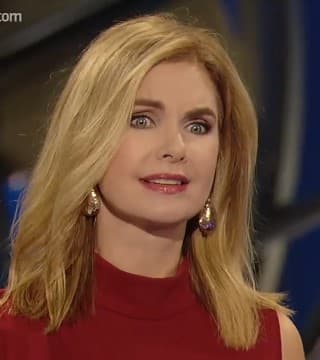 Hallelujah. We love you, Lord. It's good to be in the house of the Lord, isn't it? Have you ever felt restless? Maybe you felt anxious. You're just not content. You don't even know what it is. It's just something that's just stirring inside of you. You know, I think we all have been there. In fact, sometimes we don't even realize it's what it is, that we're not content. We just think there is something more, and we're looking for it. Maybe you're struggling to get that promotion. You're working hard at work. Man, you've got your eye on that promotion. Oh, you're just going for it. You're getting a little out of balance. You just don't feel satisfied, even though you're headed in the right direction. Or maybe you're at home, and you've got children, and they're in diapers, and you're thinking, "I'm exhausted. I need something else", and you begin looking for it.

You know, it's interesting because social media can be a great distraction. You can forget all your you're flipping through the pages, but you know what's interesting about that? It's fun, unless you're there for the wrong reasons, unless you're trying to escape your life to find someone else's life, to find meaning and purpose, because once that's over, you usually leave more discontent, you usually leave more sad than you came. I've experienced it. I've been looking at all these other people's great life, and I think, "Man, I'm missing out". I'm comparing their best life with my worst life. I'm comparing a moment in time with all my life. You see, don't run after something else looking for something to fill the space. Only Jesus can fill it. It doesn't matter if you're well-off, if you're successful. You've got to find contentment.

Because sometimes we think, "If this will happen, I'll be happy. When I get that promotion, when I get that new house, when I get a little more money, I'll be happy. I'll be successful". But can I tell you that line of success is always moving? It's always moving. If you're chasing success, you're never going to catch up with it because it's always moving. You can never have enough. Don't feel like, "Well, you know what? I'm going to suffer for Jesus. I'm stripping it all off. I'm giving it all away", because that's not going to fulfill you, either, because if you're trying to do something for Jesus out of show, it's not going to work for you. It's not going to work for you. If you're saying, "Jesus, look what I've done for you today", because, see, it's not what you're doing for Jesus, it's what Jesus has done for you. It's what Jesus has done for you.

See, the only thing that will fill these spaces is Jesus Christ, and when you're feeling anxious, restless, discontent, can I encourage us all, myself as well, with the words from the apostle Paul found in Philippians 4. He said this, he was writing, this is interesting because he was writing to the church at Philippi. He wasn't writing to unbelievers. He was writing to the church, and this is what he was saying, he says, "I know what it is to be in need", he said, "And I know what it is to have plenty. I've been without, and I've had more than enough". He says, "I have learned the secret of being content in every situation. I've learned the secret". Don't you know they were leaning in? "We all want to know the secret", secret to weight loss, secret to a happy life, secret to a better marriage. He said, "I've learned the secret to be content in every situation".

Can I tell you contentment will fix your situation? Contentment is a powerful state of being, and Paul "I have learned this and now I'm going to share it with you". He says, "This is the secret". He said, "I can do all things through Christ who strengthens me". I can do it all. I can make it my way through it all with Christ strengthens me. You see, his profound secret in what he had learned was the fact that it was Christ in him, the hope of glory. It was, "I can through him". I can through him. I can't apart from him. I'm a mess apart from him. I'm in prison apart from him, but with him the prison is not getting in me, because I'm full of Christ Jesus. I may be in a tough spot, I may be in a place I don't like, but you know what? I'm useful to the Kingdom of God.

I love Paul's writings because he was always saying, "Listen, you know, to die is to be with Christ. You know, if I go, that's great, but if I'm staying, I'm not letting the circumstances get in me. If I'm here on earth, I'm going to be in Christ Jesus. I'm going to walk with purpose and destiny", knowing that he doesn't waste one thing in my life. I am so grateful that Paul didn't give up in prison. I'm so grateful he didn't let prison take him captive, but he said, "I am in prison, but God is here with me, and as long as he's with me, I can do all things. I can bear all things, and I'm useful to the Kingdom of God". So, he shared with us the secret of contentment, which is powerful in our life.

Now, I don't know about you, but sometimes it takes me a little while to learn a lesson. I don't know how long it took Paul to learn this lesson, because he said he had to learn it. He said, "I had to learn this, and now that I have learned it and experienced it, guess what? I'm sharing it with you". He's saying this, though, "I can share the secret with you, but you got to dig into the mystery of it". You got to go after it yourself. You've got to experience it yourself. It's called maturity. He said, "I've actually come to that place that I've learned something". It's okay if it takes us a long time to learn. I can have somebody tell me something, I'm not kidding. They can tell me, I can hear something over and over again and then one day it makes sense. One day I actually get it. Paul was saying, "I'm giving you the secret. Go get it. Go get it". You see, when you're content, you're powerful.

To shed a little more light on this contentment, Paul tells us this in Philippians 4. He says, "Don't be anxious for anything". What is the opposite of content? Anxious, discontent, restless. Don't be those things. Here is the remedy. He says, "Don't be anxious for anything, but by prayer and petition, with thanksgiving in your heart, let your requests be made known to God, and the peace of God", the promise of peace, "Will guard your heart and mind in Christ Jesus". He's saying, "I'm in this prison, but can I tell you what's between me and these bars is peace. I'm going to embrace the place that I'm in, and I'm going to move forward". Now, he said this, he says, "I give thanks in all things". He didn't say, "I give thanks for all things". I really don't believe he was happy he was in prison. "Yay! I'm in prison. It is great. I'm shipwrecked, beat"...

No, these things happened to him. He was in those circumstances. He didn't give thanks to God for those circumstances. He gave thanks to God that God was with him in those circumstances, but there was an outcome. There was a promise: "I can through him". You see, sometimes we try to rush through those bad parts of life, those tough parts, those uncomfortable parts, and you know what? We're only human. It's not natural to want to be in pain and heartache, but you know what? Paul was trying to share with us your contentment does not have to come from your circumstance. How many of you, women in here, you're a mother, and you remember those diaper days, and it was just about exhausting to change another one of those diapers? But then, when you got past it, kids got into school, maybe they're married, you realize, "Those were precious days. They weren't as exhausting as I thought they were. I wouldn't mind having one more diaper to change".

Maybe you're a sophomore in college. You can't wait to graduate. "Well, I am on my way to graduation". You graduate, then you realize, "It was difficult, but really wasn't that bad. Kind of like it better than the real world". You see, contentment is not complacency. I just want to say that. Contentment is not complacency. You should be ambitious. You should want to succeed. You should want to have purpose for Christ Jesus. You should want to move forward. God put that in us. He told us, "Have dominion. Subdue your situations". It's not complacency, but the problem is if you can't enjoy where are you right now, and what you have right now, you're being cheated. That's not the best for your life. Don't be missing the now to get to the later. Don't miss the now to get to the later.

You know, even when it's tough, this is what Paul said, "It's tough in here, but I've developed, I've matured, and I've learned some things". No matter what you're going through right now there is a lesson in it. There is something to take from it. Listen, if you go through it and you don't learn through it, there is a problem. God wants to reveal his mysteries, his grace, his purpose in us. That's not a great subject, is it? Not fun to go through, but if you can learn through it, if you can come out the other side stronger, that old song, "If it didn't kill me, it made me stronger". That's what Paul said. "It's making me stronger". Hindsight's 20/20, but we don't want to live there, do we? We want to live in the future.