Victoria Osteen - Break Through The Barriers of the Past 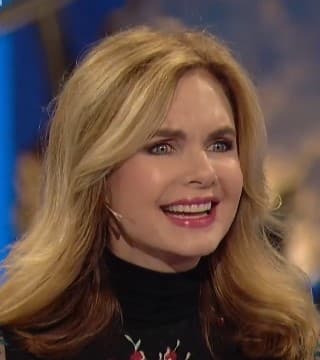 Hallelujah, and we love you so much. Thank you for being in the house of the Lord this morning. You may be seated. You guys not only sound good, but you look amazing. You look like champions. My friend had foot surgery, and the doctor told her that she would have to stay off of her foot for about a month. So, after a month of recovery, I saw her, and immediately, I wanted to know, "How is your foot"? She said to me, "I'm now going to physical therapy", and then she began to tell me a little bit about her physical therapy sessions, and she said to me, "When I first got to physical therapy, my therapist said this: 'does your foot hurt right now'"? And she stopped and said, "No, I'm not in any pain right now", and she said, "She looked right at me and said, 'if you're not in pain, why are you limping'"? It kind of took her aback for a minute, and she said, "Well, I'm trying to protect my foot. I don't want to hurt it again. I don't want to do anything that'll cause me any more pain".

I just want to encourage every one of us to not allow pain, hurts, discouragement to cause us to walk with an emotional limp. Pain comes to all of us. Discouragement is a part of life, but we have to understand that God is bigger than all of those things combined. You see, my friend didn't even recognize that she was walking with a limp. She had to have her therapist tell her. You see, what she had done is she had formed what the Bible calls, "A stronghold", in her mind, a wrong way of thinking. She was on the thinking pattern that she could never walk on her foot the way she used to, that it would always be less than, that this foot would always be weaker than the other foot. She had to understand that she could be strong again. Then she had to work through the process. She had to begin to believe. She had to begin to do the work. She had to begin to step out and watch things change.

You see, now she is well on her way to recovery because she made the choice to walk through that process and recognize she could be strong, and you know what? We all have to break those barriers of the past. We have to break those mindsets that says, "It'll never be good again. You'll never find another husband. The one you had left you". Those wounds, they hurt, they're real, but they're a lie. They're a lie. You've got to believe that you can be strong again. If you feel yourself shrinking back in fear, shrinking back because you've been hurt, afraid to try again, you can pretty much realize that is the enemy lying to you because God never decreases. He always increases. God is the God of increase. But it takes courage. It takes determination, and sometimes we need to check our self to make sure we're not walking with a limp. We need to make sure that that response wasn't out of pain, that response wasn't out of defense, that that response was out of strength, confidence, and love, so that we can keep walking this walk of faith. Listen, don't allow your past to define your future. It doesn't have to set the pace for your future.

A friend of mine was telling me about her young daughter-in-law, and how she had just found out that she was pregnant. The whole family was so excited. Her son was just thrilled. The young girl had wanted a child, so it was just the best news she could ever think of. As everyone was celebrating and all happy, it was only a short amount of time before she realized she miscarried the baby. You see, she was devastated. Her celebration turned into hurt and pain. She began to question God. She began to doubt herself. She began to think, "Am I ever going to have a baby? Maybe I'm not capable of having a baby". She told her husband, she said, "I don't want to try again". She said, "I don't want to go there. I'm afraid that I can't make it through another painful situation like that".

You see, she began limping. She began limping. She shrunk back. She didn't act like herself. She wasn't the lively, vibrant woman that she once was. It began to affect the entire family. You see, she was limping because of a pain that she had felt. It wasn't long after that, she found Sirius XM 128, and she began to listen to the messages of hope, of a faithful God, of a loving God, a God of strength, a God of purpose. Day after day, she listened to these messages, and it began to break down that wrong pattern of thinking. It began to build courage in her and determination. She began to think, "Can I do this again"? In fact, the defeat and the doubt turned into hope, faith, and victory.

My little nephew Christopher, he's a big old kid. I'm telling you, that boy is so big. He plays high school football, and when he started, he played the defense, and that's a really rough, tough spot to play, and when he would come home, the first couple of times, he'd realize the next day he'd have bruises on him, and he'd think, "Oh, man, these bruises". But he'd go back out there again. He'd come home. He'd say, "I got these bruises, but I did my best. I did good". The next day, he'd go back out there. He'd come home. He'd say, "I don't care about these bruises. We won, we won".

You see, he realized from experience that those bruises didn't have to stop him. Those bruises may be part of the game, but you know what? He's on the winning team, and I want you to know today, there may be bumps. There may be bruises. They come to all of us. But listen, you've got one more powerful on your side. You are on the right side of God, the winning side of God. You've got to say, "These bruises don't matter. They're not stopping me, because I am going to win. I'm going to come through. I'm going to break through the barriers that are trying to hold me down".

Do you know, God said, "I haven't given you a spirit of fear"? Every setback releases fear, every past hurt promotes fear. Fear is not of God. Everything that you won't do comes from fear. Every excuse you make comes from fear, fear of being taken advantage of, fear of being laughed at, fear of being hurt again. It's a root of fear, and God said, "I haven't given you fear". So when you feel fear, you've got to understand, that's the enemy trying to make you limp. He's trying to make you not reach the fullness of your destiny.

God said, "I've given you power". You've got the power of the Most High God on the inside of you. You go through the process. He said, "I've given you love". Can I tell you that his love broke the curse of sin and death, that his love is the one that breaks the chains? There's nothing greater that you can have than the love of Almighty God. He said, "I've given you a sound mind, a balanced mind, a mind that is able to discern truth from a lie, truth from a lie, fear from faith". Today, you have the power to discern fear and faith, and I believe that you're going to walk in faith. Sometimes we just need a reminder that we can be strong again. Listen, don't limp through this life, not when you can run through this life, not when you've got the force of the Most High behind you. You are on the winning team, amen? Amen.