Victoria Osteen - Be Mindful of the Words You Speak 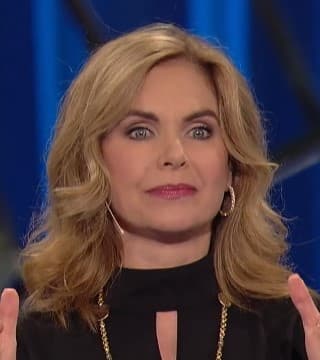 You know, the Bible talks about the tongue. It says it in James. It says the tongue is a very small part of the body. It says, but with one spark, just like a forest fire can begin, with one word, you can spark a forest fire in your own life. It also compares the tongue to a rudder of a big ship. Now, the rudder of a big ship is a very small part of the ship, and even though the winds come against that ship and the ship has to go through raging waters, do you know that whichever way the rudder turns, it can change the direction of that entire huge ship? It's all about the pilot and how he directs the rudder is where the ship goes. Can I encourage us to be the pilot of our tongues? Just speak words of faith, to release them in the atmosphere, so that our words will lead us and guide us to the place we want to go.

I was talking to a woman the other day, and she was talking about her beautiful daughter. She loves her daughter so much, but she was talking about her daughter having this job, and the job was not recognizing the talents that her daughter had. In fact, she was feeling like her daughter wasn't getting the breaks that she deserved, and there were other people, she felt, less talented than her daughter that were stepping up and getting all the good breaks, getting the opportunities, and it was just breaking her heart. She was so frustrated. She was going on and on, telling me how, if this doesn't change, this is what's going to happen. She's going to look up. She's going to pass her time to do what she wants to do. She began painting this picture of her daughter's life, and it was a picture of defeat.

I stood there, and I was depressed. I thought, "Oh, no, is this what's going to happen to her daughter?", and then I realized, "Oh, my gosh, this woman is convincing me. She's getting me upset and depressed", and I looked at her, and I said, "Is that what you want for your daughter?", and she said, "Of course that's not what I want for my daughter", and I said, "Then quit prophesying her future". She was allowing fear and those words to fuel this scenario of failure. Listen, if she was convincing me, what were those words going to do in her daughter's life? You see, we can either let our words of faith fuel our faith, or we can let fear fuel our defeat. See, it's up to us. We are the pilot behind our time. We can turn our life in the direction that we point, so I want to encourage us all today to release your words of faith.

Listen, the pressures of life are real, and it's in those times that we need to be aware of what we're speaking. The Psalmist David prayed this prayer in Psalm 141. He said, "Set a guard over my mouth, o Lord. Keep a watch over my lips". You see, David was in a very pressured situation. He was in a cave. The enemies were all around him. They were coming in on him. They were going to defeat him, and his prayer was this: "God, set a guard over my mouth. Keep watch over my lips". You see, in the pressure of life, he was very well aware of what he was saying. Listen, I hope this has as much a impact on you as it has on me because I realize, as David continued in that Psalm, he said, "Lord, I don't want to give in to their evils. I don't want to say what they're saying. I don't want to eat the delicacies of my lips. Keep me, father, keep me separated. Keep me looking up to you".

You know, sometimes you don't know what to say, so don't say anything. Just pray, pray, pray. Pray, "God, help me. Help me, God". You know, sometimes, when I don't know what to say and my mind is swirling, I just begin to praise. I just begin to thank him and praise him. The songs that we sing here every week, I begin to sing those songs. You see, I've learned them here. I've got them in my heart so they can come out of my mouth. We've got to praise our way to victory. We've got to release words of faith. We don't want to eat the fruit of our lips. We want to direct our life around the evil, through the storms, and straight to Jesus, straight to Jesus.

Do you see how those words led her to her miracle? Those words changed the course of her life. See, the interesting thing is that she not only had to fight through the crowd with those words, but she had to fight through the crowd in her mind, the crowded thoughts that were trying to tell her, "Just stay here. You've tried everything". The opinions of her family and friend that said, "I'm sorry, there's nothing we can do", "You're just going to have to die". You see, she had crowded thoughts in her mind, but because of her words of faith, she changed her thoughts. Do you know your words can reinforce your thoughts? If you are down and you're discouraged and you speak down and discouraged words, words like, "I'm never going to make it", "This is never going to change", do you know that it reinforces those thoughts? But when you begin to speak faith-filled words, you begin to get the Word of God in your mouth, and you begin to speak it, it will change your thoughts. It will line you up and set you in the right direction for your life.

Your words have life and death in them. Do you know God spoke to the darkness and the void of this world, and he brought light and life to this world. He spoke it into existence, just like that woman prophesied her life when she said, "If I can only touch him, I'll be healed". You see, she prophesied with her words. Jesus said, "My words are spirit, and they are life". I want to encourage every one of us to take the words of God, to take your faith-filled words and begin to declare your victory. You see, it doesn't matter about the winds that are coming against you. It doesn't matter the storms. You can pass through those storms and get on the course to victory. You can get on the course to your miracle today. Your words will lead you beside still waters. They will guide you in the paths of righteousness. They will set your feet upon a rock. Your words will direct you to the very garment of Jesus, amen? Amen.