Victoria Osteen - Be An Extravagant Giver 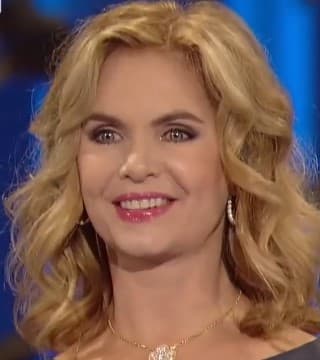 I just want to talk to you today about "Being an Extravagant Giver". You know, when you live a life of giving, you live the best possible life there is. Now, sometimes we think, "Well, I can't give all the time. If I give all the time, I won't have anything left". Or we think, "If someone asks me for something that I don't have, how do you expect me to give"? But can I tell you this today? That there is never a time that you are empty handed. You always have something to give.

In the book of Acts, Peter and Paul were walking to the temple to worship God. It was at that time of day where everyone came to worship at the temple. I can just imagine the crowd and everybody trying to get into the temple so they could all get a good seat, kind of like this morning, you know? You got out of your car. You were rushing here. You wanted to get your seat before someone took it. You were all busy, and so they came walking into the temple. They were passing the gates of the temple, and they passed a man who was sitting there begging.

Now, the Bible talks about this man, and this man had been crippled from birth, and the people that took care of him placed him at the gate every single day. Obviously, it was a good place to sit for spare change because he was there every day. I'm sure if it wasn't a good place, they would've moved him somewhere else, right? So he was there that day begging, believing that he was going to get what he needed for that day, have enough money to take care of himself and the people who helped him.

Well, this particular day, when Peter and John were walking past the gate, he hollered out to them and he said, "Hey, I need some money". He was begging from them, and I can see Peter and John. They're probably having a good time, a good day. It was a good day for them, and they kinda felt their pockets. Maybe they got their money bag and they realized, "I don't have any money", and, you know, it would've been easy for them to say, "Well, buddy, you know what? I'll catch you next time. You know, I don't have any money right now, but I'll catch you next time". Have you ever done that? Someone asked you for something you didn't have, and you think, "Wow"? Well, I have. Okay, I'll admit it, I have.

I was sitting at the light, parked in my car at an intersection, and I was just sitting there minding my own business when this man, I saw him walking to all the cars, and he was begging for money, and so I reached into my purse and I started looking for some spare money. I didn't see any money, no change. I began to look in my console, no money at all, and I saw him getting closer and closer to me, and I felt bad because, you know, you always want to give something to them. I didn't want to deny the man. So I grabbed my phone and I started talking on it. I was like, "Yeah, uh-huh, yeah", you know? And so, when he passed my car, he didn't even know I saw him. I didn't have what he was asking for so I just ignored it.

You see, I am so glad that day that Peter and John, because they didn't have money, they didn't ignore the man. See, Peter realized, "I always have something to give as long as I have the power of Most High living in me". He looked straight at that guy and he said, "Hey, buddy, silver and gold I don't have, but I do have something, and his name is Jesus", and he reached out his hand and he said, "Get on up and walk, buddy. You're healed, in the name of Jesus", and the Bible says that, "That guy jumped up, and there was a miracle that everyone saw that day". He began jumping and leaping and praising God.

Listen, Peter realized he was never empty handed. You may not have exactly what someone is asking you for, but do you have a hand to pick up your neighbor? Do you have an encouraging word to put someone on their feet? You know what I learned that day that I grabbed my phone, tried to ignore the fact that I didn't have what that man needed? I realized I do, I do have something. I have the name of Jesus, and next time I run into that situation, I'm praying, "God, thank you that you'll give that man supernatural opportunity, that, Father, he'll understand his value and his worth. God, I thank you that you're doing things he could never, ever, ever expect, that only you can do, Father. Bless him today, Father. Enrich his life".

You see, I have a prayer, and that prayer is powerful when you give it in love. When you put in the hands of Jesus, it has a ripple effect. It makes a difference on this earth. You see, that's extravagant giving. That's a person who knows that they're not lacking anything because they serve the Creator of the world. I may not have exactly what you need today, but I have something better. I have a prayer. I have a hand. I have a word. I have something I can do for you. Maybe it's just your time. Sometimes time can be more valuable than money. Hey, does your sister just need an encouraging word? Does she need you to just sit down for 5 minutes and help her out with a situation that she's going through? Maybe she just, she needs you to nod and say, "Yes, you can do it".

There was a young boy in the Bible. He packed his sack lunch one morning. He decided he was going to go see Jesus. He put five loaves of bread and two fish in it. He thought, "This should take care of me, at least for the afternoon when I get hungry. I had a good breakfast, but it'll take care of me this afternoon". So he was standing in the crowd, watching Jesus, and all of a sudden he got a tap on the shoulder, and this disciple came up to him and said, "Hey, young man, can I have your lunch? I see you got a lunch there". He said, "I've got to feed all these people", and I'm sure the boy was like, "I'm sorry, but this is not enough to feed all the people".

Can you imagine him scratching his head, thinking, "Where'd this guy come from"? You know? But the boy gave it anyway. The boy said, "Maybe I don't have enough, but let me just see what would happen", and that day, the disciples took that lunch and put it in the hands of Jesus. That little bit, it wasn't enough, but in the hands of Jesus, it fed 5,000 people that day. You may not have enough to meet the entire need. You may not have enough to solve the problem. But can you share your lunch? Can you give a little? Can you do what it takes to help a friend?

You know, when we give, no matter what it is, how great or how small, that giving serves and helps others. But do you know really what that giving does? It powerfully transforms the giver. Do you want to transform life? Do you want to live at your highest level? Do you want to see God do things, not only in your own life, but in the lives around you? Be that extravagant giver. Have that mentality of, "I'm never empty-handed. I've always got something to offer", and watch God take your little and make it into a lot, make it into much.