Victoria Osteen - A Great Leader Is A Good Servant 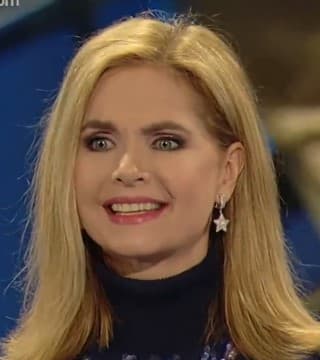 How many of you know that God has placed in our spirit a longing to achieve? You know, God told Abraham, he said, "Abraham, I want you to increase, I want you to multiply, and I want you to take dominion over your land, over what I've given you". You see, God doesn't find anything wrong with us achieving. He doesn't mind if we rise to a noble position or a good position from our hard work. But, see, God doesn't want us to think that that's what's gonna cause us to be great in life. That that's what's gonna bring us fulfillment and happiness. See, I truly believe God wants his people in strategic places, but he wants them to do it with the right heart. You see, sometimes we get caught up in the wrong things.

Jesus was walking with his disciples one day, and a mother came up to him of two of the disciples that were with him. And she said, "Jesus, I have a favor to ask you". She said, "Jesus, this is so important to me. I have two sons". And she said, "I wanna know if you will allow one of my sons to sit at you're right hand and the other son to sit at your left hand when you come into your kingdom"? Now, any good mother would try to work a deal like that, right? You can't blame her, huh? I mean, if you could pull that off, go for it. Well, when the other disciples heard that they got angry with the two disciples, because they were feeling like that, you know, they were tryin' to thort their authority was trying to put themselves over the other disciples. So they became angry and they became frustrated.

I can imagine them thinking, "Well, you haven't done anything better than me. I've done just as much as you have". You see, Jesus understood these emotions. He understood the struggle. And he told her, he said, "Look, you know what? If they can do what I can do", which they can't, he said, "But it's not my position, you know? I'm just doing what my father wants me to do. You know, he's the one that makes the decisions". So as they were walking, you know, I know Jesus was probably thinking about this, and he was probably thinking, "This is a good time to talk to them about this positioning, title, and authority".

And so he began to explain to them that the gentiles, which were not governed by the Jewish laws, that those leaders would use their authority to press the people down, would use their authority in the wrong way. And he wanted them to know that that wasn't the way they were to use their authority. In fact, he said to them, "Not so for you". He said, "Let me tell you what makes a great life. Let me tell you how to make yourself happy and successful". He said, "If you're going to be great in the Kingdom of God, you have to be a servant of all". See, he told his disciples the key to obtaining this great life.

Now, I wanna tell you he was not mad at her for wanting them to be in a high position. He just wanted her and his disciples to understand that it wasn't the authority, but it was the misuse of authority. "Well, you can have authority, but when you use it to serve others", he was saying, "That's what's gonna give you a great life". Now, you know, it's hard sometime to wrap our head around servanthood and a great life, servanthood and success. Because that's not what our culture tries to teach us. In fact, the two disciples coulda looked at their mother and said, "That's how we get authority. That's how we get position".

You know, have you ever seen people manipulate situations, do things to try to get more authority? And it's aggravating, isn't it? Well, they were aggravated at them, anyway. But we learn from people. We learn how to do things from society. And we think that's the way to obtain it. But, see, you don't obtain, in God's kingdom you don't obtain these things by stepping over other people, by using your authority wrong. You see, achievement and success is not greatness in the Kingdom of God. Jesus' concept of greatness and his ideas of greatness, he was trying to explain to his disciple, is service.

See, a good leader is a good servant. And he was saying to them, "Until you can serve, you'll never be a great leader. Until you can learn to serve, you'll never be a great leader". See, it is difficult sometimes. And what I love about Jesus is he was always giving examples with his own life about what he was trying to teach his disciples. You know, he never rebuked, and pointed his finger, and got mad at his disciples, and said, "You're outta here". But he was always letting his life be an example.

The disciples at the last supper with Jesus, Jesus overheard some of them disputing among themselves who was the greatest. Hadn't quite got that lesson yet. So Jesus did something very profound. Now, I know the theological impact of this is very great and there's many things that you can see in this example. But, today, I want to show you what Jesus was trying to show, once again, his disciples about greatness. So as they were sitting at the table, Jesus arose from the table and prepared himself to wash his disciples' feet. See, it was a way for him to show them that their position and authority was not below serving.

You see, he rose up and got down. See, he was the highest position. He was the highest authority, but yet he knew that service was the greatest thing in the Kingdom of God. And that was the message he wanted to leave with them before he left this earth. He wanted them to know a great leader is a great servant. Serving one another was not below their position and authority, but it was part of their position and authority. It's what made them great. See, God loves when you use your power to serve other people. Psalm 18:35, David said this of God: "You have stooped down to make me great".

See, that illustration, David was speaking out because God came down from heaven. He stooped down and became a man so that he could make us great. So that he could save us and that he could help us. He came from the highest place and stooped down to the lowest place to, basically, wash our feet. Jesus is saying, "A good leader, a great leader is a good servant". See, we should never place our position, where God has placed you, the authority he has given you, we should never place that position over the privilege of serving others. God has said, "It's a privilege to serve mankind".

I've seen people who use their authority the wrong way. They don't serve people with it. But God, he stooped down to serve us. I think we should look at our busy and important lives and develop this attitude of stooping down, of helping those around us, of taking up their hand. See, we're not only to serve our family, but we're to have an eye to observe who else we can help. Who else can we wash their feet? Who can we encourage? It may not be convenient. You may have to stop and get off of what you're doing to stoop down to serve someone. But can I tell you, that's what makes you great in the Kingdom of God? It's not your success here on earth, but it's the greatness that God wants to show you.

See, I believe that's why many people aren't happy. That's why many people aren't fulfilled, because they're thinking about themselves. They're thinking about their own dreams, their own desires, their own problems. They don't have time to think about anyone else. But can I tell you, when you start living on the outside and not always on the inside, what's going on with you, your life will change. You'll dramatically see yourself going places that you never thought before. You'll see fulfillment. You'll see joy. You'll see a new dimension in your life. See, we've gotta develop this attitude of service is greatness.

I was talking to a very wealthy man the other day. He was 75 years old, celebrating his birthday. Immensely wealthy. Not just a little. This guy was very wealthy and he began to tell me, he looked right at me and he said, "Victoria, can I tell you some of the greatest things in my life"? Well, I really wanted to hear, because this guy was really wealthy. So I's just gonna tune my ear to what he had to say. And he said, "The greatest things in my life as I look back, the things that have brought me the most joy, happiness, and fulfillment", I leaned in, he said, "Was that I was able to use my position. I was able to use my wealth. I was able to use the things that I had acquired to help other people".

I thought, maybe, he was gonna tell me about all his boats, his cars, and his vacation homes. But as I sat there and listened to him, I was so drawn in by the satisfaction, by this persuasive smile on his face. It drew me in to hear how he was able to use his company to sow seeds into people's lives. How he was able to not only sow seeds into people's life, but through those seeds their children were being blessed. I got so excited just listenin' to him. You see, that's what we want to see when we reflect back on our life. We wanna see a life of greatness, a life well lived.

See, God does not mind that you have success and position. He wants you in those strategic places because he wants you to make a difference in this world. He has appointed you, and he's anointed you, but he wants you to know that it's through service, it's through giving, it's through stooping down when it's not convenient and washing other peoples' feet, that that's what makes you great. See, anything done here on this earth, I wanna tell you, God'll make sure you receive it back. Be a person of good works. Stoop down. Let your life shine in greatness.