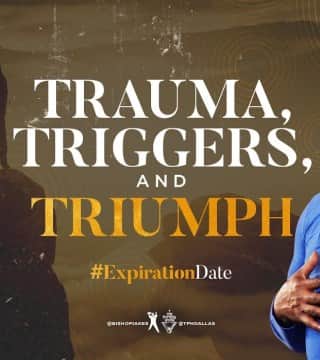 I want to talk to you about trauma, triggers, and triumph. "Trauma, Triggers, and Triumph". The word "trauma" is often used in hospitals to describe the severity of an injury. When a psychologist uses the word "trauma," it is to describe an event, or an incident, and the degree to which it has damaged the soul. Some of us are so busy trying to manage the expression of the trauma that we've never resolved the trauma, and then a trigger comes along. Triggers can be subtle and difficult to anticipate. The moment it triggers, zoom, it takes you right back. It could have been 20 years ago, but it takes you back. "They that live godly shall suffer trauma, persecution". You're gonna go through certain things, certain things are gonna happen and our faith is proven in how we recover. You can't have triumph without conflict. You can't be a winner if you're not in a fight. Sometimes triumph is just being here. Triumph just says, "I'm still here". Triumph says, "I made it".

The amazing power of this text is that God brought them right back out. They said, "When the Lord turned again our captivity, we were like them that dream". I preached about that last week. "Then was our mouth filled with laughter, and our heart with singing, they that sow in tears shall reap in joy". The celebration was they saw the end, not just a sowing but the reaping. They saw the conclusion of the whole matter. They got to go back to the land, to their place, to the birth. It is still, to this day, the most important thing to Jewish people, is the sustenance of the nation of Israel. They got to go back to Israel. They got to go back to Jerusalem, the city of peace, and there they celebrated God.

The only thing about this text that mesmerizes me, the amazing power of the text is that you have two different groups that converge on the same situation, having two different reactions to the same experience. They are two different groups only divided by age. They're all Hebrews, but it is interesting to note that they are having a completely different experience. The young men who had been born in Babylon and had nothing to remember shouted when they got back to Jerusalem. When they saw the rebuilding of the second temple, it looked like victory and triumph, but the old men wept. The old men wept. They cried.

How can two people have the same experience and have a totally different reaction to it? How can they have a completely different experience? Because they have been in the presence of the same event, but they react differently based on their perspective. The young men had been in Babylon all their lives. That was all they knew, was the way of life of being a captive in Babylon. They had adapted to their environment. They had gotten used to it, but the old men had sworn that, "If I forget Jerusalem, let my tongue cleave to the roof of my mouth".

So the old man endured Babylon by holding on to the memory, to the memory of being in Jerusalem. Now, you must understand, there's been a lot of stuff going on. King Hezekiah has lost control, nine of the tribes of Israel have been destroyed, not to be seen again. Then you see Judah, the remaining tribes, coming together, amassing and coming back king-less but not faithless, kingless but not faithless, templeless but not faithless, broke but not faithless. They lost their income, but they had not lost their faith. They had lost everything that pertained unto them. We're talking about about 722 BC. They've lost about every thing they had, but they came back rejoicing. They are the southern kingdom of Judah, and they are praising God. Now they are raising money to reconstruct Solomon's Temple.

Ezra and Hagai were sent as prophets to encourage them so that they could get finished, and when they got it all built up, oh, they started shouting and dancing. They started rejoicing. Marcus, give me some old Hebrew music, some good old Hebrew music. They started dancing and celebrating. We made it, we made it back, we made it back. We've come into our land and we've made it and we've overcome and we are here, this is it. We have arrived, we've got it, we made it, we've got it, we made it. Look at the temple. It's coming up. It's beautiful, it's wonderful, it's great. It's wonderful, but the old men said, "No! It's not what I expected. It is not what I remembered. That little shanty thing over there you call a temple is a mere shadow of what we had before".

I remember when my wife and I were dating and we went on our first date and she made me some banana pudding, and I said to her, "What is this"? And she said, Banana pudding, and I said, you know, to me, and to her it was banana pudding, it was made out of a box, you know? And it was vanilla wafers in there. It was good, it was good. It's what everybody does with the pudding in the box, but to me, I remembered it from scratch. So whether you like something or not or despise it depends on what you remember. What you, see, the old men's memory was triggered. It was triggered. When they looked at that, when they heard the songs was right, the song was right, play the music again, the song was right, We made it. We made it. We made it. they said, "That's the right sound, but look". The trigger threw them back to the trauma.

Oh, y'all don't hear what I'm saying. The trigger threw them back to the trauma. Stay with me 'cause I'm headed somewhere. The trigger threw them back to the trauma and they were reliving all the agony. Not only were they weeping for the lack of Solomon's Temple, everything they've been through came back up on them again, and that's what triggers do: it brings everything on you that you've ever been through, and the old men were crying as loud as a young man were dancing. And the Bible says, "You could not distinguish one from the other".

And number three, the cumulative effect of past trauma and current change. All of that brought them to weeping.

Oh, y'all don't hear what I'm saying. Number four, they shouted because at least this was better than where they came from. And so they both converged in this text but the trigger triggers a completely different response. I wanna preach this text today because the old men's weeping is a picture not only of the divide in this country but it is also a picture of the pain we mask. Of the trauma that they had suffered for 70 years explodes through the trigger of this one religious... these old men are not just crying about a temple. They're crying about all the trauma they have gone through over and over and over again only to come out to this.

I wanna talk to you. God sent me to talk to you. You call yourself being strong and being tough, but we have ingested a lot of trauma. We have ingested, our way of life has completely been disrupted. Our family gatherings have become perilous. To hug your grandchildren is to put your life at risk. This is not normal. Your sister comes over and you can't hug your own sister. It's traumatic. It's traumatic because we have lost hundreds of thousands of people dead, some of them we knew, others we knew of them, and how can you expect me to act like nothing happened when I'm running around looking like a bank robber every day with a mask up to my eyes?

My mother lived and died and never saw this mess. My grandmother lived and died and never saw this mess, and yet we are the generation that are found ourselves captive, captive by a virus, captive by the economy, captive by racism, captive by killings and shootings of our sons and our daughters, captive by plagues and distress, and because of the times we are in, the triggers are going off. Our relationships are collapsing. Marriages are falling apart. Ministries are folding because of the triggers of the times that we're living in while some are going into business, others are going out of business, trying to reinvent themselves, and you're trying to act like it didn't hurt. Of course it hurt.

I mean, a belly release, I don't mean just a nice Sunday morning service. God wants to ventilate the trauma that has attacked your soul. You've lost mothers and sisters and aunts and you're trying to smile and act like it didn't matter but God said, "Tell my people to open their mouth," and I know it sounds silly and I know it looks crazy, and I know it's unorthodox but you are at home anyway. Open your mouth and just shout out a good cry out to God... You can't go through this kind of stuff with your lips closed. You can't go through this and put on makeup and act like it didn't matter. You can't just keep getting your hair done and getting your nails done and act like you're okay. I said open your mouth and shout out a noise to God...

The reason the devil doesn't want you to say anything is that if you don't say anything, then God can't answer anything. God told Moses, "I've heard the cry of my people". There's something about crying out to God that gets God's attention. David said, "This poor man cried and the Lord heard him". The enemy wants to beat you and tell you to shut up, but the devil is a lie. There's power in my cry. I love the Lord because he heard my... I need 1.000 people that been to hell and back to open your mouth and just cry out to God out of your belly right now, right now, right now.