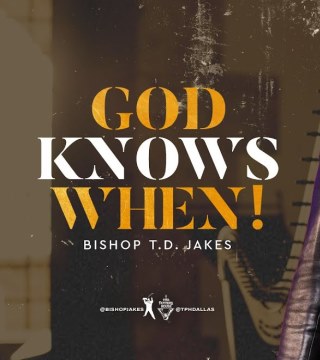 I wanna discuss an absolute conviction with you, just something that you can really sink your teeth into. "The Lord knows when". His knowledge and sense of timing has long been a discussion of theological worth. "That God knows" is where we get omniscience, God being all-knowing, knowing everything from the beginning to the end, that the Lord knows. It is comforting to say, "The Lord knows when," especially when I don't. It is important for us to understand "the Lord knows when" to rebuke the tendency to believe that our lives are chaotic. We turn on the television set every day and we don't know what in the world we're going to see. We don't know what's going to happen. We don't know what calamities we're gonna face.

There's a feeling of uncertainty. There's a pensiveness that's inherent in our spirits right now, sitting on the edge not knowing what's going to happen next. To know and to remind yourself that God is omniscient and that God has a plan and he has a schedule and he has a sequence and he has a structure gives comfort, whether he shares it with me or not. For God often knows things that he chooses not to share, like parents don't always share with their children and children don't always tell their parents. It is possible to have information and not espouse the information to you, but the Lord knows when. It's like children going on a ride, and they're in the back seat of the car and they keep saying to you, "Are we there yet"? Yet they are comfortable to ride in the car in the uncertainty of not knowing where they are in the journey. They are confident because they know that their father or their mother has the wheel.

I know how to live off of memories, and all they had as they were drug, shackled, and chained, bleeding and ostracized, and carried down, down from Sweet Jerusalem. O Jeru, Jerusalem, Jeru, the city of salem, peace. They had left the city of peace and gone into the plague of adversity, and not only did they leave, they did not leave up under their own auspices or on their own accord, but they were drug in chains by the Babylonians into captivity. Last glances looking back, they promise Jerusalem, "If I forget thee, let my tongue cleave to the roof of my mouth". There ought to be some things that you refuse to forget. And when they came down to near the river of Euphrates, and there they saw the willow trees, and they hung their harps on the willow trees and they wept. Jesus wept. All of us weep.

There are times you go through a season of mourning, a season of struggle. To be transparent, I've gone through seasons of weeping, not a few minutes or an hour, seasons of weeping, seasons of weeping. I can remember coming into the hospital room with my wife, going up on the elevator to see her mother, who was in the hospital, and her mother expired, and with my own two hands, I close Mother's eyes, and I watched my wife turn into a ghost and the room was filled with agony, and as our hearts were wracked with pain, we could not believe that somebody so strong, so vibrant, so tough, so full of life, so powerful. My mother-in-law was the kind of woman you either liked or you didn't, and she didn't care which one you chose.

How could she be gone? It was the first time that death had circled in in recent years so close and touched somebody that was a part of our lives, and my wife was devastated, and you know, If you know anything about losing anybody close to you, that's not the kind of thing can shake off in a week or a month. You don't shake that off in three months. That devastation continued and continued and continued, and I had to preach with it, and we had to go to church with it, and we had cameras in our faces with it, and just when it was starting to ease up a little bit, my mother took sick, and got worse and worse and worse and died with us holding on to her, gasped her last breath. She was gone, and I wondered, "How in the world could I be anointed, and used of you, and seen people healed in my services, and you not heal my mother"?

I remember preaching in this very church, going to the hospital wet, and laying my body on top of hers and praying for her, and she still died. My best friend in the world, we were closer than two peas in a tiny pod. She died. Before I could get over my mother-in-law, my mother died, and then my daughter came in the room and told me she was pregnant, and it was a season of weeping. Have you ever gone through a season of weeping, that before you could get out of this, here comes something else, and your heart is overwhelmed, and you smile in front of people as best you can, but you go home, "Please, please, let me go home so I can go back to being real, 'cause I'm tired of faking a smile," and I only told you I was doin' okay 'cause I knew there wasn't nothin' you could do about it anyway, and let me go back to my weeping, and we wept.

When we left off last week, the children of Israel were in a season of weeping and bleeding and suffering, and they'd hung their harps by the willow trees and they wept. They asked them to sing. How can you sing the Lord's song in a strange land? And people honestly want you to perform like you haven't been through what you've been through, but there is a degree of pain that comes so strong that you have to shut down everything. There's something this conference you can still function through, but there is a level of sorrow that is so grotesque and so obvious and so profound and so demonstrative that it will shut your time.

How can we sing the Lord's song in a strange land? They hung their hearts by the willow trees and all we could hear was nothing, nothing but weeping. There is a cry that engulfs the soul, that warms the spirit, that takes you to a place where you wonder, "Will I ever"? Y'all don't know what I'm talking about. I wish I could talk to somebody who was real with me, 'cause I get sick of church folks sometimes. Sometimes they'll catch you in your grief and in your season of pain, and they're in their season of progress, and they'll looked down and, "Child, if you just believe God, everything'll be all right. If you just walk in faith and claim"... Shut up! You're in spring; I'm in the winter. Shut up! You don't have no coat on 'cause it's not cold on your side of the world, but over here, we are in a season of weeping.

And all of a sudden, he began to turn everything around. Babylon was someplace that they thought would never be destroyed. Babylon was strong and fierce. Babylon was posted by the rivers of the Euphrates. It started out as a small port. It grew into a great empire. They were ruling and conquering and taking over, but they messed around and he took God's children down into bondage, and when God got sick of it, he brought it to an end and he stopped it, and Babylon is reaping what they sowed. "Fret not thyself over evildoers and how they prosper in their own way". Sooner or later, God will cause them to reap what they sowed. You might be outnumbered, they may have more money, they may have more contacts, but when God gets ready to bring you out, he will bring you out.

"When the Lord turned again our captivity, it was like a dream". These people hadn't been free in so long that free didn't seem normal. Have you ever been denied something so long that you got used to not having it? Have you ever been alone so long that you stop bein' lonely? Have you ever been in a crisis so long that it became your norm? "When the Lord turned again our captivity, it was like a dream," and the Holy Spirit told me to tell you you're gonna dream again. When I get through bringing you out, you're gonna be scared to believe it. It's gonna seem like it's somebody else. When I open up a door for you, it's gonna blow your mind. When I set you free, you're going to say, "Is that me"? I don't know what to think about it. Is this my house? Could this be my job? Could this be my husband? Is that my wife? You mean you would do that for me?

God said, "I'm gonna bless you till you're gonna have to pinch yourself". Oh, get ready to pinch yourself. God said, "I'll blow your mind. I'll cause you to prosper". The contracts will close. The property will sell. The door will open. The mountain will move. The yoke will be broken; the enemy defeated. When the Lord turned again. When he turned, when he turned, God got to turning. He did something in heaven, and it hit the earth realm. He did something in heaven, and God raised up somebody who didn't even know me to deliver me. "When the Lord turn again our captivity, we were like them that dream". It was hard to believe. "Then was our mouth filled with laughter and our tongue with singing".

Some of you have not had permission. You've been locked up. You've been shackled down. You've been bound. You've been held captive by a spirit of defeatism, but I break you loose and I give you permission right now. I break every bond over your spirit. Whereof we are glad. We are glad. Turn again our captivity as you did the streams in the south. Turn it absolutely around until I looked schizophrenic. Turn it around until they think I've lost my mind. Turn it around until the last time you saw me, I was laying down crying like this, and you thought I would never get back, and when you come back in the door, I'm laughing and dancing and shouting and praising. God will turn it around. He turned our captivity around.