TD Jakes - Bread of Heaven: The Most Holy Place 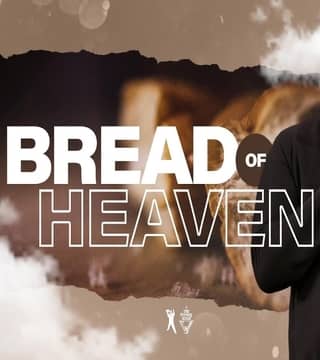 So the table had to be made, the table had to be made and it was made out of wood. According to Exodus 25:23-24, it was made out of wood. So all the carpenters got busy sanding and filing and shaping and spinning to make the wood. It's about three feet, not a big table, by one and a half feet, in a rectangular shape. It wasn't a big table 'cause it had to be carried. It's important that you understand that the bread had to be mobile. Yeah, and it is made out of what the King James Version calls shittim wood, which is really acacia. I didn't cuss, acacia... gotta add a little humor into it, makes it better, acacia wood. Acacia wood is a wood that grows in dry climates, that exists in desert places. It is strong, it is resilient, it it's tough; because there's little to feed it, it naturally has a propensity to withstand the elements. It is strong, it is resistant. It is tough, but it is wood and it can be cut and it can be shaped and it can be sanded, and before the table was gold, it was wood.

So it was made out of wood and then overlaid with gold. It'll get down to the good stuff now, this is the good stuff now, see, 'cause we're coming into covenant. We're coming into covenant, we're coming into the strange, paradoxial covenant relationship that is established in this table between the wood, a perishable substance. See, if the wood would've went through the fire the wood would have burned up, so you're taking a perishable substance and you're marrying it to a eternal substance. So the wood represents humanity and the gold represents divinity. Oh, we're gonna dress this table out in a minute, and the wood would've perished but it was covered, yeah, by the gold. And this table, this table, this table of wood and gold, this table that was wood and gold, this table that was humanity and divinity is made to be mobile, is made to move, is made to move. This wood and gold, this human and divine, this man and God, this God-man, this God-man is made to move. "And the Word was made flesh, and dwelt among us, and we beheld the wonder of his glory". Are you hearing what I'm saying?

We're at the Table of Shewbread, we got bread moving. Somebody holler, the bread is moving. It is stacked on the table, 12 loaves of bread, 12 round loaves of bread to represent the 12 tribes of Israel. Are you hearing what I'm saying? To represent the 12 tribes. There we are, that's the picture I want, that one right there. It's stacked up there. God gave specifications on how everything was to be made, even the crown around the table has symbolic value and worth, "Crowned with honor and glory," it has power. The artifacts were preserved, the plates, the cups, everything. Oh, look at that. Bless my soul, don't that look like a Communion Table set-up getting ready to be served? So it is not so much that God is giving us new ideas, it's that God is unveiling.

Now, the provision of God was so strong that when the children of Israel were going through the wilderness and they ate manna, the provision was so strong that it protected their clothes from wearing out. They went through the wilderness, 40 years in the wilderness without a new dress, 40 years and never needed a new pair of shoes. I'm gonna say it again. 40 years walking in the wilderness and the soles of their shoes never wore out. I want to talk to somebody that God is sustaining. It might not look like you're getting ahead, but you ain't going down either. You might not have got out but you never went under. I wish I had a witness.

Won't God keep you in your wilderness, making a way out of no way, opening doors for you? Glory to God. Slap somebody and say, that was God kept my car running, raggedy as it was, that was God kept my coat together when I couldn't buy a coat, that was God held my hands together when I was about to break down. That was God. Touch your neighbor and say, look at me, I don't look like what I've been through. If I told you what I've been through it would blow your mind, if I told you about the hell I had to face, if I told you about my wilderness you wouldn't even believe it. Look at me. Touch somebody say, I'm still here.

These folks in the wilderness, they don't have no dough maker, and here's the criteria. The bread is to be presented before God, and the criteria in the recipe; now I cook, how many people cook in the room? The criteria in the recipe is not just that it might be flour, but it must be fine flour. In order to be in here it has to be flour that has been pulverized, totally crushed. There's a difference between all-purpose flour and cake flour, cake flour is finer. If you know anything about cooking you know what I'm talking about. It weighs out different. God says make this bread from fine flour. This bread represents the 12 tribes of Israel, this bread represents people. God says, I will make bread out of you after you've crushed. You're not bread because you won a title, you're not bread because you won a position, you become bread through the crushings. You understand what I'm saying?

Now you can go online and get you some credentials and call yourself a minister, but what you call yourself don't make yourself. Just 'cause I call myself a car don't make me a Cadillac. God says in order to get in, this bread must be made of fine flour. So when God is getting ready to make you bread. I don't know who you are but I'm enjoying you enjoying the Word, he having a better time than I am over there. Crushing you, shattering you, breaking down your pride, breaking down your stubborn will, bringing you down to ashes, making you humble yourself, making you say yes to his will and yes to his Word and yes to his way. This is fine flour.

I don't understand how you can be so judgmental and self-righteous and you have forgotten yourself. That's why you need to be beat some more, 'cause you're still hateful and judgmental and self-righteous. But when God gets through beating your behind your give mercy 'cause you got mercy. I would rather get to heaven and hear God say, "You was too merciful," than to get to heaven and hear God say, "You was too judgmental," 'cause I don't have a right to be judgmental, I did too much myself. God is beating us to fine flour. Now that's who's spiritual, that's who's spiritual. People who have been beaten to fine flour can be trusted to make judgments 'cause they consider themselves. "Hear ye the Word of the Lord". I have not taking you through this test to destroy you, I have taken you through this test to refine you. Many shall come and eat from your wisdom because of the crushing I allowed you to suffer.

"Hear ye the word of the Lord". Despise me no longer, "Put away your bitterness toward me". It is true, I have beaten you, but I beat you to make you bread. I will draw people to you that I could not draw before because I could not trust you. But because you are now fine flour, I will draw people into your life for you to feed and not need. I feel the glory of God. There are many of you in here who have endured the chastening of the Lord, and God has set you on a path to make you bread. You are not in that office for the pain, you are there for bread. And God says I will send you into places and give you opportunities because I have prepared a table, and I have laid you on the table as bread.

So this is what I want you to see and I'm going to stop. The thing that amazes me is that it is not just God presenting bread to us, it is that we present ourselves to him; I present myself a living sacrifice. So the first thing I want you to understand is you're on the table. You're on the table of the Lord, and every crushing and every breaking in your life made you eligible to be meat for the master's use. There was never to be a time that the table was to be without bread. The bread was laid up before God all week and changed out on the Sabbath, and on the Sabbath, in the incense of prayer, the bread was exchange and the priests ate the bread in the Most Holy place, but the table was kept with bread on even when it was moving. You better believe it. The table was never to be without bread. Lord, don't let my table ever be without bread.