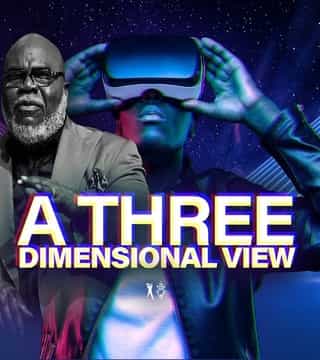 That's why we're looking at this text tonight, because this text admits flamboyantly that the writer of this epistle, after all of this worrying about comfort and all of this worrying about ministering to other people, he now comes down and says, "I myself, when I went through Asia, was pressed". He said, "I couldn't even calculate or quantify what it felt like to be me". Is there somebody watching me right now who's goin' through something, and part of the pain of what you're going through it's feeling like nobody knows what it's like to be you? There is no measurement, there is no ability to quantify the amount of stress you're under. I'm so glad you're tuned into this Bible class. I'm so glad you're watching me right now, 'cause I have a word for you.

There is a pressure that is above measure, that you cannot calculate, that makes you feel like you're gonna explode, that makes you feel like you cannot survive, that makes you despair of life itself. And that pressure doesn't just come to sinners, and it doesn't just come to people who don't know the Word, and it doesn't just come to people who are living ungodly. Paul, an apostle of Jesus Christ, by the will of God is writing, and in spite of him being an apostle, in spite of the fact he was chosen, in spite of the fact that he is responsible for writing more epistles in any other person in the New Testament, says, "I was discouraged. I was at my wit's end. I know that Jesus appeared to me on the Road to Damascus, knocked me off the horse. I had amazing testimony, great encounter. I won all kinda souls for Jesus". He said, "But when I went through this period in my life, I was discouraged. I was pressed above measure". And then he goes on, let me see, I want to read it, 'cause I could quote it but I don't want to miss anything.

Okay, "Have you ignorant of our trouble which came to us in Asia, that we were pressed out of measure and above strength". Now, it's one thing to be pressed above measure. We can't quantify the pressure. He said, "But the pressure was also beyond my strength. This was too much for me". I want to talk about too much. It's not always allocated according to your strength. Sometimes your pressure exceeds your ability. If it didn't, why would you need God? That I can't handle it, that breaking point, that tipping point, that edge, somebody's at that point right now. You're watching me right now and you're saying, "My God, it feels like he's talking right to me". I am. I'm talking right to you right now. And you say, "I can't handle that". I know. I get it. "It's beyond my strength. I can't. This is too much for me". Why do you think he said, "Cast all your cares on me because I care for you"? He said, "You gotta cast it on me 'cause you can't handle it".

Watch this. The apostle is saying, "It was beyond my strength. It hit me so hard I didn't have an answer. I could not handle it". So stop beating yourself up because you can't handle it, beating yourself up because you don't have an answer, and most importantly, beating yourself up because you can't fix it. There are some problems you cannot fix. There are some mountains you cannot move. Oh, this is not popular. There are some things that happen in your life that all you can do is tuck your head down and go through it the best way you can because it's too much for you to bear. The writer here says, "I could not handle it. It was too much for me. It was above", it was, "I was pressed out of measure, above strength". Here's the shocking part, "In so much that I despaired of life itself. I was so pressured I wanted to die".

Now, listen, friend. If the gentlemen who's writing the Scripture says, "I know what it is to be pressured so bad that I wanted to die," then the rest of us jokers who are reading the Scriptures, surely we have gone through some moment, whether you talk about it or not, or tell anybody about it or not, or admit to it or not. I know it'll mess up your resume. I know you want everybody think you're Superman that you don't have a Clark Kent, but there are moments in your life that your cape doesn't fit anymore, and your boots hurt your feet, and you have to admit, "I am not Superman. This is too much for me. I cannot handle this. I'm pressed above measure. I can't even articulate, or count, or explain to anybody how bad this is and it is beyond my strength".

And how do you know it's beyond your strength? Because now I'm despairing of life. That means the pressure on the outside has gotten so on the inside that the Apostle Paul... we're not talkin' about Snidely Whiplash here. This is the Apostle Paul, he's writing the New Testament and he is admitting that, "I went through somethin' comin' out of Asia that made me want to die". The hardest thing in the world for a Christian is to admit that they felt like that, because we feel like we make God look bad if we went through a period in our lives of forlornment. We don't want anybody to know it, so when people ask you how you're doing, "I'm blessed in the Lord. Thank God in you".

You know, we got all of those Christian colloquialisms. "Oh child, I'm blessed and highly favored. Glory to God, hallelujah". And we're goin' down the road because we know what we're supposed to say, but I'm talkin' about when how you feel doesn't line up with what you are supposed to say. There are moments in your life that you cannot really tell people how you really feel because they couldn't handle it. They see you as invincible. You're super mom. You're super mama. You're super daddy. You always got it together. We always call on you. You're the Wonder Woman of our family. You are the Hulk of our house. We're always calling, and they don't know that even the Hulk gets tired. Don't call me 'cause I'm right at the edge. And Paul says, "I despaired of life itself".

Have you ever had someone hurt you so bad you wanted to die? That's the question. I'm asking you, have you ever had someone hurt you so bad that you wanted to die? With your saved, Holy Ghost-filled, talkin' in tongues, got it goin' on in Jesus's name self. And secretly, you went through something. And I think that the secrecy is worse than the thing itself. We have something goin' on with us as a people and a culture that we don't like to talk about things that overwhelm us. So we want to act like we got it all together all the time, and yet we've got mental health issues out of control, suicides are breaking out, particularly amongst African American children in epidemic rates. And as long as we get our dance in on Sunday, we think everything's okay. This is not about you getting your dance in. This is not about Reverend Flip Flap, hooped at the end of the message, change keys 12 times. He can change keys 100 times and you still wanna die. You can dance all over the church and get in the car, and that same spirit will be waiting on you in the car. It'll follow you back to the house and you go home in agony. And the worst part is you can't even tell anybody.

There are three things that he teaches us in the 10th verse about God. I'm going to give you these three things and I'll be gone. It's a three-dimensional understanding, 3D understanding of God that he doesn't drop on us 'til the 10th verse, but it is powerful, and you need to know it and you need to understand it. It is a three-dimensional comprehensive understanding of the delivering power of God, hallelujah. Shout, "He will deliver me". Glory to God, you're absolutely right. Shout, "He hath delivered me". Shout, "He will deliver me". You're right on both hands. Both of those things are two different things working at the same time. He hath delivered me. He is delivering me. He shall deliver me.

That's what it means to be washed in the blood of the Lamb. He hath delivered me. And then he goes on on the premise of understanding that I have been delivered, so you can't get out of that first grade, that first grade teaching that I have been delivered. If you're not settled on that, you're not ready to graduate to the next class. So you gotta understand I have been delivered. That's over. That's settled. That's finished. That's done. That's complete. That's over. It's mine. I have possessed it. It is a reality. I am saved, hallelujah. I'm saved. From the crown of my head to the soles of my feet, I am saved. Not because of what I did, but because of what Jesus did, I am saved. I am a recipient. I'm an heir of salvation. This is my story. This is my song. Praising my Savior all the day long. Are you with me? I said, are you with me? Ain't no need in sitting here if you ain't gonna be with me. I said, are you with me?

That's why he gave me the Holy Spirit to work in this present world to continue the deliverance process in my conditions. The Holy Spirit doesn't have to continue to work on my position. When Christ said, "Tetelestai, it is finished," that settled my position. The Holy Spirit came to deliver my conditions so that there is equity between my conditions and my position. Okay, are you following what I'm saying? So he doth deliver. He hath delivered. He doth deliver. He is delivering. So right now, I am being delivered. I have been delivered. I am being delivered. Let me stay there just a minute or two. The progressive regeneration of the soul is an ongoing process. So even though I have been redeemed positionally and I am still being redeemed conditionally, my conditions don't always reflect my position. That is a progressive, ongoing relationship that continues to exist between me and Jesus. Am I teaching good? Are you getting anything out of this?

That's what it is to be caught up to meet the Lord. That's what it is to be absent in the body and be present with the Lord. That's what happened to your grandmother. That's what happened to your mother. That's what happened to your grandfather. They were delivered from the presence of sin, hallelujah, caught up to meet him. Oh, hallelujah. Oh my God, I felt that down in my soul. He delivered me from the presence of sin. That is the blessed hope of the church. Three dimensions. So tonight, you can say, "I went through a three-dimensional Bible class. I learned a three-dimensional way to attack the enemy that's been attacking me. I learned the three-dimensional understanding of how to overcome the pressure that's trying to come over me". But right now, what I want you to understand is how God is doing a present work in your life right now. And the God we serve is able.