TD Jakes - We Are All in the Same Boat 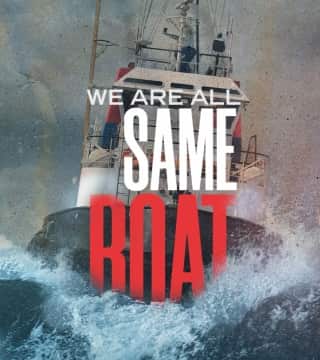 Paul says, I know both how to be abased and I know how to abound, everywhere and in all things. I am instructed. Oh, God. I am instructed, both to abound, we do good teaching that part, but I'm also instructed to suffer, need, loneliness, frustration, turmoil, aggravation. The same God that orders blessings, he instructs me to suffer. And because we don't teach this, we have a church in shock. We have a church in shock, because we told you, if you got saved you'd have a Mercedes in a month, all your kids would graduate, you'd be happily married the rest of your life, everything would fall in place and your back would never hurt. And now all hell is breaking loose, and you're shocked. But I am instructed both to be full and I am instructed to be hungry.

If it takes this to get to the other side, I can do it. If I have to go through lightning to get to my destiny, I can do it. To make peace with the process is contentment in the program that God has designed for my life. If we are to maintain, then, our aspirations and be effective, we must do it without developing frustration. Some of you have aspiration, but you're cancelling it out with frustration. We must avoid the temptation to be defined by our current status, whether it is positive or negative, it simply doesn't define me. I will not be defined by what's going on around me, storm or not, wind or not, good or bad. I learned not to get drunk off of success, because if you get drunk off of success, you get drugged by failure.

If you got COVID in a trailer park and you can't breathe, it don't make it better if you're in a mansion with goose down pillows, if you can't breathe. Pain is pain. One person asleep on an old foam pillow, and all the foam has become so weakened that it's almost flat, but if you can't breathe, it don't matter where you lay your head. One person's got nurses and attendants and maids, another one's got the grandma shovelin' food through the window of a trailer, but if you got COVID it don't matter the circumstances. Stop hating on people. Life is just, we are all in the same boat. The battle, the common human struggle. You think, Lord, if you would have made me differently, I wouldn't have the pain I got now. Yes you would. The circumstances might be different, but you would have pain.

Mark doesn't mention Peter, because it's not God's will for you to run from the fight and leave everybody else struggling. It's not that God told him to get off the boat, he asked to get off the boat. Some of y'all keep jumping off of boats every time the storm rises, you want to walk away. When are you gonna grow up and sit your hips down and wrestle with divorce and fight your way to the other side? Holler at somebody and tell 'em, I'm through running. I'm through running. I'm gonna stay right here on this boat, rocking and reeling and pulling and towing, 'til I get what God wants me to have. Who says that Peter was right to run? There is no Scripture in the Bible that applauds him for running. And when Jesus saves him, he only had to save him because he got out of the boat. Oh, y'all ain't gonna talk to me this morning.

Have you fought hard enough? Have you resisted under blood? One final thing. He doesn't mention Peter, he only talks about the boat, he only talks about the battle. And then, at the last moment, he brings up the bread. And now I understand it! I never understood why Jesus told them to gather up the fragments. We don't hear where they ever used them. We don't hear where they ever ate them. We only hear that the fragments were on the boat. And it is this gospel writer that makes us understand why. The fragments were on the boat to remind them of what God had done before in their life. And the Bible said that they forgot the loaves because of the hardness of their heart. The loaves were there to remind them of what God had done in the past. And Jesus said, take the scraps with ya. I'd never could, because my mind draws pictures, I never could figure out, who wants to eat this stuff? These leftover scraps in baskets where everybody been eating off 'em and throwin' it away did not sound appetizing to me.

So I thought, maybe I'm frivolous, but it seemed like to me, you know, Jesus, if I'm going to work for you for three years, you could give me something fresh to eat. What are we gonna make with these scraps with fish in it? If it was just day-old bread I could make some bread pudding or something, but what am I gonna do with this old fish and this old bread? God left the fish and the bread so you could remember what he brought you through before. And God knew that a storm was coming in your life, and he said, I want to leave an evidence in your life that when you needed me before, I've always been there. And every time you've ever been in trouble, I brought you through.