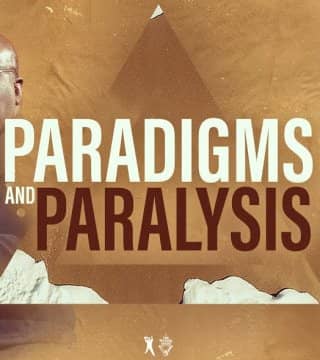 Now watch this. The paralysis has been there longer than the presence of God. So paradigm shifts, though desired, become difficult when the paralysis is more normal than the shift. This is one of the hardest miracles in the Bible, you got two disciples, not one, two. Instead of one disciple has raised the dead by himself, you got two ganging this devil walking up into our prayer, saying, "Silver and gold have I none; but such as I have give I unto thee". They spoke the right word, they prayed the right prayer, "In the name of Jesus Christ of Nazareth rise up and walk".

The name of Jesus is so powerful that the disciples were beaten for preaching in his name, they were forbidden to go into certain cities with his name, 'cause every time they said the name of Jesus a yoke broke, scales fell off eyes, lame men stood up and started walking, blind men started seeing, dead men got up out the grave; and they beat them and said just don't say his name. And they used the name but the man didn't get up, I'd like to say he got up, this is a place where I'm supposed to close the message and say, "Aah, he got up," but he didn't get up. They said the right name, they were in agreement, the Bible said, "If any two of you agree as touching anything on earth it shall be done".

I thought the story was over then, it should've been over but he was still laying there, and then Peter reached down and took him by the hand. When he took him by the hand, I said wait a minute, Peter, you don't understand, ain't nothing wrong with his hand. Why did you grab what was working when you was praying about what wasn't working? Why didn't you lay hands on his ankles? Why didn't you touch this problem? See, the reason you can't get up is that you keep laying hands on your problem and not your power. As long as you lay hands on your problem and not your power you'll never get up.

This is a prophetic Word, this is a prophetic Word. God is not going to touch what's broken, he's going to touch what's blessed. Good God of mercy. And the reason you've been in the same spot so long is that your mind keeps drifting to your ankles, and your mind is on your ankles when God is trying to get you to stretch forth your hand. The power is in your hand, it's not in your ankles; it's not in rehearsing what's wrong, it's not in reminding yourself of who left you, who hurt you, who deserted you, who fired you, who forsook you. God said it's in your hand. "He took him by the hand... and immediately his ankles received strength".

Better has responsibility, and responsibility is scary when you have been lame from your mother's womb. All you ever saw was broken, and when all you ever saw was broken, well is scary, well is scary. Are you scared to get up? Are you scared to get better? I understand, I know what it is, I've been frightened too. I know what it is to have better right in front of me and be so scared I couldn't even sleep. I'm not judging you, better is scary. Do I have enough? Can I walk? Shall I walk? Must I walk? How do I walk?

That's why I called it "Paralysis and Paradigms" because both of them are in the text, the paralysis and the paradigm. In one moment, his ankles received strength. Do you know how unlikely it is for your ankles to receive strength in a moment? Do you know a surgery couldn't do that? To cause your ankles to... if you had surgery, you would have to go through rehab. This man has never walked, good God. You think the biggest part of the miracle is that his ankles received strength? No, the biggest part is that he stood up and started walking. Even if his ankles got better, they have never made those movements before, those muscles have never worked with those nerve endings and those joints in concert to produce movement; that requires therapy.

But in spite of the pandemic, in spite of the paralysis, that that you viewed from afar off you're about to walk into, and God said you're gonna leap into it. You're not just going to walk, you're gonna leap into it. And when you get in there you're gonna praise God in there, 'cause you're gonna know that if it had not been for the Lord that was on your side, you never would've got there. Do you hear what I'm saying to you? You've been close to it every day but you'd never went into it, you've been in a cycle that kept brought you near-near-near, you've been at the gate of it a long time, but God is getting ready to move you away from that gate and he's gonna bring you into the temple.

See, everybody else in there could already walk and leap, so that was normal to them and they had taken it for granted, but this man had been locked out of it so long that once God opened it up for him, he was praising God for what was ordinary to other people. Let me tell you something. When the shift is over, the have-nots are gonna have. And the difference between the have-nots having and those that have having is that, when you've always had it you don't appreciate it. But when you've always been locked out and God finally opens up the door for you to get in, you don't just walk and leap, you also praise God because you remember how long you were stuck outside the gate.

You need to make the kind of associations that are not codependent; those people who have been carrying you have been enabling your dysfunction. They look like your friends but they're not, they're helping you to be crippled. Get away from people who are helping you to be crippled and get around somebody who demands something of you. I know you think they're your friends 'cause they carried you every day and laid you at the gate, but they're not your friends, they're your enablers. All the people who are enabling you to stay down, get away from them, get around people who challenge you, who yank on you, who pull on you.

I got more people tuned in, logging in, watching; you tuned in 'cause you're scared but you have made no real commitment to Christ. You want the pacifier, you don't want no milk. A pacifier's designed to fool a baby, it gives them the feel of sucking in, they ain't getting no milk. You turned me on to be a pacifier, but God wants to give you the sincere milk of the Word. And sitting here watching me right now and something about that message spoke all the way down to your ankles. I'm telling you there's gonna be a paradigm shift but you're gonna have to be responsible enough to throw down your crutches and get rid of your crutch-like friends and stand up on your feet and start walking and leaping and praising the Lord. God is shaking up your life because he wants change, he wants change.